On June 19, 1884, USC celebrated its first graduating class of three students. Thousands have since followed in their footsteps through USC commencement history, though the rite of passage has changed over 135 years.

In the early 1900s, graduates gathered on the lawn of the Bovard Administration Building. Later in the 1920s and 1930s, students lined up for their diplomas on the field of the Coliseum. A few decades later, USC held two commencement ceremonies, one at the end of the school year and one between semesters. Today, the practice of holding two main commencement programs has been retired, though individual schools celebrate graduates in smaller ceremonies across USC’s campuses.

USC’s main commencement ceremony is now held every May in Alumni Park on the University Park Campus. The Class of 2019 had more than 19,000 graduates across the university’s degree programs received their diplomas. An audience of more than 60,000 family members and friends joined the faculty and staff in cheering them on.

Among the 2019 graduates were Lance Raby MBA ’19 and Hillary Kritt MBA ’19, seen here smiling for the camera as Alex Schmitt MBA ’19 snaps their photo. The USC Marshall School of Business graduates have been friends since they met during the first few days of class.

In the inset photo from 1980, Lisa Bert ’80 poses with Bruce Larson ’80 as her father, Malcolm Bert ’54, takes a snapshot after the mid-year ceremony, held in January. The newly minted graduate was part of a long line of USC commencement traditions in her family: In addition to her father, her grandfather Vincent Bledsoe ’24; grandmother Dorothy Roberts Bledsoe ’24; mother Jean Bledsoe Bert ’53; and brother Greg Bert ’80 were all proud alumni.

At the 2019 main ceremony, U.S. Rep. Karen Bass gave the commencement address, an annual rite of passage for graduates. USC’s commencement tradition started with the first graduating Class of 1884 (the speaker was the brother of Marion Bovard, USC’s first president), but in the 1930s there were no speakers at all. By 1942, the university changed its stance, once again inviting commencement speakers who embody Trojan ideals. Since then, presenters have included humanitarians, industry leaders, governors and even the first man on the Moon.

One thing that hasn’t changed? Taking cap-and-gown pictures in front of the Trojan Shrine. Students line up in the days before commencement to take photos at the spot next to the Bovard Administration Building. Other picture-perfect backdrops: the Mudd Hall of Philosophy’s Romanesque columns, the steps at the Tutor Campus Center (marked with the five traits of a Trojan) and the stately brickwork of the Bovard Administration Building. 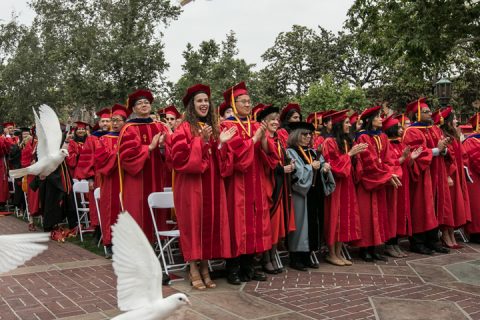 The Class of 2019 is sent off with inspiring words from valedictorian Ivana Giang, interim President Wanda M. Austin and U.S. Rep. Karen Bass. 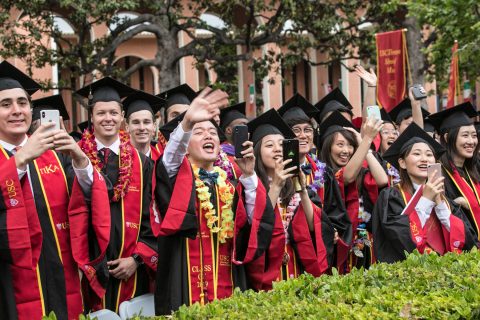 USC commencement 2019: The day in pictures

Our photographers share some of their favorite images of a memorable day. 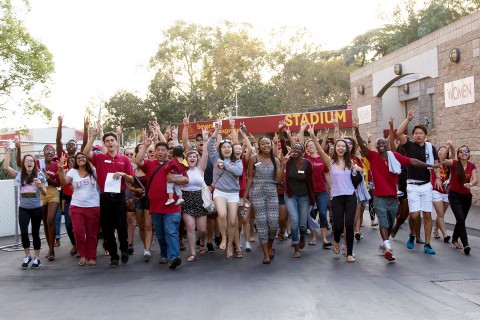