There’s no official dress code for USC students at commencement beyond the university’s traditional robes. But look at any graduation photo from recent years and you might think otherwise.

You’ll be hard-pressed to find a female student wearing something other than a white graduation dress under her regalia.

“It’s kind of an implicit rule, if you will, to wear a white dress,” said sophomore Jillian Pih, president of the USC Helenes, the oldest all-female service organization on campus. “You would definitely stand out if you were wearing, say, a black dress or a bright red dress.” 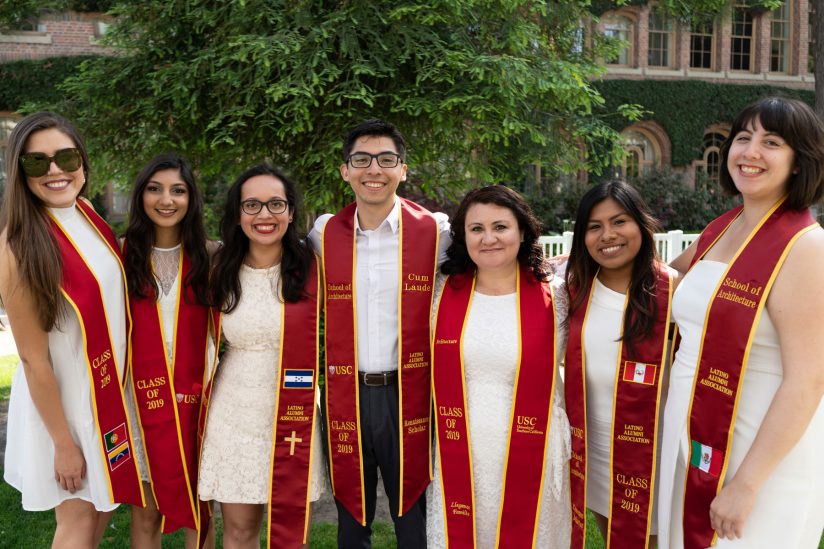 It’s a tradition that’s simply been passed down by word of mouth and observation, according to graduating senior Nikki Villarosa: “I saw it at the end of my freshman year — a bunch of girls in white dresses with their sashes, and I was like, ‘Oh, so this is what I’m supposed to do.’”

Neither Pih nor Villarosa knows when the tradition started, but wearing white dresses to graduation isn’t specific to USC or even to college commencement ceremonies. It seems to be more common at high school graduations, especially at private schools. At some high school commencement ceremonies, female students often carry a bouquet in addition to donning a white dress — the preparation for which a 2008 New York Times article likened to shopping for a wedding dress.

This tradition is upheld by the College of Charleston in South Carolina, where caps and gowns are eschewed entirely in favor of white dresses and roses. Atlanta-based Spelman College, an all-women’s school and one of the nation’s historically black colleges and universities, requires its seniors to wear a white dress to graduation and other official occasions. The practice is meant to create a uniform appearance and denote “the significance of the event.” It’s been a tradition since about 1900.

If there isn’t a photo of you in your sash, did you even graduate? Here are some of the most iconic (not to mention ’grammable) spots for commencement photos on campus, courtesy of the USC Helenes.

How the white commencement dress came to be at USC

Wearing white dresses to USC’s commencement, or at least the widespread upholding of the tradition, seems to be more recent, though. Villarosa was curious about the ritual, so she asked her mom if she and her classmates wore white dresses when awarded their diplomas. Her mom graduated from USC in the early ’80s.

Even across the pond, the trend seems to be gaining traction. As Alison Dawson, the head of public and ceremonial events at Bristol University, noted in a 2017 Telegraph article that many students are trading the traditional British graduation look of a white shirt and black skirt for “increasingly, a plain white dress.”

But it’s really so much more than just a plain white dress. Ask Steve Barth, assistant professor for business and entrepreneurship at the USC Iovine and Young Academy. These days, the story that a purchased item can inspire or evoke is just as important, if not more so, than the item itself. The white commencement dress is a prime example.

Whether students get a form-fitting sleeveless dress or one that’s short and flouncy, what they’re really buying is the opportunity to be part of a tradition.

“Millennials are much more interested in the experience value that they’re getting for their money. They’re looking for memories more than they’re looking for things,” Barth said. The idea seems to be upheld by Gen Z-ers as well.

“A lot of generations are kind of getting sick of stuff,” he added. “We value that experience, and the story that we will get to tell, more and more.”

What the white graduation dress means, to students and beyond

Villarosa bought her white dress online after much conferring with her roommates and friends. She landed on one with a skater silhouette from Nordstrom. But it’s the experience of shopping for it and wearing it alongside her fellow white-clad classmates that will likely engrain itself into her memory.

Beyond the uniformity of a single color, a lot can be read into the significance of wearing white. It’s the traditional color of a wedding gown, with symbolism steeped in purity. It was also the color chosen by the suffragettes—women fighting to procure the right to vote in Great Britain in the early 20th century—again, in part for its representation of purity. (Suffragettes thought that if they came across as feminine and virtuous, it would help their cause for equality).

It was also a color adopted by American suffragists, becoming an impressive visual tactic at rallies and marches. And the U.S. has seen “suffragette white” employed more recently as well, when a number of Democratic congresswomen wore it to President Donald Trump’s State of the Union address in February, a silent but powerful commentary about the ongoing fight for women’s rights.

Perhaps this all plays into the white dress commencement tradition, whether participants realize it or not.

In a 2015 Bustle article about what to wear to graduation, writer Melodi Erdogan suggests “classic white,” noting that, “white dresses usually mean something is going down.”

For USC senior Villarosa, the symbolic purity of white is as much about signifying “the start of something new…what’s next for me after college.”

White looks really good with the colors of our university, and it really pops with the black cap and gown, and the red sash.

The tradition serves a much simpler purpose, too: photography. “White looks really good with the colors of our university, and it really pops with the black cap and gown, and the red sash,” said USC sophomore Pih. And in the age of Instagram, that graduation picture is worth a thousand likes.

Whatever the reason for the white dress, wearing one reminds students of the hard work that went into reaching this milestone, and that they’re part of something larger than themselves.

“I’m achieving a lifelong goal,” Villarosa said. “I feel very proud of the school that I go to, and [USC] is very traditional. From the beginning it’s been about tradition, so it’s nice to act on those concepts right to the end.”

Mounir Ghabrial turned down a lucrative offer from a major consulting firm to join a startup focused on improving access to healthy food in Los Angeles.

As a Trojan, Tingyee Chang discovered her passion for research. It guided the daughter of Taiwanese immigrants toward a double major in neuroscience and public policy.

The rise of the white dress ritual at USC commencement