More solar power. Zero-emission vehicles. Unveiling the five R’s of waste diversion. In this audio interview, USC’s Ellen Dux grabs her crystal ball and assesses what the future of sustainability might look like on campus.

What will sustainability look like 10 years from now at USC? What does the university plan to prioritize in order to create a greener campus? This is Steve Cimino with USC News, and I’m here today with Ellen Dux, associate director of the USC Office of Sustainability. Ellen, what are some of the major sustainability upgrades that we could see come to fruition over the next decade? 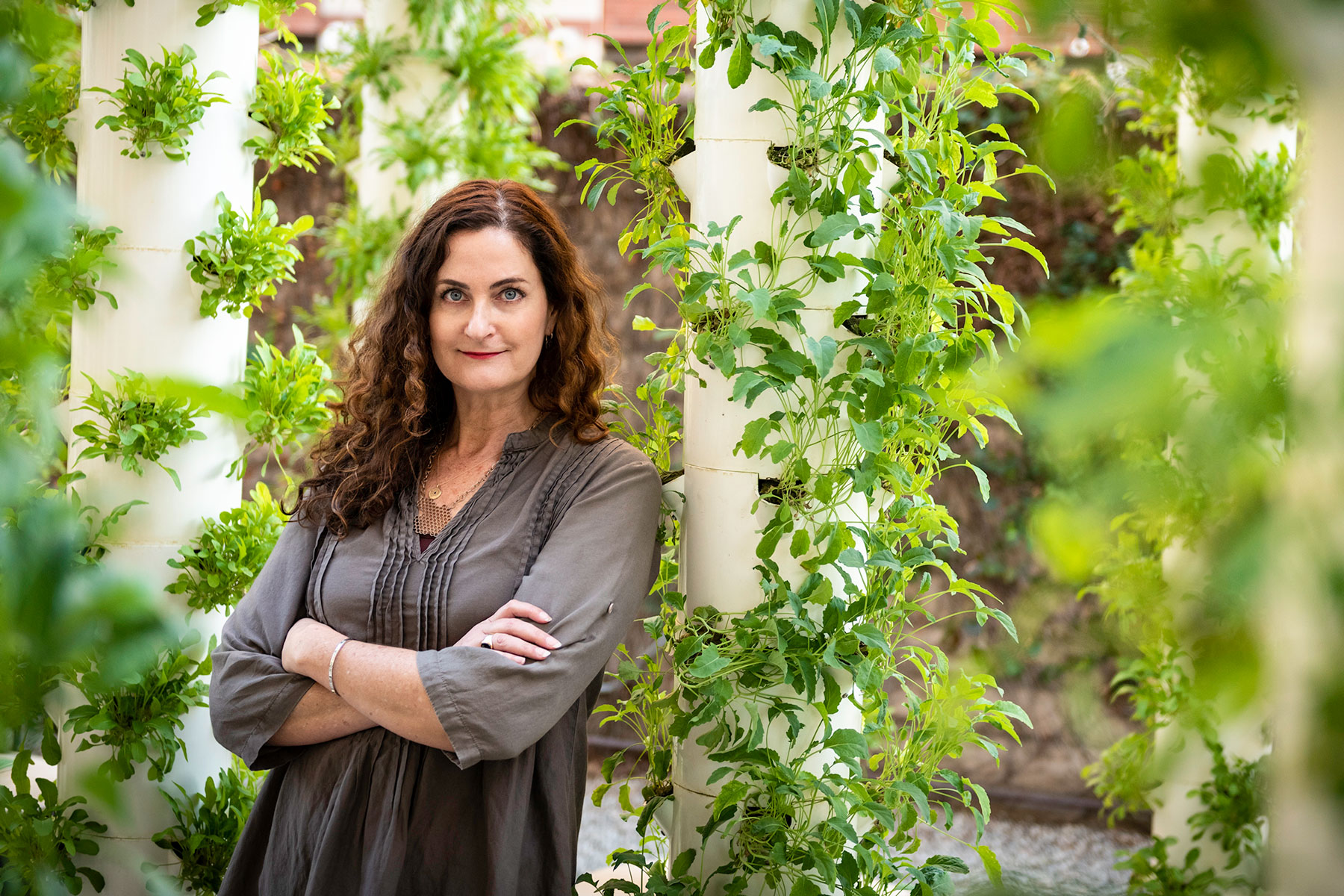 Thanks for having me on today to talk about this. As you can imagine, I’m extraordinarily excited and bullish about sustainability at USC over the next five to 10 years, because we’re going to see a lot of changes. We’re really waking up to sustainability on our campus.

If I had a crystal ball and was going to make a prediction, I’d say things that we’re all going to see in the Trojan community over the next decade will look like: lots more solar installations on campus at multiple locations, perhaps as much as around 2 megawatts, which is a lot. As you know, in the past year, we installed a huge solar array over on the Galen Center roof. Those panels are supplying about 15% of the arena’s energy needs now. We’re going to be looking to add more solar, probably on parking structures, a few of the residential apartments up on the University Park Campus and a couple of our campus buildings with big, open rooftops.

Other things I think we’re going to see, and we’re going to see them very soon, like when we come back in the fall, are a lot more robust waste diversion efforts so that less of our campus waste ends up in local landfills. This is a really big lift for us because it involves not just infrastructure deployment, which means new trashcans that can handle recycling and composting of waste, but also a lot of outreach to educate Trojans about changing our consumption behavior and patterns.

A lot of people are familiar with the three R’s: reduce, reuse and recycle. But in reality, there are five R’s, Steve, that we’re all going to have to learn to follow. The big five R’s of waste diversion are: refuse, reduce, reuse, recycle and rot, which is compost.

That’s a big increase in R’s, Ellen, but I think we’ll manage. What is that going to mean on campus?

So at USC, that’s going to look like new waste diversion bins, inside and outside of buildings, new green purchasing policies, eliminating single-use plastic bottles and hopefully other single-use plastic waste from campus as well, and really looking into every step of our consumption chain to see where we can drive waste out of it. You’re going to see some of those changes starting when we get back to school in the fall.

A few more things I would note: We’re going to be adding more zero-emission vehicles to our USC fleet. We have over 800 vehicles in our fleet, and most of them currently are internal combustion engines. So as they age and we replace them, we’ll be replacing them with EVs wherever possible. And that also includes our buses, which I’m particularly excited about because, as you know, our buses don’t just drive around on our campus. They drive around in our community. So the idea of having EV buses that we could possibly purchase locally, because there are one or two bus manufacturers in Los Angeles building EV buses currently, and that they’ll go out into our community — particularly in between the University Park and the Health Science campuses — and not be spewing toxic fumes and not be loud as they rumble around our neighbors’ streets, I think is a real win for us.

That all sounds great. I know that, to help guide some of these upgrades, your office put out an 11-question survey on the future of sustainability at USC. What were those responses like?

That’s a great question. The Office of Sustainability put that survey out back in 2019 because we really wanted to hear from the Trojan community — faculty, students and staff — about what they prioritized about sustainability in our community. We did that as sort of a launching of an effort to start developing USC’s next long-range sustainability plan, which we are calling the 2028 Plan. We knew we were getting to the end of our first sustainability plan, which is the 2020 Plan. It, in fact, wrapped up on Dec. 31 of this past year. And we were going to do a yearlong effort developing our next plan. So we thought, “Let’s hear from people who are boots on the ground, living on our campus, and see what people want and what they know and don’t know about sustainability at USC.”

The results were super surprising. First of all, we had a huge uptake on the survey. We had close to 1,100 responses, which is fantastic. Way more students but a good smattering of staff and faculty as well. Far and away, what we heard consistently from folks is that they are very, very interested in understanding what is going on and what is not going on with plastic use on our campus and waste diversion. Those ranked as the No. 1 and No. 2 responses, ahead of renewable energy. I think there’s a really big opportunity here for USC to make changes that will really resonate with the Trojan community and really move the needle to pull some of our waste out of local landfills.

Ellen, you mentioned the 2028 Plan and the end of the 2020 Plan. How does the new plan differ from the one that just finished up?

So the 2020 Plan for sustainability at USC was launched in 2015; it was a five-year plan. We like to call it “the foundation laid” and a promise to where we knew we’d grow with sustainability at USC. There were goals in five or six major areas: energy, waste, water, transportation and procurement. And the goals were moderately aggressive: our energy reduction use called for a 20% reduction in greenhouse gas emissions, our water reduction was around 20% as well in potable water use. We had a very aggressive waste goal, which was calling for a zero waste campus, or a 90% reduction in our waste diversion efforts.

And we hit about three-quarters of those goals when we wrapped the plan up at the end of this past year. So when we started last year in the Office of Sustainability to build our 2028 Plan for USC, we really looked closely at where the city is going. We determined that, as a good citizen of Los Angeles, we have to go where the city is going. And because we’re smaller than the overall city of Los Angeles, we should get there faster. We shouldn’t be waiting for the city goals of 2040 and just moving along at the same speed. Let’s be more aggressive.

The great news is, as people at USC are aware, we have a wonderful new president. President [Carol L.] Folt joined us in the summer of 2019, and she comes to USC with a huge sustainability background. She very quickly called for sustainability to be one of the four strategic priorities of her presidency. And that really just strapped rockets to our feet. She came to USC just as we were beginning the 2028 planning process, and we came back around to her and said, “Well, this is where we think USC can be going, heading toward carbon neutrality, heading toward a zero waste campus, water reduction goals, that kind of thing.” And she said, “Great, I love what you’re thinking. Now move it up by a decade.”

So what you’re going to see when we launch our 2028 Plan, which we are hoping to do this fall, is a call for a carbon-neutral campus by the end of this decade. A call for a zero waste campus, which I had mentioned earlier is a 90% reduction of waste going to landfill, pulling waste out via composting, recycling and talking about the big 5, just stopping making certain purchases, particularly plastic purchases all together. And a lot of the kind of projects and initiatives that we are putting into the 2028 Plan to achieve those kinds of aggressive goals look like things we talked about a little earlier.

Ellen, that’s a laundry list of extremely important leaps forward to come. And your enthusiasm around it all is really infectious. Personally and professionally, what is USC embarking on sustainability-wise that you’re most excited about?

There’s a lot to pick from! But I would say, at USC, what I’m excited to see is that we’re really waking up to this challenge, particularly students, who are literally leading the way. I was mentioning earlier that President Folt has galvanized this at USC, but she’s doing that in real partnership with students. They were some of the earliest voices on our campus, really begging USC to do better, insisting that USC do better with regard to sustainability. So to watch students kind of waking up to the realization of just how important and strong their voice is in this dialogue is fascinating to see, and I am so excited about helping them to come to that understanding.

When we look at USC in 2028, vis-à-vis sustainability, we’re not even going to recognize how far we’ve come and how different it looks than it did in 2020. So to think that I and my team can be a part of that process is just super exciting.

Ellen, thanks so much for talking sustainability at USC with us. We really appreciate it.

Thanks, Steve! Thanks for helping us get the word out about sustainability. It’s a big tent; there’s room for everybody.

In two high-profile public appearances, the president also detailed USC’s efforts to combat the local — and global — effects of climate change and COVID-19.

🎧 Predicting the future of sustainability at USC