In an aspirational address blending her environmental vision and values, USC President Carol L. Folt described a university transforming into a force for sustainability during a speech to green business and civic leaders in downtown Los Angeles.

At the VerdeXchange 2020 conference on Tuesday, Folt told a crowd of hundreds of representatives from cleantech companies, financial institutions and local governments that sustainability will be a top priority for USC. 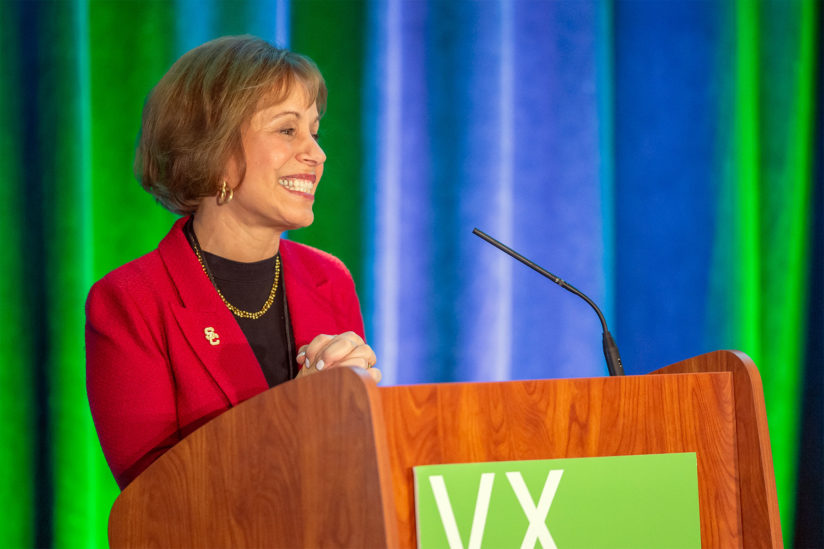 Universities occupy a special position in society, she said, noting that they are leaders in innovation, shaping ideas and developing technology for the future, training young people to do good and harnessing strategic partnerships to drive ingenuity across Los Angeles and urban centers across the globe.

“We’re looking for a whole new way of doing business,” Folt said. “We have a new level of expectation. Universities used to be able to teach about things, but no one really asked them if they walked the walk. So, I think this another big chance for us, not only to teach about [sustainability] but to actually start doing it.”

Folt described the need to slow climate change, reduce pollution and make big cities more livable. She also discussed the need for new sustainability curriculum for students, and to engage media, arts and cinema schools in the effort. She outlined operational changes, such as reviews for old buildings to identify waste and make them more energy efficient. She also envisions water conservation measures and carbon neutrality by 2025 to 2028, as well as widespread use of zero-emission vehicles.

President Folt expands upon her environmental vision for USC

Her comments mark the first time Folt has expounded her environmental vision since she was inaugurated as USC’s 12th president in September. Since then, the university has pivoted swiftly, notching short-term progress while building a foundation for long-term success.

Appropriately, Folt’s remarks were delivered to hundreds of leaders in government, cleantech business and NGOs at the annual VerdeXchange conference in downtown L.A. The meeting focuses on building a green economy in California.

L.A. Mayor Eric Garcetti introduced Folt to the audience, describing USC as an important partner in helping protect Southern California from environmental threats. The city and the university are seeking ways to work together, guided by Folt’s leadership and the city’s Green New Deal plan, unveiled by the mayor last year. The plan contains ambitious goals for energy and water conservation, efficient buildings and improved transportation.

Embracing change for USC, Folt’s vision for sustainability complements programs long advanced by L.A. regional officials and California leaders. The state leads the country in the fight to reduce carbon emissions that heat the planet, as well as efforts to fight smog, promote renewable energy and deploy zero-emissions vehicles.

At USC, early-action measures have moved the university forward and represent commitments for greater deeds to come. Among them, United Airlines Field at the Los Angeles Memorial Coliseum — managed by USC — has achieved zero waste for football games, and Folt reinstated a discount on bus and rail passes for USC employees, with the added benefit of reducing traffic. In addition, 38% of USC’s food purchases now come from sustainable sources, nearly double its original goal.

“Our impact on people is enormous,” Folt said, “and we need to think about the assets we have and how to reach people that want to make a difference in the world.

“If we do it at warp speed — with partnerships with our business and community leaders, in a way we’ve never done it before — this next decade really can be the decade” to begin turning the tide on the climate crisis, she said.

To ensure the work gets done right, USC has established a sustainability steering committee of faculty, staff and student leaders. The committee works with the university’s Office of Sustainability, which is developing a comprehensive, new master plan to guide USC environmental programs through 2028.

The plan, which will be finalized by year’s end, signals a call to action. Its reach extends beyond USC’s campuses to the local community. The sustainability measures will touch virtually every facet of the university. Among the measures under consideration:

USC’s sustainability plan is undergirded by a few strategic concepts currently under development. USC aims to help make big cities such as L.A. more sustainable and resilient against climate change, partner with other universities to maximize impact and expand affordability so more young people can go to colleges like USC and graduate with solutions to the challenges of the 21st century.

USC has more than 80,000 students, faculty and staff, plus more than 400,000 alumni. “Just think if we could empower all of them to make differences,” Folt said. “It is truly breathtaking in what it could mean.”

She recounted her experiences, through research and travel, learning about crashed global fish stocks, islands gradually submerged by rising sea levels, children exposed to contaminated drinking water, and scientists scrambling to respond to disease outbreaks due to weather shifts, as well as wildfires in Australia, her husband’s native country.

I’ve been working on and caring about [the environment] for a long time.

Folt explained that her vision for sustainability is driven by her deep passion for nature and her research and experiences as a biologist. It’s a passion that is equal parts personal and professional.

“I’ve been working on and caring about [the environment] for a long time,” she told the audience.

Going forward, USC officials are exploring which measures to include in the 2028 sustainability plan, which has been subject to numerous workshops and meetings over the past six months. A draft version is expected by April.

The aquatic biologist and noted academic leader returns to California to help the university write its next chapter.

As they celebrated women in science and engineering, leaders from the two universities recognized L.A. as the best place in the world to launch major sustainable projects.

Sage Tyler and Natalie Kra returned to the USC Wrigley Marine Science Center to lead the installation of a new lighting system designed to significantly reduce the center’s energy consumption.