On a misty Saturday morning, a giant crane lifted 1,100-pound pallets loaded with solar panels on top of the Galen Center. The heavy lift is a first step toward sustainability for the 14-year-old venue. Unlike many of the University Park Campus’s venerable Romanesque revival buildings, the center has a 50,000-square-foot roof strong enough to support tons of solar equipment.

Zelinda Welch, USC’s energy manager and USC Marshall School of Business alumna, watched the hoist — a milestone on a project she started almost two years ago.

“It was surreal,” she said. “One of my proudest days, to be honest. You work for so many years, on so many projects, to see something like this come to fruition. I’m still smiling, even though we have a long way to go.”

About half of the Galen Center’s 1,500 solar modules are now on top of the building. The rest will be hoisted in mid-March. When the system is fully operational this summer, it will supply as much as 15% of the center’s electricity and produce 915,000 kilowatt-hours annually — enough to power 88 houses for a year. The project is by far USC’s biggest foray into solar power.

“Universities have a special opportunity to really be in a leadership role,” Welch said. “I think it’s exciting to be at USC at this time and drive that change.”

Galen Center’s solar is part of a bigger picture

The Galen Center’s solar step is part of a green overhaul at the USC Athletics venue. Old arena lights have been replaced by LED fixtures. Fewer lamps are required, and wattage will drop by 40%.

“For fan experience and for our coaches and teams, the LED lights are a big improvement,” said Galen Center Manager Paul Neidermire. “They’re color-changing, and they come on just as fast as the lights in your house. The old lighting could take 20 minutes to cool and reboot after a power bump.”

We think of Galen as a big step that is helping us build the framework for our sustainable future.

In all, more than 3,000 LED light bulbs are going into the Galen Center. The lighting earned USC Athletics a $150,000 rebate from the Los Angeles Department of Water and Power.

The venue is also planning to install a pony chiller, a small motor that can be used when the arena’s two giant chillers aren’t needed for cooling. Welch estimates the combined energy savings could be $10 million over 25 years.

USC’s game against Arizona State on Saturday will be the Galen Center’s first “green game.” The goal is to divert waste from landfills. USC has twice won the Pac-12 Zero Waste Competition at the Los Angeles Memorial Coliseum. Zero waste is achieved when 90% of waste is diverted into compost and recycling.

“We want to make landfill obsolete,” said Joshua Sierra, zero-waste program specialist at USC. “That means getting fans on board with that process and working with vendors to eliminate as many nonrecyclable, non-compostable items as we can.”

At Saturday’s game, USC green team members will be on hand to help direct fans toward the correct waste streams. Sustainability messages will light up electronic displays inside the venue, and game announcements will encourage fans to help the arena move in a sustainable direction.

Sierra is keeping expectations for Galen’s first green game realistic, aiming for most improved in zero waste among Pac-12 universities.

Since taking office in September, President Carol L. Folt has made sustainability a priority. Goals include the elimination of single-use plastics, a reduction of greenhouse gases, expansion of waste diversion and more charging stations for electric vehicles. The efforts fall under a new sustainability master plan in development, which will take the university through 2028.

“We think of Galen as a big step that is helping us build the framework for our sustainable future,” said Ellen Dux, associate director at the USC Office of Sustainability and USC Marshall alumna. “This is how it starts. We’re building processes, partnerships, trust — all the elements we need so we can swing for the fences in the years to come and execute on the aggressive goals being considered for the 2028 sustainability plan.” 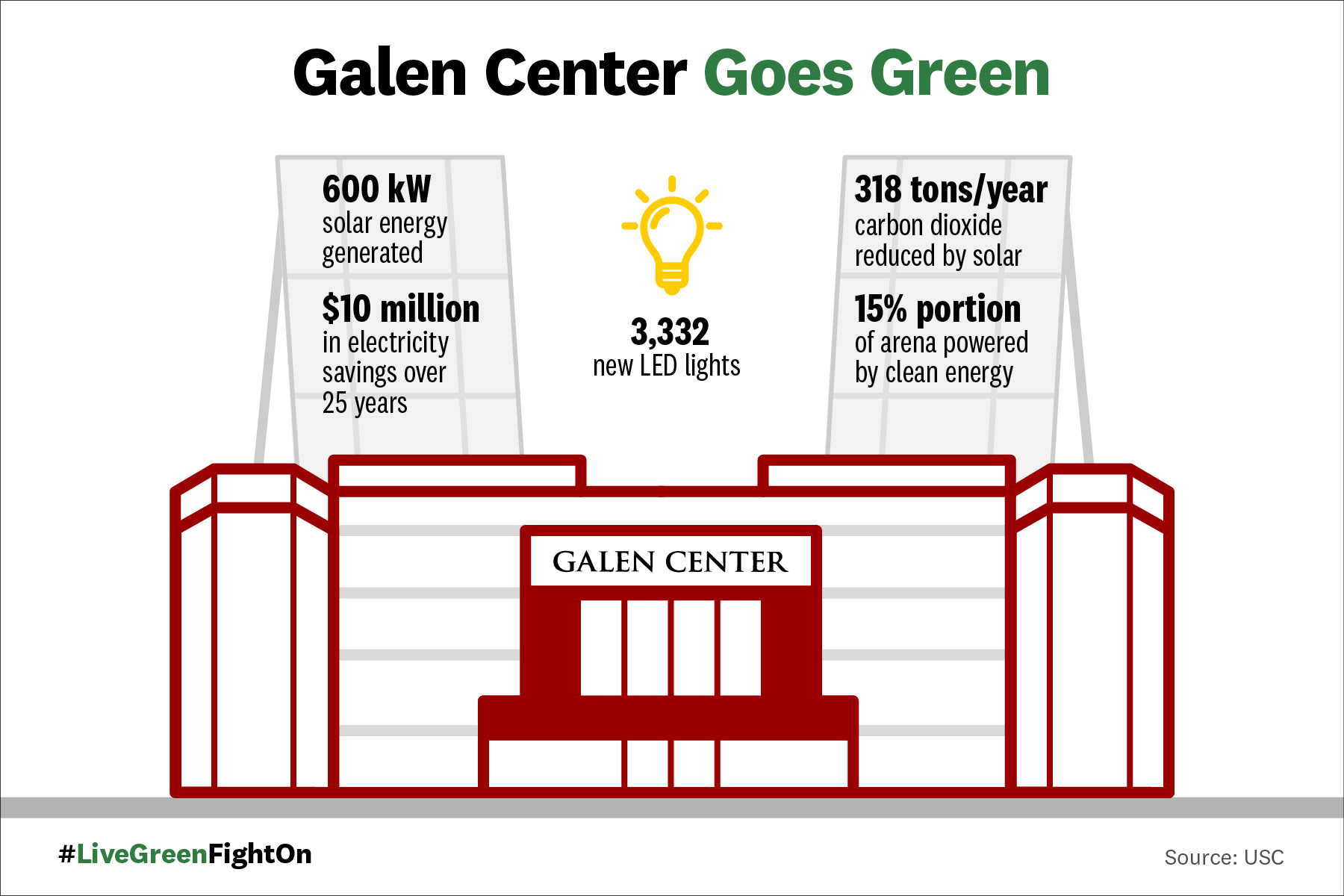 The USC Office of Sustainability has been recognized by L.A. County with a Green Leadership Award for making the Coliseum a zero waste facility.