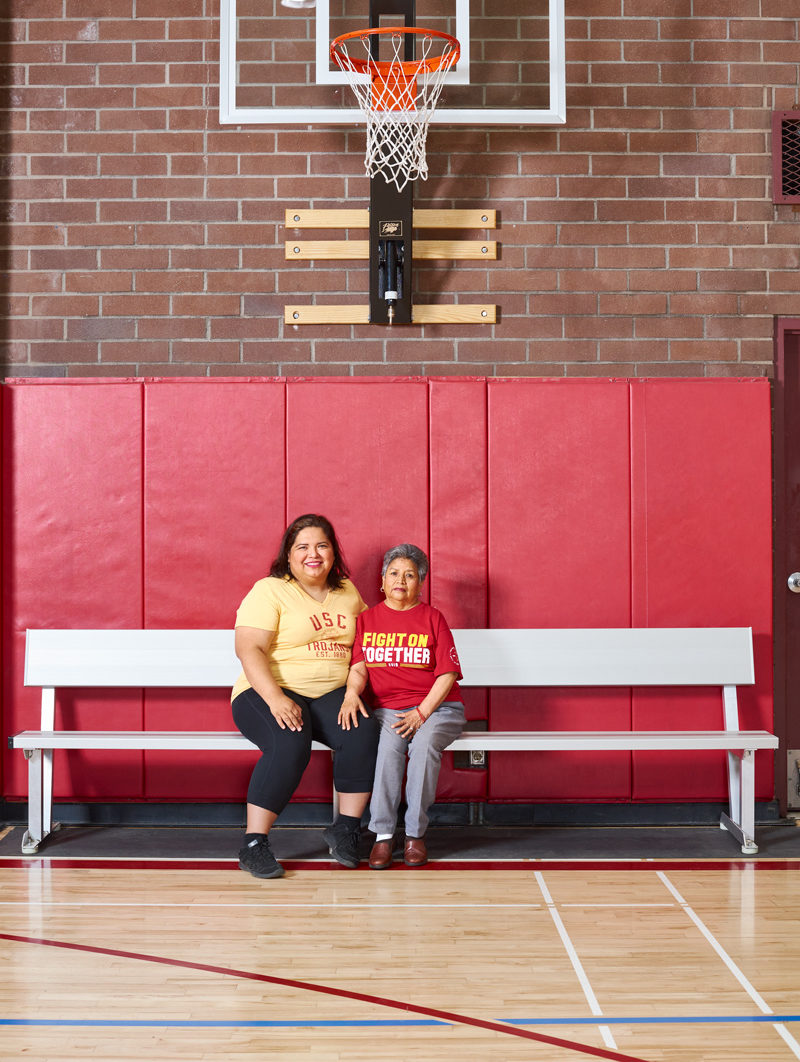 Three Dedicated Trojans Who Will Inspire You

Far from the spotlight, members of the Trojan Family make a big difference in the lives of others.

by By Joanna Clay, Rachel B. Levin and Constance Sommer
Autumn 2019

Doctors told Gloria Estrada she probably had six months to live. As if that weren’t enough, the chemotherapy coursing through her veins to stave off her stage 4 colon cancer was also damaging the nerves in her hands and legs, leaving her with debilitating pain and depression.

But eight years later, Estrada has defied predictions. Her cancer is in remission, and she can walk again — with the help of a cane — around her Boyle Heights neighborhood in Los Angeles. Estrada credits her recovery to her medical team and her “angel”: Ghecemy Lopez, a cancer navigation specialist at the USC Norris Comprehensive Cancer Center.

Lopez helps cancer patients juggle their treatments in an often complicated health care system and bolsters their spirits. “This is not a job,” Lopez explains. “This is my mission.”

Every day, Lopez changes lives, and she is in good company. USC has its share of uplifting Trojans. There are scientists tirelessly trying to find cures for devastating diseases, and students who have returned to college after hardship to better their lives. They’re inspiring others in quiet ways, far from the limelight. Read on to meet a few of them. 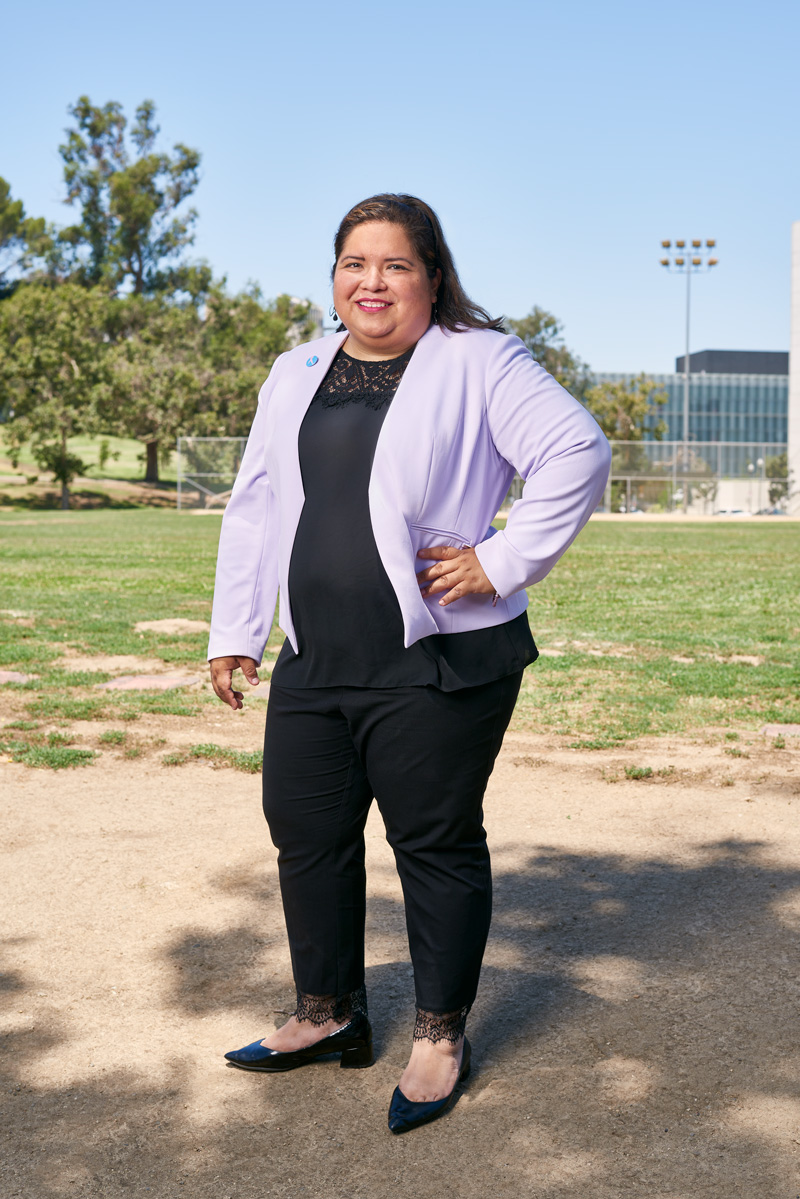 Story by Rachel B. Levin

Ghecemy Lopez had just earned her master’s degree in education and was working two jobs. She and her husband were talking about trying for their first baby. Then, while she was watching TV one night, she felt something in her breast that wasn’t supposed to be there.

It couldn’t be happening — not to a young adult who had only just turned 30 — but it was. Doctors diagnosed Lopez with what’s called triple-negative breast cancer, a form of the disease that defies many common cancer-fighting drugs. She also carried the inherited BRCA1 gene mutation, which raises the risk not only of breast cancer, but also several other tumors.

Time flew by in a blur. Because the cancer was growing rapidly, “I had to make the quick decision of starting chemotherapy with the warning that I could potentially become infertile for the rest of my life,” she remembers.

Fortunately, chemotherapy and surgeries beat back Lopez’s cancer. Then she battled through thyroid cancer two years later. As she climbed out of the experience, a new life’s purpose came into focus: advocacy for cancer patients facing similar challenges. “I felt an urgency to be able to pay back for my opportunity to live again,” she says.

Lopez began volunteering on patient boards at hospitals and in cancer education outreach programs in low-income areas of Los Angeles. In 2014, the National Breast Cancer Coalition recognized her work with its Grassroots Advocacy Award.

When the Ronnie Lippin Cancer Support and Navigation Program began in 2015 at USC Norris cancer center with help from the Tower Cancer Research Foundation, “I felt like all the stars aligned and made this program happen,” Lopez says.

Today, Lopez manages the program and compassionately walks patients through the cancer journey and makes it a little less frightening. Since launching the program, she counts more than 400 patients and their family members who have participated in the program. For patients, she says, “the most difficult thing is not having enough time to gather information, to process information, to make the appropriate decisions. If we don’t have guidance, we feel overwhelmed.”

Many patients in the program live paycheck to paycheck and struggle to speak English — much less understand the complexities of cancer. On any given day, Lopez may give rides to patients who don’t have transportation, accompany them to important doctor’s appointments, or connect them with community agencies to help them find daycare for their kids.

For Rodrigo Torres, one barrier was money: A medication for his lymphoma would cost the El Sereno retiree about $1,067 per day. Lopez swiftly stepped in, helping him apply for Medi-Cal assistance and private funding that offset the cost.

Lopez established a bond with Torres and his wife, Yolanda — and when Torres died in 2017 at age 79 of a stroke, Lopez supported his wife through the loss. Even today, Lopez keeps a photo of Torres above her desk. “She has a big heart,” Yolanda Torres says.

Lopez understands how cancer can transform and upend priorities. She has lived through it herself and aims to help patients focus on what’s important. A dedicated patient advocate, she’s also on track to receive her doctoral degree in social work from the USC Suzanne Dworak-Peck School of Social Work in May.

“I don’t sweat the little things that I used to sweat prior to cancer,” Lopez says. “Just being alive and doing this, it’s a blessing already.” 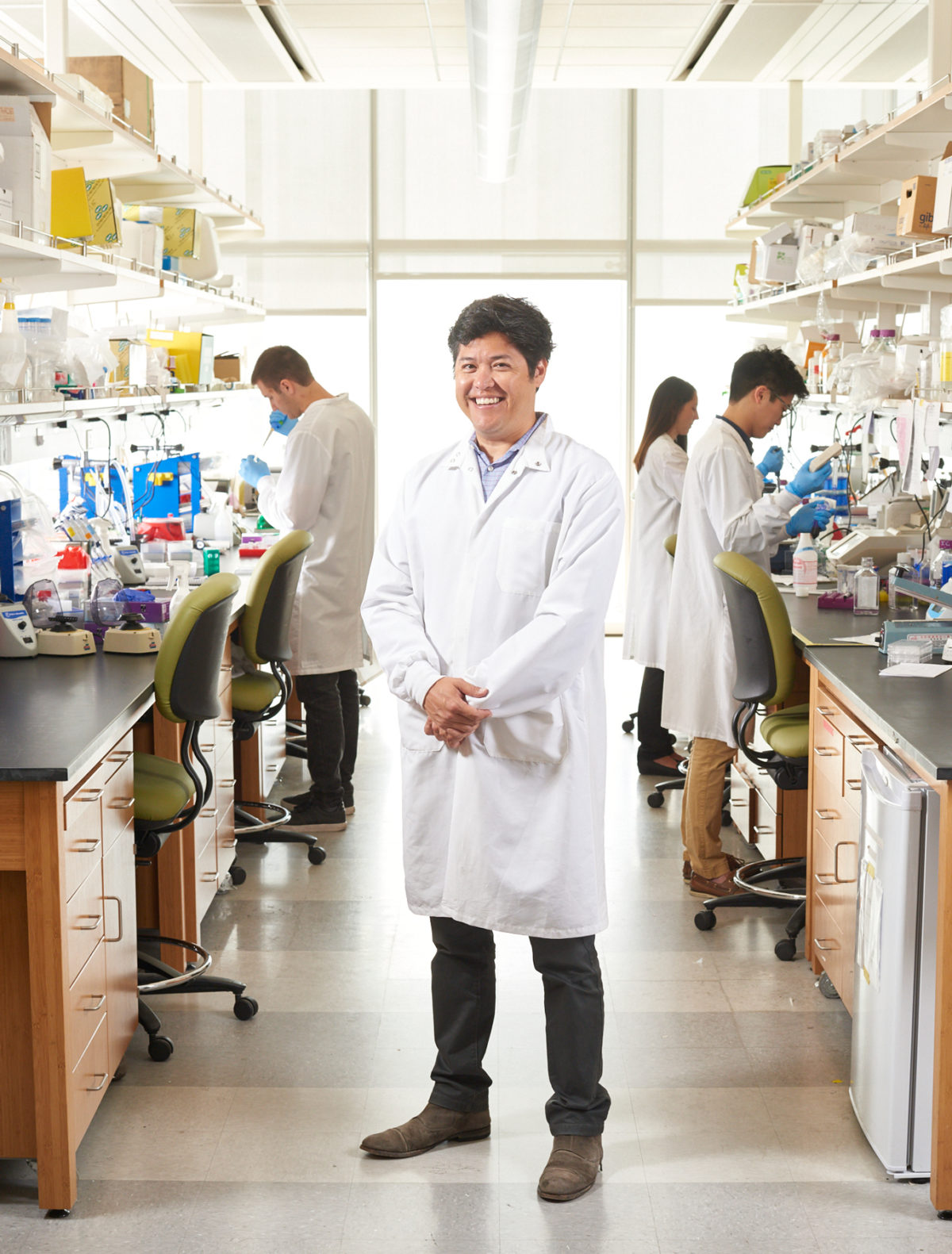 HIS RACE AGAINST ALS: JUSTIN ICHIDA

Justin Ichida regularly gets emails from strangers asking the same urgent question: “Will your research on ALS be done in time to save my life?”

The emails are a constant reminder that he’s in a race against time. “I don’t really know them, but they tell me their whole story,” says Ichida, Richard N. Merkin Assistant Professor of Stem Cell Biology and Regenerative Medicine and a scientist with the USC Stem Cell program. He hopes one day to have the answers they want to hear.

Ichida studies the genetic components of ALS, also known as amyotrophic lateral sclerosis or Lou Gehrig’s disease, to seek a cure for the progressive neurodegenerative condition. In 2018, his lab had a breakthrough, pinpointing a drug that seems to halt the progression of the disease in a certain type of ALS. About 10% of ALS patients have this type. The advance offered a sign of hope.

ALS attacks nerve cells in a steady march that weakens muscles, leaving the sufferer physically paralyzed but mentally intact. Those with ALS generally live only two to five years after diagnosis. “It’s our responsibility to put in 110% to make sure that we’re doing the best possible job in finding a cure for these people,” Ichida says.

Sometimes he wishes he could just lock the door of his lab and keep working until he finds an answer. He thinks about the women and men who are struggling — patients like Nanci Ryder.

Ichida first met the Hollywood publicist when Ryder visited his lab in 2015. A prolific ALS fundraiser with a ready sense of humor, she could still move and talk then. Her quick-fire jokes and sarcastic comments made Ichida laugh. But when Ichida went to see Ryder at her home the next year, he found ALS had completely paralyzed her. Health aides had put signs up on the wall reading “yes” and “no.” She responded to questions with her eyes, looking to one sign or the other. Yet her mind is likely as engaged as ever, Ichida says.

Relationships with people like Ryder motivate his nonstop search for a cure. Ichida’s love of science started as a child when he read Jurassic Park, the novel about the chaos that ensues after creating genetically engineered dinosaurs.

“The idea that all you needed was DNA to recreate life — I thought that was fascinating,” Ichida says. “I wanted to do that in real life.”

In a way, that’s exactly what his lab does. For years, scientists have been stymied by their inability to study living nerve cells. They’re inaccessible in patients who are alive. But researchers in Ichida’s USC lab managed to take skin cells from people who have ALS and, using DNA, converted those cells into motor neuron cells. Then they could watch those nerve cells act out ALS in a petri dish.

Ichida joined with other scientists and investors to launch a start-up business, AcuraStem, to focus on ALS drug therapy development. Otherwise, he fears, his discovery for the relatively small ALS market could get nowhere at a big pharmaceutical company with more lucrative targets.

Since forming in 2016, AcuraStem researchers have discovered many drug candidates that they’ve geared for human clinical trials. One day, they hope these drugs can be used by ALS patients to preserve or rescue their neurons before they lose the ability to walk, talk, swallow or breathe. With his inbox full of pleas from patients and their desperate loved ones, Ichida knows there’s no time to waste. 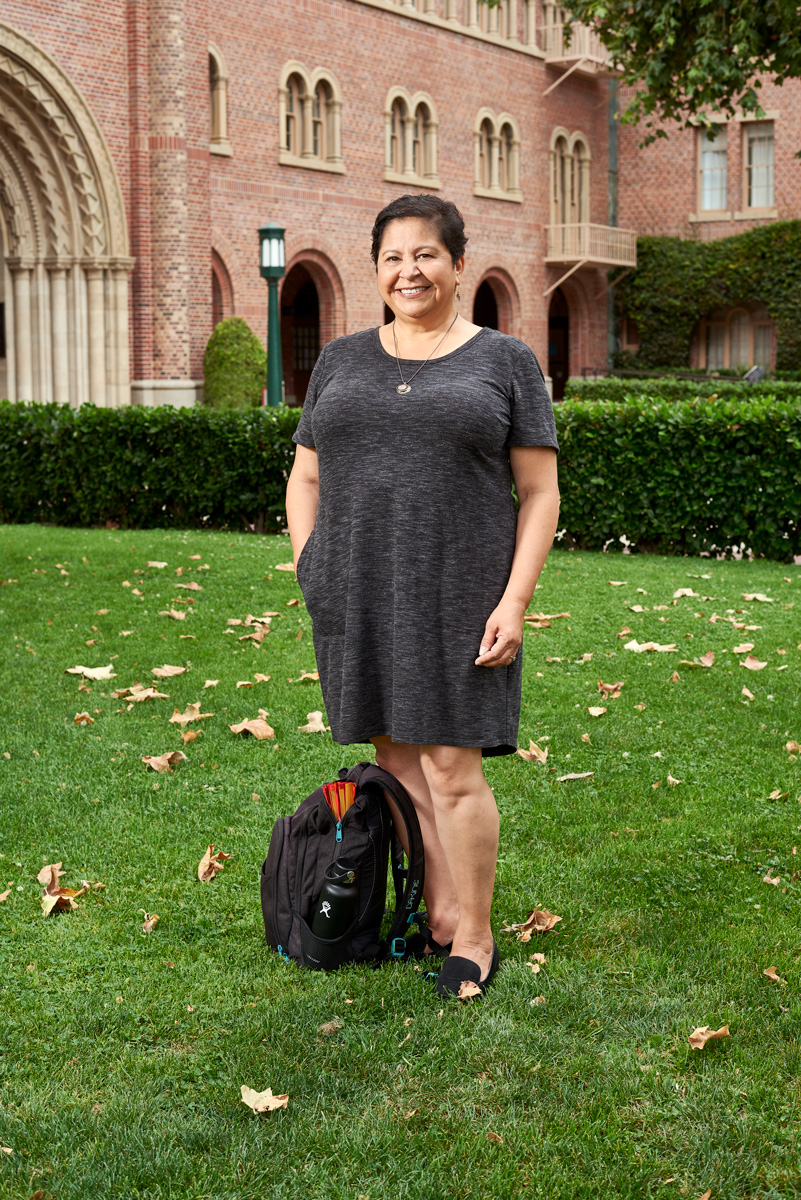 Every morning, Margarita Lopez is in her son Emilio’s room, getting him ready for the day.

She turns on KTLA 5 news, his favorite, and gets him dressed before using a lift to hoist him from the bed into his wheelchair. The young man — now 25 years old — has cerebral palsy. “It’s like one of those pit stops at a race,” Lopez says. “You just do it fast.”

Lopez moves quickly because she might be late for class. At age 59, she’s a senior studying psychology at the USC Dornsife College of Letters, Arts and Sciences. “I can’t believe I’ve done what I’ve done,” says Lopez, a Hawthorne resident. “It’s surreal.”

Education was always a priority in the Lopez household. Even though she never finished high school, she home-schooled her eight children for the bulk of their childhoods, later doing whatever she could to get them into elite private and public high schools — including volunteering at their schools — between a job at the craft store Michael’s and gigs cleaning homes. Many went on to four-year universities, including the University of California, San Diego, and the University of California, Berkeley.

But now, she’s the college student, thanks to the encouragement of her daughters—and a life-changing tragedy.

Her daughter Milanca had a son at age 16 yet went on to graduate from UC Berkeley. She was about to start graduate school at UCLA when she and her 6-year old boy were killed in a car accident. Milanca had encouraged her mom to chase her dream of higher education. “I found a message on Facebook. She said, ‘It’s your turn,’” Lopez says. “I never responded to her. It made me so sad. Here she was, encouraging me.”

Then when her daughter Emma told her she was enrolling in community college, Lopez realized it was time to see her own education through. “I felt it was my daughter [Milanca] urging me on,” she says. “That it was my turn. That I could do this.”

Lopez enrolled at Santa Monica College, where she experimented with everything from poetry readings to creative writing. The experience served as a springboard: She not only was accepted as a transfer to USC, which gave her a partial scholarship, but also to Columbia University, UCLA and UC Berkeley. She wants to be a counselor for young people from marginalized communities and is considering a master’s degree.

“This is a dream,” she says of going to USC. Her first year was tough, but her grades put her on the dean’s list and she joined the honors psychology program.

When her first kids graduated from college, she made T-shirts and flower leis for them. Then when she graduated in 2018 from Santa Monica College, she looked out into the crowd for her family — and they had made their own T-shirts to recognize her. She laughed. And they stacked her neck with leis — made from candy, money and flowers — so high that she could barely see.

She knows that this spring, her family will be there to root for her again. It’s her time. 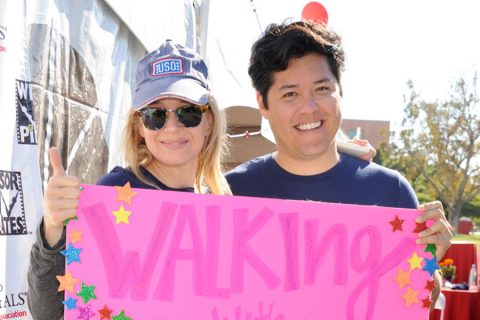 The USC scientist who aims to beat ALS, and the patients cheering him on

Justin Ichida gives his all to find a cure for Lou Gehrig’s disease because, for patients, the clock is ticking. 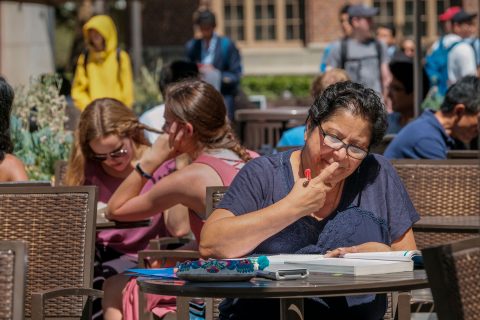 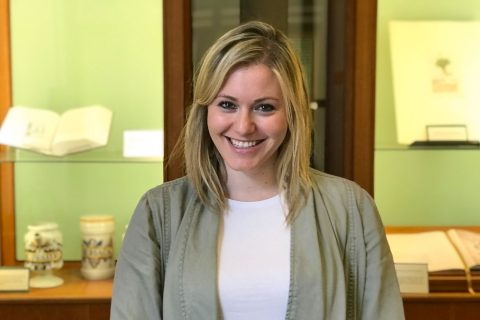 While in medical school, Margarita Ivanova got married, had a son and encouraged countless Los Angeles high schoolers to pursue health professions and work in the sciences.

Three Dedicated Trojans Who Will Inspire You