Margarita Lopez is in her son Emilio’s room, getting him ready for the day. Emilio, 22, has cerebral palsy.

She turns on the Channel 5 news, his favorite, and gets him dressed before using a lift to hoist him from the bed into his wheelchair. She buckles him in and will wheel him into the kitchen for breakfast. 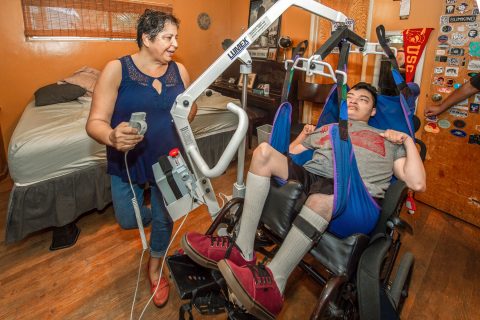 Margarita Lopez helps her son Emilio Lopez, 22, in the mornings before starting her own day as a USC student. (USC Photo/Gus Ruelas)

Lopez, 58, moves fast because she has to leave for school in a bit. It’s her first semester studying psychology at the USC Dornsife College of Letters, Arts and Sciences as a junior. Lopez transferred from Santa Monica College, where she earned her associate’s degree in the spring. If it weren’t for her kids, she would be the first in her family to go to college.

USC ranks No. 1 in the country for transfer students among private universities, according to the Association of American Universities. With roughly 1,450 such students, USC has almost the same number as all eight Ivy League universities combined.

Education was always a priority in the Lopez household. Even though she didn’t finish high school, she home-schooled her eight children for the bulk of their childhoods, later doing whatever she could to get them into elite private and public high schools — including volunteering at their schools — between a job at Michael’s and cleaning homes. Many went on to four-year universities, including the University of California, San Diego and the University of California, Berkeley.

But now, for probably the first time in Lopez’s life, she’s doing something just for her.

It started five years ago, when her daughter Emma asked to get a driver’s license and informed Lopez she was enrolling at a community college.

At the time, Lopez was reeling from the death of her daughter Milanca. Milanca, who was a high school valedictorian and had a child at 16, went on to graduate from UC Berkeley. She was about to start graduate school at UCLA when she and her 6-year-old son were killed in a car accident. Milanca had encouraged her mom to chase her dream of higher education. 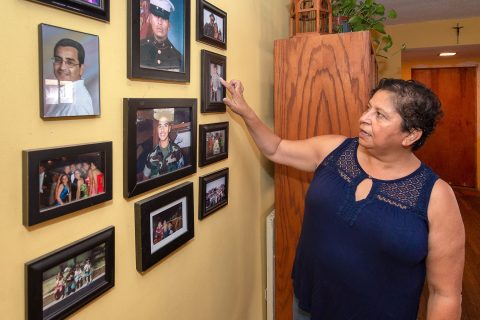 Five years ago, Lopez began to study while grieving her daughter and grandson’s death in a car accident. (USC Photo/Gus Ruelas)

“I found a message on Facebook. She said, ‘It’s your turn,’” Lopez said. “I never responded to her. It made me so sad. Here she was, encouraging me.”

That day, when Emma was pushing her, Lopez felt like it was time to see it through.

“I felt it was my daughter [Milanca] urging me on,” she said. “That it was my turn. That I could do this.”

But being in college later in life is a little scary, she said.

“School overwhelms me because I always think I can’t handle it, but I always seem to be able to do it,” she said.

As a kid, she loved school. But due to traumatic experiences growing up, she started to act out in high school, drinking and ditching class. When senior year rolled around, she didn’t have the credits to get her diploma. Soon after, at age 20, she’d get married to her husband Medardo.

A love of the classics

“I taught my children a love of learning,” she said. “I did home schooling. I learned with them.”

She loved reading, obsessed with classics such as To Kill a Mockingbird, The Count of Monte Cristo and Anna Karenina.

While at Santa Monica College, she found herself doing things she had never done before, like reading poetry aloud at a Westside bar and getting her creative writing published. 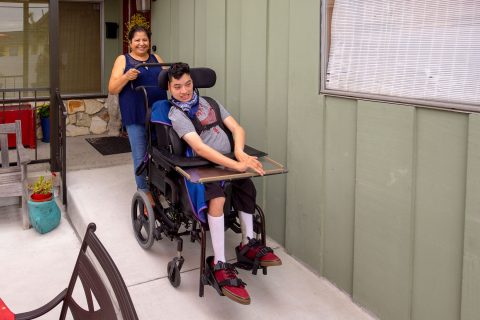 Lopez with her son. She got into four colleges and chose USC, and is living out her dreams, she said. (USC Photo/Gus Ruelas)

“If I never did anything after that,” she said of Santa Monica College, “I would be happy.”

But she ended up applying to transfer. She not only got into USC, which gave her a partial scholarship, but also Columbia University, UCLA and UC Berkeley. She wants to be a counselor for young people from marginalized communities and is considering a master’s degree.

“This is a dream,” she said of going to USC.

When her first kids graduated from college, she made T-shirts and themed leis for them. She remembers when she graduated in the spring from Santa Monica College and looked out into the crowd for her family.

“Everyone showed up at my graduation and they had T-shirts,” she said. “I see ‘Margarita [on the front] and they turn around and it said ‘badass’ on the back. I was laughing so hard.”

They stacked her neck with leis — made from candy, money and flowers — so high that she could barely see.

She knows, in a couple years, her family will be there to root her on again. It’s her turn.

A new Trojan at 36, he endured homelessness and more before settling in as a USC Annenberg student. Among private universities, USC ranks No. 1 for transfer students.

A lack of support once held back a USC Marshall student, but transferring to USC changed the direction of her life.