As Trojan 2020 and 2021 grads get ready to walk at the Los Angeles Memorial Coliseum, join us in our wayback machine. See how decades’ worth of Trojans celebrated at the stadium.

Ask Trojans about their proudest, most memorable day at USC, and for many, the answer is the same: commencement.

This year, those USC graduation photos might be even more special. Because of the COVID-19 pandemic, it will be the first time in more than a year that most students will come together and see each other in person. To reduce the risk of spreading the coronavirus, the Class of 2020 and Class of 2021 will celebrate commencement at the Los Angeles Memorial Coliseum instead of Alumni Park. For the first time, they’ll have to sit 6 feet apart and wear face masks during the event — but it turns out that celebrating at the Coliseum isn’t new at all.

It used to be a USC tradition.

For its first three decades, USC celebrated its graduating students at either Bovard Auditorium or the chapel inside the since-demolished Old College building. Commencement usually capped off a week of festivities — from goodbye breakfasts and banquets hosted by alumni to the ceremonial “burying of the hatchet” between the junior and senior class presidents.

But by 1924, USC had outgrown its campus venues as it prepared to send off 800 seniors and master’s students. To accommodate the largest graduating class in school history, administrators turned to a new neighbor: the Los Angeles Memorial Coliseum. Opened a year prior and seating 75,000 people, it was the world’s largest stadium at the time.

“Invitations have been sent to many of the Southland’s best-known citizens and Sunday is expected to prove a significant day in the university community,” the Daily Trojan reported in June 1924. On the big day, students gathered in their caps and gowns in front of Bovard Auditorium. Walking in a procession to the stadium, graduates entered through the peristyle and marched “down the greensward on the field of the giant bowl.” Music students and the marching band provided musical accompaniment, and faculty members and administrators awarded degrees from a decorated pavilion. The event was a hit. The historically large Class of 1924 kicked off a Coliseum commencement day tradition that lasted until 1950. Take a tour through their moment in time in our collection of USC graduation photos from an L.A. landmark.

USC’s rapid growth launched a new chapter for commencements as the program moved from the University Park Campus to the Coliseum. But the USC graduation ceremony was far from the only tradition that expanded due to the influx of students. In 1924, the Daily Trojan congratulated the El Rodeo editors for an unheard-of feat: the completion of an enormous 700-page yearbook.

As USC celebrated its 50th anniversary, student traditions began to take shape. The 1930-1931 Student Handbook outlined rules including memorizing university songs and showing a “hello and smile spirit” around campus. Freshmen and sophomores got a special warning never to wear corduroy or use certain walkways around Bovard Auditorium. Students of the 1930s were among the first to welcome the Trojan Shrine, more fondly known as Tommy Trojan, which was unveiled in June 1930. They also were the first to study in Doheny Memorial Library, which broke ground in 1932.

With many young men abroad serving in World War II, the 1943, 1944 and 1945 commencement ceremonies were held on the University Park Campus. The student community transformed as military training programs — including the Naval ROTC and Marine Corps Reserve — arrived. Civilian students joined wartime patriotic and relief efforts. After the war, student enrollment swelled to record levels as returning servicemen took advantage of the GI Bill, pushing enrollment to 24,000 at its peak in 1947. 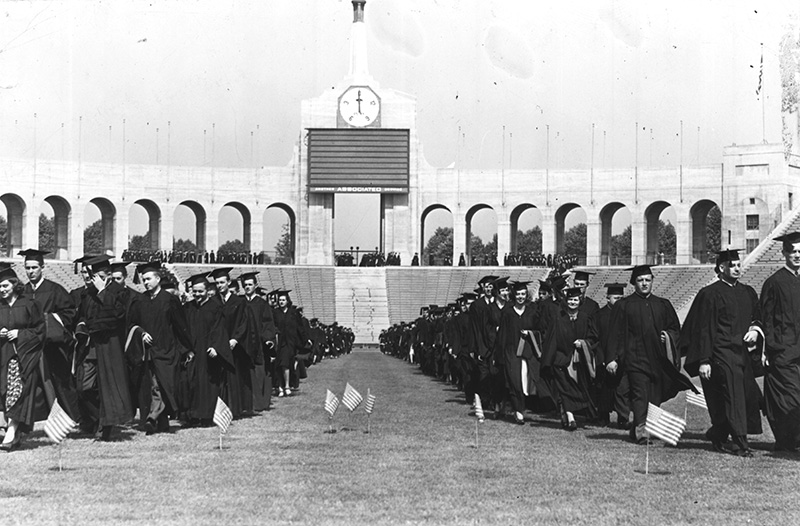 1940: American flags planted in the field help guide the Class of 1940 as they march to the graduation stage. (Photo/USC University Archives)

1950s: The Coliseum Tradition Comes to an End

The Class of 1950 — 6,274 strong — was the last group of graduates to march across the Coliseum field in graduation regalia, ending a 30-year tradition as the ceremony moved to Alumni Park the following year. Now, 71 years later, the famed stadium welcomes back students to celebrate the classes of 2020 and 2021. 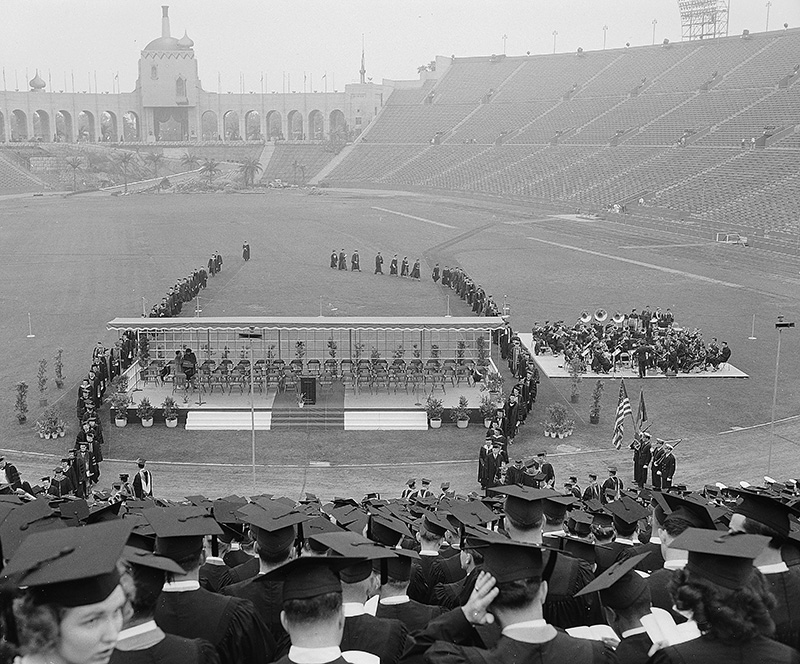 1950: A graduating students’ perspective from the stands shows the covered stage and podium. (Photo/USC University Archives) 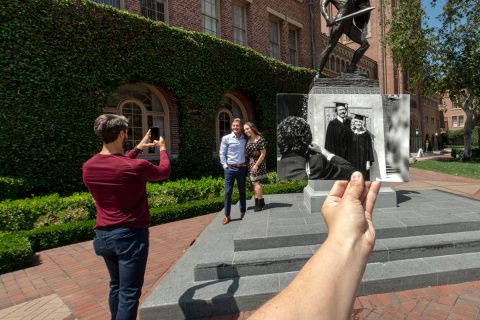 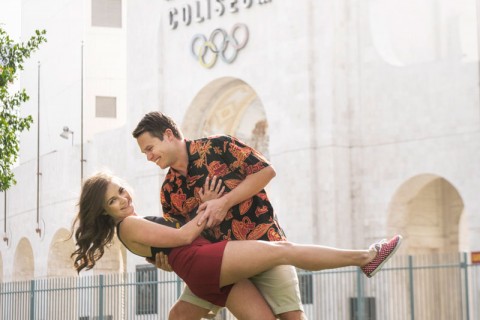