When Physics Students Couldn’t Go to Class, This Professor Mailed Class to Them

Longtime educator Jack Feinberg came up with fun kits to ship to students so they could still do physics experiments at home. It’s in his nature.

Have you ever timed how long it takes a rubber ball to hit the ground after you drop it? If so, you did a physics experiment.

You might not think of a toy ball as lab equipment, but it’s an incredibly effective device to teach students about gravity, the speed of sound and their brain’s reaction time.

Breaking down physics into simple lessons using everyday objects has been Jack Feinberg’s passion for 40 years. He knows the power of doing a hands-on experiment rather than watching a demonstration or video. The USC professor of physics, astronomy and electrical engineering likens it to the difference between playing a racing video game and taking a Formula One car for a lap on the track: “There really is no comparison.”

So when COVID-19 kept hundreds of USC undergrads from the physics labs on campus where they’d normally tinker with electrical circuits and magnets, Feinberg had to take action.

He sent hands-on experiments straight to his students.

What the Professor Did Last Summer: Tinker in the Garage

Feinberg planned to travel with his wife last summer, but the pandemic lockdown left him plenty of downtime to devise experiments students could do without a lab. He discarded setups that proved too tricky, boring, expensive or impractical — like one involving a glass pie plate and marshmallows that would reveal clues about the radiation inside microwaves. Shipping glass and food across borders proved too cumbersome. 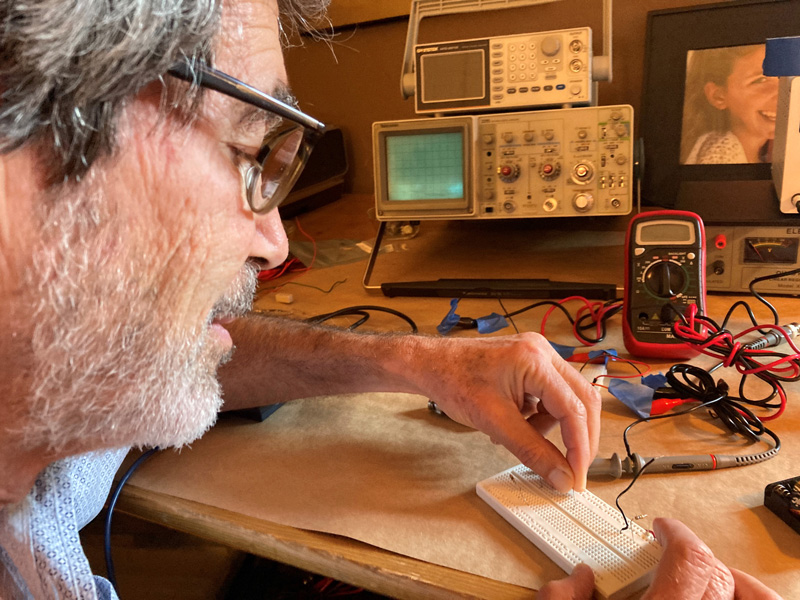 Jack Feinberg uses a kit to build circuits for an online class in electricity and magnetism. (Photo/Pam McKniff)

By the end, he had come up with dozens of hands-on experiments for students to do at home. “We couldn’t do really fancy-dancy stuff,” he says. “But you can show the basic principles of physics with some really simple equipment.”

With a lot of logistical planning and the help of a former student who runs a science supply store, Feinberg ensured more than 1,000 briefcase-size kits arrived at the doorsteps of students and teaching assistants. Nearly 100 of them traveled to places as far flung as South Korea, Brazil, India and Costa Rica. Their contents ranged from the specialized (oscilloscopes and voltmeters) to the low tech (plastic rulers, Slinky tubes and, yes, rubber balls).

He barely pulled it off.

In late May, Feinberg reached out to Anton Skorucak ’99, one of his graduate students 20 years ago. Skorucak now owns the online science equipment company xUmp, and he knew that sourcing so many items at the last minute would be tricky. 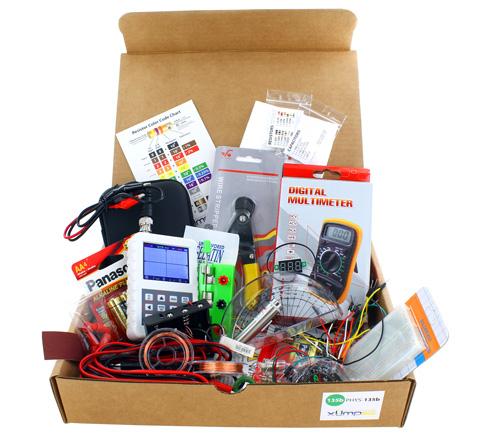 U.S. vendors keep a lean stock of scientific products on hand, so Feinberg would have to buy them in bulk from overseas. Cargo shipments usually take a month to arrive, but COVID-19 had scrambled the supply lines. The odds seemed stacked against them. But Skorucak jumped into action, calling in favors with his contacts.

“I got into this business really to spread the love of physics and science to younger people,” he says. “USC definitely has a special place in my heart. I wanted to give back a little bit, and I feel kinship with these students.”

With their order placed, Feinberg and Skorucak waited with fingers crossed. Would the container ship sail into the Port of Long Beach in time to mail the kits before lab sessions started in late August? After several tense weeks of worry about shipping delays and dockworkers going on strike, the duo exhaled. Their cargo arrived just in time for them to quickly assemble, pack and send the goodie bags to students.

“You’re not going to find a vendor who would do this normally,” Feinberg says. “For the spring semester, I mailed 11 kits and thought, wow, this is a lot of work. This fall semester, Anton shouldered a huge amount of the burden and the sheer labor involved in assembling and mailing a thousand kits.”

I try to teach them what it’s really like to be a physicist — not to do canned experiments but to do experiments that are open-ended and don’t have instructions. You have to figure it out yourself.

For Feinberg, seeing undergrads across the world enjoy the hands-on experiments makes the countless hours toiling in his home office and scrambling to put together the kits worth it.

“I try to teach them what it’s really like to be a physicist — not to do canned experiments but to do experiments that are open-ended and don’t have instructions,” he says. “You have to figure it out yourself. The students really grow into it. In the beginning, they’re flustered, but they eventually come around, and it’s very rewarding to see.”

An expert in optics and lasers, Feinberg has taught at USC since 1980. His talents in the lab are equaled by his challenging yet warm approach in the classroom. Thanks to high marks from students and his knack for instruction, the USC Dornsife College of Letters, Arts and Sciences recognized him with a teaching award. Colleagues describe him as dedicated, original and a little eccentric, in a good way.

“He also has a good way of interacting with students and colleagues,” says Stephan Haas, professor and chair of the Department of Physics and Astronomy. “He’s one of our most accomplished teachers. And he’s very witty — there’s always a little tongue-in-cheek in his writing.”

Haas says Feinberg is known for his dedication to his students. The professor had already accepted the task of revamping USC’s undergraduate physics labs before the pandemic hit, with the goal of completing the massive undertaking within a few years. Instead, he had mere months this summer to reshape hands-on experiments for five undergraduate courses taught by nine professors.

“It has been a pedagogical and logistic tour de force to come up with these kits and get them shipped out,” Haas says. “He more or less singlehandedly put this together.”

And even then, Feinberg knew his job was just beginning when the last box shipped.

Elizabeth Zhou’s physics kit arrived to her family’s home in Dallas too late for the first lab session, but Feinberg told the physics and computer science major not to fret. He promised that once the kit arrived, he’d schedule a time on the weekend to assist her by video as she worked through the hands-on experiments.

“That felt really generous,” Zhou says. “He was offering up three hours of his weekend time to help me out. That felt like a lot, and I thought it was really sweet.”

Feinberg also continues to adjust the lab experiments during the semester, staying a few weeks ahead of the students. He rewrote one project after discovering two objects already included in some kits — a tuning fork and a bendable and extendable plastic tube — could be used to demonstrate a sound phenomenon known as acoustic resonance.

Atef Sheekhoon ’20 took Feinberg’s advanced physics course last spring on his way to finishing his bachelor’s degree in physics. He appreciated how the professor could translate highly technical ideas in simple and clear terms.

“He’s a very intelligent person and explains physics concepts in a way I’ve never seen,” Sheekhoon says. “But I think the best thing I learned from him was to write down everything I do. Even now, talking about the experiments we did, I can go back to my notes because I wrote everything down.”

He’s All About the Students

Watching the lightbulb turn on for students like Zhou and Sheekhoon is rewarding, but Feinberg brushes off any praise. He says he’s driven by the same desire that inspires everyone when they get to do something they enjoy.

“You want to do a good job,” he says. “Once in a while, I’ll give a lecture that I think was sort of subpar, and I personally feel crappy about it for days afterward. I feel like I let the students down and I let myself down. So you do the best you can.”

Despite the many accolades he’s received and the many discoveries he’s made in the lab over 40 years at USC, Feinberg says he finds the most joy through his interactions with students. In his advanced lab course, he teaches about a dozen students each semester.

Most are college seniors and pretty serious about science. Many plan to pursue a doctorate in physics or a related field. So he doesn’t need to do much to get them excited or keep them engaged.

“The thing I like is you get to know them,” Feinberg says. “I see them really get into it, and it’s great to watch them, to help them, to kid around with them. Students at first are taken aback at somebody kidding around with them. They’re not used to that.

“For me, that’s the most fun, getting them to be at ease. They learn so much better when they aren’t afraid of you. I like that personal interaction the best.” No lab, no problem: Students tackle science experiments at home after special deliveries

USC mailed more than 1,000 lab kits to its college students around the world so they could still do hands-on experiments while studying remotely during the COVID-19 pandemic. 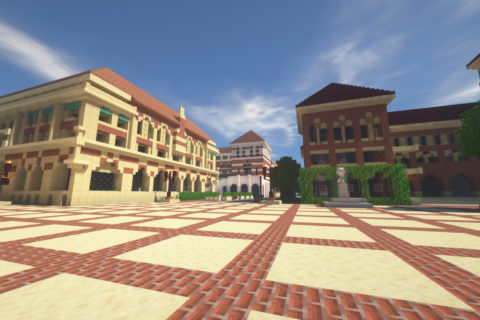 USC starts the 2020-21 school year with a renewed commitment to learning, student life and well-being as the world grapples with a pandemic.

When Physics Students Couldn’t Go to Class, This Professor Mailed Class to Them