The Roskis’ gift will support USC’s initiatives to preserve, restore and improve the sight of patients in Southern California and worldwide. By propelling discovery of new knowledge and furthering the education of tomorrow’s leaders in ophthalmology, the gift will enable the USC Roski Eye Institute to continue its powerful influence on vision care, research and education across the world. It also will advance Keck Medicine of USC’s position as a leader and innovator in the global human health revolution.

USC Trustee Ed Roski and his wife, Gayle, are major benefactors to USC’s art and design school, students and programs. This latest generous gift takes on special meaning because of the couple’s own experiences: Gayle Garner Roski, a plein-air watercolorist, received cataract treatment at the USC Roski Eye Institute. The procedure dramatically improved her ability to see color and light values. After the surgery, she realized how her vision, blurred and darkened by cataracts, had affected her paintings and changed how she used color. The Roskis now hope to help others suffering from vision loss or impairment.

The couple’s roots at USC run deep. They met their first year on campus as undergraduate students. Ten years ago, the USC Gayle Garner Roski School of Art and Design was named in recognition of the couple’s transformative gift. Their generous support helped the fine arts program embrace new media and digital arts, as well as provide for a graduate student art gallery. Other notable gifts to the university by the Roskis have supported athletics and the USC Marshall School of Business. With this most recent gift, the Roskis reaffirm their long-standing support, while bringing a unique perspective — that of the visual artist — to the study and treatment of eye disease.

With this most recent gift, the Roskis build beautifully on their already impressive legacy.

“Gayle and Ed Roski stand among USC’s most treasured friends,” said USC President C. L. Max Nikias. “Generations from now, our community will continue to learn about this extraordinary couple and their enduring contributions to our university. With this most recent gift, the Roskis build beautifully on their already impressive legacy, while widening the scope of their remarkable philanthropy.”

Led by Rohit Varma, professor and chair of the department of ophthalmology and interim dean of the Keck School of Medicine of USC, the USC Roski Eye Institute traces its roots to the founding of USC’s ophthalmology department in 1974. Its 60 faculty members have received international acclaim for their contributions to vision research, including the world’s most widely used glaucoma implant and the development of optical coherence tomography, a non-invasive imaging technique used to diagnose glaucoma, macular degeneration and other conditions. 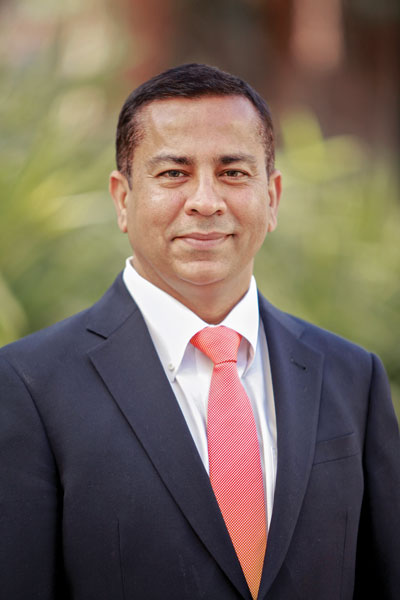 Varma, who also holds the Grace and Emery Beardsley Chair in Ophthalmology and is president of USC Care Medical Group, is a recognized expert in glaucoma and has led the nation’s most influential studies on eye health in minority and vulnerable communities for the past 20 years.

Among the USC Roski Eye Institute’s many achievements, institute co-director Mark Humayun led a team of pioneering researchers to invent and implant the first successful retinal prosthesis in a human patient, bringing sight to people with certain types of blindness. The Argus II Retinal Prosthesis aims to restore vision to those who lost their sight to retinitis pigmentosa. In 2016, President Barack Obama recognized Humayun’s work with the National Medal of Technology and Innovation.

“Gayle and Ed Roski’s gift is an incredible vote of confidence in the work we do at the USC Roski Eye Institute. Their support of USC has been unwavering over the decades, and I am humbled that they have chosen to invest in our faculty and our work,” Varma said. “This gift will enable us to advance eye research in fields such as ocular imaging, drug delivery, dry eye, stem cell therapies and public health and policy.

“These funds will also establish a surgical training laboratory for teaching the most advanced surgical skills to the next generation of eye surgeons,” he added. “With this gift, we will continue to make progress toward our most ambitious goal — eliminating blindness.”

Ed Roski said he and his wife are honored to help the institute grow and expand.

The USC Roski Eye Institute is ranked in the top 10 for research funding by the National Eye Institute, a part of the prestigious National Institutes for Health.

It has ranked among the nation’s top ophthalmology programs in national hospital rankings for more than 20 years.

Its Pediatric Ophthalmology Service is the only program in the nation with expertise in virtually every pediatric ophthalmologic subspecialty.

USC Department of Ophthalmology faculty has been awarded more than 60 patents for innovations in eye care and vision research.

The institute was the first West Coast provider of the Prosthetic Replacement of the Ocular Surface Ecosystem — a scleral device for treating irregular astigmatism and dry eye.

“Sight is so profoundly important, and we feel fortunate to be in a place where we can help bring the institute to the next level,” he said.

President and chairman of the board of Majestic Realty Co., Ed Roski also is co-owner of the Los Angeles Kings and Los Angeles Lakers. Combining his love of sports with his passion for business, he is recognized for playing a critical role in developing Staples Center, a landmark in downtown Los Angeles.

A generous and humble philanthropist, he commits his time and resources to countless civic organizations throughout Los Angeles and has served as a member of the USC Board of Trustees since 2002, having previously served as chairman.

Gayle Roski is a native of Los Angeles who studied fine arts at USC. Her watercolor paintings have been exhibited extensively in museums and galleries from Southern California to Scotland. She is chair of the art committee at the Cathedral of Our Lady of the Angels and serves on the executive boards of the California Art Club and the USC Roski School of Art and Design.

“As an artist, the most important thing to me is my eyesight,” Gayle Roski said. “Imagine having a yellow lens due to cataracts over your eyes all the time, and then having it removed. The improvement was amazing, and our hope is that this gift helps other people improve their vision.”

The Roskis’ gift is a major step forward in USC’s $6 billion Campaign for the University of Southern California, one of the most ambitious fundraising campaigns in the history of higher education. The campaign has already raised more than $5 billion to advance USC’s academic priorities and expand its positive impact on the community and the world.

About the USC Roski Eye Institute

The mission of the USC Gayle and Edward Roski Eye Institute is to protect, preserve and restore sight. It is recognized as an international leader in studying the epidemiology of eye disease among diverse populations. Its faculty diagnoses, treats and manages the most complex eye conditions, from in utero to advanced age. The institute’s physician-scientists integrate and apply emerging technologies to develop new methods to restore sight to the blind.

Training the next generation of leaders in ophthalmology, the USC Roski Eye Institute’s highly esteemed residency program drew more than 400 applications for six spots in 2015. Directed by Vivek R. Patel, associate professor of clinical ophthalmology and director of neuro-ophthalmology services, the program is widely recognized as among the finest ophthalmologic training programs in the country.

The USC Roski Eye Institute’s patient-centered care brings together physicians, researchers and educators in every ophthalmic specialty and subspecialty.

“Eye Care for All” was designed to introduce USC undergraduate students from underrepresented groups to careers in eye care.

How a routine eye exam saved a patient’s life

Anne Crile noticed changes in her vision, but she never imagined those symptoms would lead to the diagnosis of a life-threatening brain tumor.

Not a dry eye in the house: Treating a common, potentially dangerous eye ailment

Some 17 million adults in the U.S. have dry eye disease. Meet the physicians and researchers at the USC Roski Eye Institute’s Dry Eye Center who are fighting it.