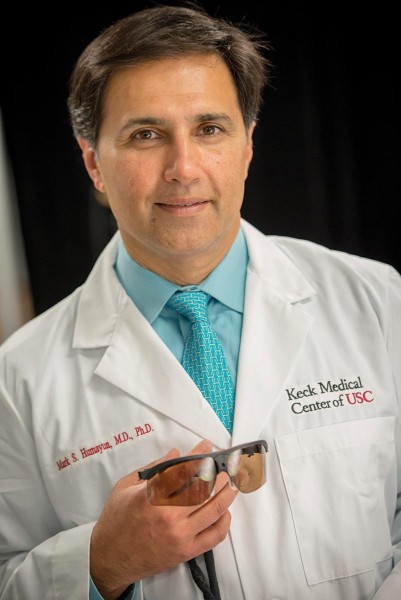 Mark Humayun will receive the National Medal of Technology and Innovation. (Photo/Chris Shinn)

President Barack Obama will bestow the National Medal of Technology and Innovation to USC University Professor Mark Humayun at a ceremony in Washington, D.C., early next year.

Humayun, who holds joint appointments at the Keck School of Medicine of USC and the USC Viterbi School of Engineering, is a University Professor, the inaugural Cornelius Pings Professor of Biomedical Sciences and professor of ophthalmology, biomedical engineering, and cell and neurobiology at USC.

He earned worldwide acclaim through his development of a retinal prosthesis system that helps individuals with a certain type of blindness to see. A recent iteration of that system, the Argus II, became the first retinal implant to receive FDA approval two years ago.

“Mark Humayun is such a deserving recipient of this prestigious honor,” said USC President C. L. Max Nikias. “He dreamed the impossible: to help the blind see. With fearless imagination, bold leadership and biomedical expertise, he and his team made that dream come true with the world’s first artificial retina. USC is tremendously proud to be Professor Humayun’s academic home.”

“The level of recognition is very exciting and very much a surprise,” Humayun said. “I’m honored to be the recipient of this award.”

The Argus II system restores some visual capabilities for patients whose blindness is caused by retinitis pigmentosa. RP is an inherited retinal degenerative disease that affects about 100,000 people nationwide.

Science and technology are fundamental to solving some of our nation’s biggest challenges.

“Science and technology are fundamental to solving some of our nation’s biggest challenges,” Obama said in a White House news release announcing the National Medal of Technology and Innovation honorees. “The knowledge produced by these Americans today will carry our country’s legacy of innovation forward and continue to help countless others around the world. Their work is a testament to American ingenuity.”

Humayun joined USC in 2001 after receiving his bachelor’s degree from Georgetown University, MD and residency in ophthalmology at Duke University Medical School, PhD in biomedical engineering at the University of North Carolina and advanced fellowship training in retinal surgery from Johns Hopkins School of Medicine. In 2013, Humayun was named the inaugural director of the USC Roski Eye Institute and interim chair of the USC Department of Ophthalmology.

R&D Magazine named Humayun “Innovator of the Year” in 2005 for his work on the Argus II.

The Argus II is manufactured by Sylmar-based Second Sight. It was first approved for use in Europe in 2011 and has been implanted in dozens of patients in clinical trials – often by Humayun himself.

The system uses a camera mounted on special glasses that sends a signal to an electronic receiver with 60 electrodes that is implanted inside the eye. The receiver sends signals to the retina that travel through the optic nerve to the brain, where they can be interpreted as a visual picture.

Humayun has said that he hopes one day the device can be improved to also help individuals with age-related macular degeneration, a similar but far more common disease.

“These sort of things can only be accomplished if others join in and help you, and I’ve been very fortunate to have strong collaborators,” he said.

Humayun, who flew to the East Coast yesterday for the holidays, got the news when he arrived.

“It was a complete surprise. I’m still not sure who nominated me,” he said. It does, however, explain the call he received six weeks ago from the FBI, wanting to conduct a background check.

“I thought it was a hoax at first,” he said. Even after he answered their questions, the federal officials declined to reveal the purpose of the check – but left Humayun with the suspicion that he’d be meeting someone very important.

Which, in about a month, he definitely will.

The National Medal of Technology and Innovation was created in 1980 and is administered for the White House by the U.S. Department of Commerce’s Patent and Trademark Office.

“The award recognizes those who have made lasting contributions to America’s competitiveness and quality of life and helped strengthen the nation’s technological workforce,” according to a White House statement. An independent committee representing the private and public sectors submits recommendations to the president.

Humayun and his colleagues’ efforts to improve the lives of RP patients is an example of USC’s commitment to tackling what Provost Michael Quick describes as “wicked problems” – difficult and multifaceted issues that require collaboration across several disciplines.

USC’s breadth of research and programmatic areas collectively create a strong community to make influential contributions to address these problems – creating both an opportunity and an obligation for the university.

This article was updated April 5, 2016, to reflect the renaming of the USC Roski Eye Institute.

Patient can see for the first time in three decades

Arizona resident has positive results from use of Argus II just one week after retinal implant.

The U.S. Food and Drug Administration has approved the Argus II retinal prosthesis system for use in the United States.

Keck Medicine of USC research to slow vision loss for macular degeneration patients has been funded as part of the third round of the California Institute for Regenerative Medicine’s Disease Team awards.

Mark Humayun has been named the inaugural director of the USC Eye Institute and interim chair of the USC Department of Ophthalmology.