Every year as the fall semester begins and a sea of students fill areas like McCarthy Quad, a feeling of renewal surrounds the University Park campus—and it’s especially noticeable this year.

Roughly 18 months after COVID-19 forced classes online, students are getting their traditional college experience again — and some for the first time. Part of that experience are the countless USC traditions — from “All Hail” and “Fight On” to Tommy Trojan, Traveler and kicking the flagpole base while walking to the Los Angeles Memorial Coliseum on game day.

Whether students are refreshing their memories or getting their first taste of life at USC, these traditions play an especially vital role as the Trojan Family – along with the rest of the world – tries to return to normalcy.

“We’re in a much better place than we were last year,” said Jack Stolrow, president of Trojan Knights. “It’s just a totally different environment.”

Coming into USC as a transfer student, the first thing Stolrow did was join Trojan Knights. The 100-year-old organization is known for guarding some of the university’s most cherished traditions: protecting the Victory Bell and leading the student section to painting bodies at sporting events and guarding Tommy Trojan during Troy Week. Trojan Knights embody what it means to have school spirit.

“It’s these traditions that separate and define USC as an institution,” Stolrow said. “They’re a connection to the past, and I think it’s important that those are guarded and kept by the students and by this organization.”

Stolrow pointed out that as excited as he is to continue the long-held traditions of Trojan Knights, he also sees this semester as an opportunity to bring in some new ones. Though they’re known for their involvement at football games, Stolrow wants the Trojan Knights to get to more sporting events like basketball, baseball, soccer, track and volleyball. 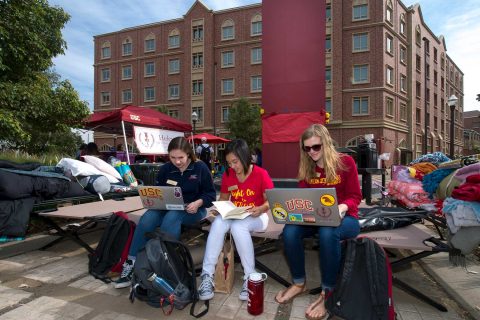 Another iconic group that’s part of the “spirit experience” on campus, USC Helenes is also celebrating its 100th year on campus. From “Hecuba watch” in advance of the USC-UCLA football game to being on the field with “Traveler Crew” in the Coliseum and painting faces at basketball games, the official hostesses of the university are looking to continue old traditions and create new ones.

“A good chunk of our membership hasn’t had a full calendar year where they really know what it’s like to be a Helene,” said the group’s president, Kathryn Dullerud. “We love getting to spread our tradition and showing new members what it’s like to be in a football game … so it’s really exciting to get to teach even more people about USC traditions than normal.”

Like the Trojan Knights, Dullerud said the Helenes are planning on having a stronger presence at other sports this year. She also wants to bring back coordinated spirit displays at games like card stunts.

“We haven’t done them in so long and they used to be a really iconic part of USC,” Dullerud said.

USC traditions on the march — literally

Among the most spirited at USC, there appears to be a running theme — excitement for that first game back in the Coliseum. This especially holds true for the Trojan Marching Band, which is entering a new era under first-year director Jake Vogel. 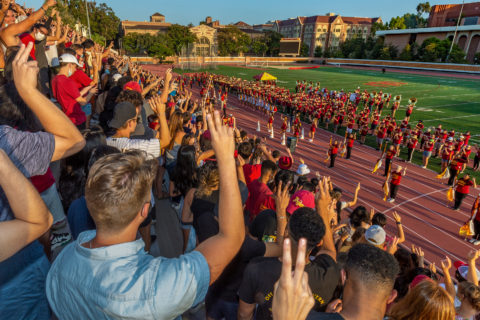 The newest Trojans show their spirit as the Trojan Marching Band and Song Girls perform at the Aug. 20 spirit rally. (USC Photo/Gus Ruelas)

The Spirit of Troy will also have another first as it heads into the fall semester: Niven Jayanthi is the first band member to serve as both drum major and general manager in the same year. This dual role allows Jayanthi to be a leader on the field, adorning his suit of armor and sword, as well as off the field.

“I’m in a leadership position where I can create a lot of change and make lasting impression on the new people who are coming into USC,” Jayanthi said. “I think that’s what a lot of people strive for in whatever it is they’re passionate about.”

As a senior, Jayanthi had a traditional college experience his freshman and most of his sophomore year, so he knows the importance of “firsts.” Though it would be understandable to want to enjoy one’s last year on campus, Jayanthi seems more concerned with passing down the traditions of the Trojan Marching Band to the two classes getting their taste the Spirit of Troy for the first time.

“What I really get excited about is that is that leadership aspect, this idea of leaving something behind,” he said. “There’s an element that I think is also a bit bittersweet.

“Being away from campus for 18 months, coming back I definitely wish I could stay another year, but I think I think the general mood right now is that we have to make up for lost time.”

And when it comes to the first time Jayanthi will walk into the Coliseum as drum major of the Trojan Marching Band?

“We’re the Spirit of Troy,” he said. “I think that’s probably the No. 1 thing I feel when I walk out of that tunnel: spirit.”

Alcohol sales return to the Coliseum, while on-campus tailgating is prohibited.

Trojan traditions serve as a fitting return to normalcy