They had been standing guard since the weekend protecting Hecuba, queen of Troy, 24 hours a day at USC Village in the run-up to Saturday’s game against the Trojans’ crosstown rival. 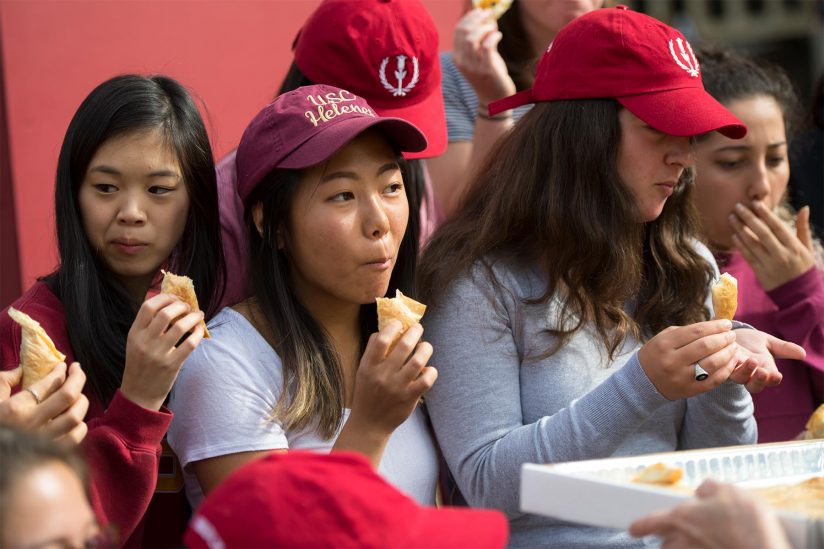 On Thursday morning, members of the USC Helenes — the university’s oldest all-female service organization — were rewarded for their efforts with a visit from Niki C. Nikias, wife of USC President C. L. Max Nikias. She greeted them with Greek pastries, baklava and tiropita.

“I think it really reminds me of the fact that we’re part of something bigger,” Helene member Claire Justin, a senior, said of Nikias’ visit.

While the Trojan Knights have long protected Tommy Trojan from any potential Bruin incursion, this week marked the start of a new, female-led tradition at USC. From now on, when Tommy is protected by the Knights, across campus the all-female service organization will camp out around Hecuba. The statue of the queen of Troy became an immediate icon when it was unveiled in August during the official opening of USC Village.

“It’s exciting to be a part of something new. I hope it lasts for a long time,” said Helene member Alex Huerta, a senior. “Now it’s a new tradition that’s ingrained in the school’s spirit and culture.”

A dessert made of phyllo pastry filled with chopped nuts and soaked in honey.

A Greek layered pastry made with layers of buttered phyllo and filled with a cheese-egg mixture.

Guarding statues is a long-standing USC tradition. Baklava is a bit newer, an annual Conquest Week tradition started by Nikias since her husband became USC’s 11th president in 2005.

The statue patrols stem from the decades-long pranks between UCLA and USC, which included UCLA fans getting a helicopter and dumping manure on USC’s University Park Campus and Trojans planting 20,000 cardinal and gold crickets in UCLA’s library.

In recent years, the focus has been on the schools’ iconic statues. The bruin has been sprayed with red paint. Tommy once lost his sword.

Marice Salib, a senior Helene, said it makes sense that the group would be chosen as Hecuba’s protectors.

“Hecuba was the one who encouraged people to fight on and not lose hope. The Helenes do that,” she said.

The Helenes, established in 1921, will tell you they’re just as much a spirit organization as a service organization. Philanthropy and sisterhood are two core components of the organization, but so is showing support for the university — sitting next to the Knights at football games to cheer on players or filling the bleachers at women’s sporting events. 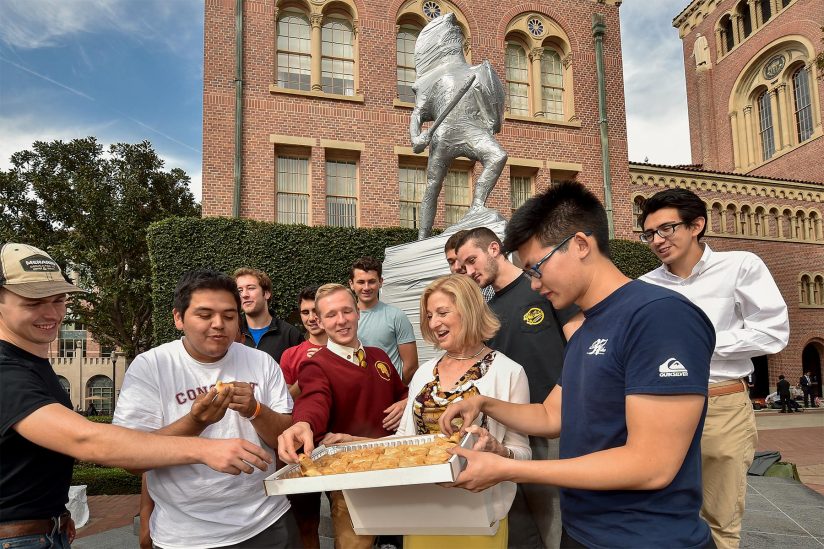 “That’s part of who we are,” said Huerta, who said it’s been nice to share that side of the organization with passing students. “We were just talking last night that semester’s recruitment will probably go up a lot, which is really exciting.”

Cots were lined up to the side of Hecuba, with Helenes taking shifts sleeping throughout the night. They were encouraged to pick two days, but many were there nearly every day.

During the daytime, as many as a dozen Helenes would be there — talking, doing their homework, playing games, but always keeping watch.

It takes a village

Restaurants and shops at the village showed their support. Starbucks brought by coffee and bagels in the morning and Trader Joe’s would bring by bags filled to the brim with snacks, even inquiring what were favorites of the Helenes. The Baked Bear, Greenleaf Gourmet Chopshop and the dining hall brought by cookies and food.

On Friday, at least a handful of alumni are planning to come out and join them in their last night with the queen of Troy.

“It’s an exciting new tradition that we’re starting,” sophomore Helene member Jenna Giulioni said, “and hopefully we can come back in 50 years and see girls still doing it.”

Watch highlights from Thursday’s Conquest rally and learn more about the Helenes in this video:

Victory Bell back in Trojan colors

After Saturday’s big win over UCLA, watch as the Trojan Knights strip away three years of Bruin blue.