At the eighth annual USC Latinx Student Empowerment Conference — held Saturday in Fertitta Hall at the USC Marshall School of Business — more than 100 current students and alumni came together to discuss creating and opening spaces that allow Latinx students at USC to grow their network and exchange knowledge.

“It’s important for us to create spaces at USC to foster academic success, as well as social justice activism and empowerment, thus affirming our students sense of belonging while also supporting their personal growth and critical thinking skills,” said Billy Vela, director of La CASA and the conference organizer.

The daylong program was opened by Laura Farber, the first Latina president of the Tournament of Roses Association. She talked about her role as president and her motivations to plan Rose Bowl parades that are reflective of the diverse communities that continue to support the tradition.

Her message for the participants of the conference was to build support systems to propel their dreams. “Find your allies in life. It doesn’t always have to be your voice that advocates,” she advised. “Find who will advocate for you, and most importantly, be authentic. Don’t let anyone else make those decisions or create those barriers for you, because you can do whatever you set your mind to.” 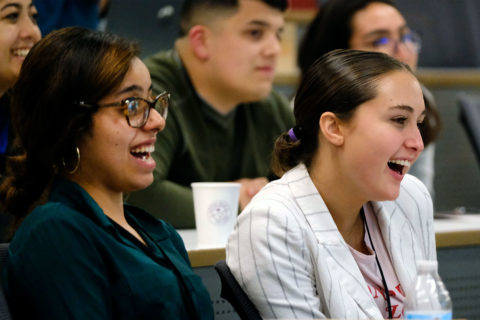 USC President Carol L. Folt delivered the second keynote. In her first year as USC’s president, Folt has worked to ensure diverse student voices are heard and to increase equity and opportunity for all students. She informed the audience of several forthcoming new initiatives that will focus on providing support for first-generation and Latinx students at USC.

“What we have every day is the opportunity to create the place where hope lives, where hope can thrive. Where we can build that sense of belonging and purpose,” she said. “That is the legacy and the opportunity of being at this university, being with all of you and celebrating what is to come.”

The keynote addresses were punctuated by workshops on topics that were facilitated by current students, alumni and associates of USC. A workshop on resilience, wellness and friendship was facilitated by USC graduate student Xavier Hernandez, who reflected on his growth as an individual since his time as an undergraduate student at USC, when he struggled with impostor syndrome. Hernandez is currently pursuing his MS in integrated design, business, and technology at the USC Jimmy Iovine and Andre Young Academy and attributes his achievements in life to a resilience learned from the sacrifices of his parents.

During the closing keynote address, USC Trustee Michael Felix shared his experience being a first-generation college student at USC in the 1980s. As an undergraduate four decades ago, Felix said he battled culture shock due to the lack of diversity at USC at the time.

However, Felix said he came to a realization: “Despite the greater financial and educational opportunities that my classmates may have had, they were not necessarily smarter than me. Especially if I put in the work, and I was willing to put in the work.”

Felix urged students to take advantage of the network and education that USC provides. “USC gave me the experience, the tools and the education — and also the self-confidence — to realize that I could compete in a world where I was a racial minority,” he said.

He added that he has “never been more excited about the university [than he is today], particularly the diversity and inclusion efforts, as well as the culture of transformation that Dr. Folt is leading.”

Itza Arciga, a first-generation graduate student at USC, said the conference gave her a sense of empowerment and community.

“What an amazing opportunity to take advantage of and meet other people that look like me, and have the same goals,” she said. “We all have the same motivation to not only embrace ourselves but to help others embrace themselves.”

Civic engagement is one of the three keys, mayor’s chief of staff says.

After earning her degree later this year, Mexico’s Karla Martinez hopes to motivate others to see their potential.

For Long Beach mayor (and USC alum), being an immigrant shapes the future

For the first time, a series of colorful banners recognizing the university’s Latino community were raised on Trousdale Parkway.