About 350 faculty, staff, alumni and friends of the university celebrated the school’s second-ranking administrator, Charles Zukoski, as he was formally installed Wednesday as USC’s provost and senior vice president of academic affairs.

Zukoski had previously served as provost and executive vice president for academic affairs at the University at Buffalo from 2012 to 2019. 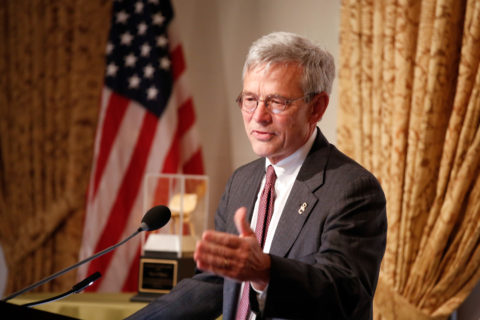 Zukoski shared his vision for USC, a “leading edge” university that is “poised for change.” (USC Photo/Steve Cohn)

“I recognize that USC is poised for change,” Zukoski told the audience at Town and Gown on the University Park Campus. “Among the reasons is a thirst of faculty, students and staff to face the issues of the past few years, learn what went wrong, develop strategies to avoid repeating them, and move forward united to address the opportunities of our age with intention, creativity and energy.”

Then he laid out his vision for USC, which he praised as a leading research university — one that can become “the place where one must go to be educated or one is simply not at the leading edge.”

Zukoski set forth his goals as provost:

“I feel the wonderful opportunities of our times and believe USC is the place where the future will be developed,” he said. “I am excited to be here and proud to be your provost.”

Zukoski holds the Shelly and Ofer Nemirovsky Provost’s Chair and oversees the USC Dornsife College of Letters, Arts and Sciences, the Keck School of Medicine of USC and the university’s 21 professional schools and academic units, in addition to USC’s museums and the divisions of Student Affairs, Libraries, Research, Student Religious Life and Enrollment Services.

USC President Carol L. Folt introduced Zukoski by saying she knew that he was best qualified to oversee the intellectual vitality of the university — and that the president is only as good as her provost. She noted that Zukoski received the highest honors in his field, having been named as one of the 100 Chemical Engineers of the Modern Era by the American Institute of Chemical Engineers.

Academic achievements aside, Folt pointed out that Zukoski embodies an essential quality to fulfilling the role as provost: being unfailingly student-centered.

Zukoski earned his bachelor’s degree from Reed College in Portland, Ore., and his PhD in chemical engineering from Princeton University. He replaces Michael Quick, who served as provost from April 2015 to June 2019.

University leaders recognize the aerospace and systems engineer for guiding USC through a tumultuous year and create an endowed scholarship in her honor.