When competitors line up for the American Brain Tumor Association 5K Run/Walk on the University Park Campus this weekend, they’ll know it’s for a good cause. But most will have no idea about the enthusiastic scientist who helped bring the event to USC.

Josh Neman acknowledges he doesn’t look like the stereotypical runner. He’s not. He is just committed to fighting brain tumors and helping patients in any way he can. Sometimes that means tying on running shoes, and sometimes it means studying cancer cells.

On occasion, it just means listening to cancer patients tell their stories. 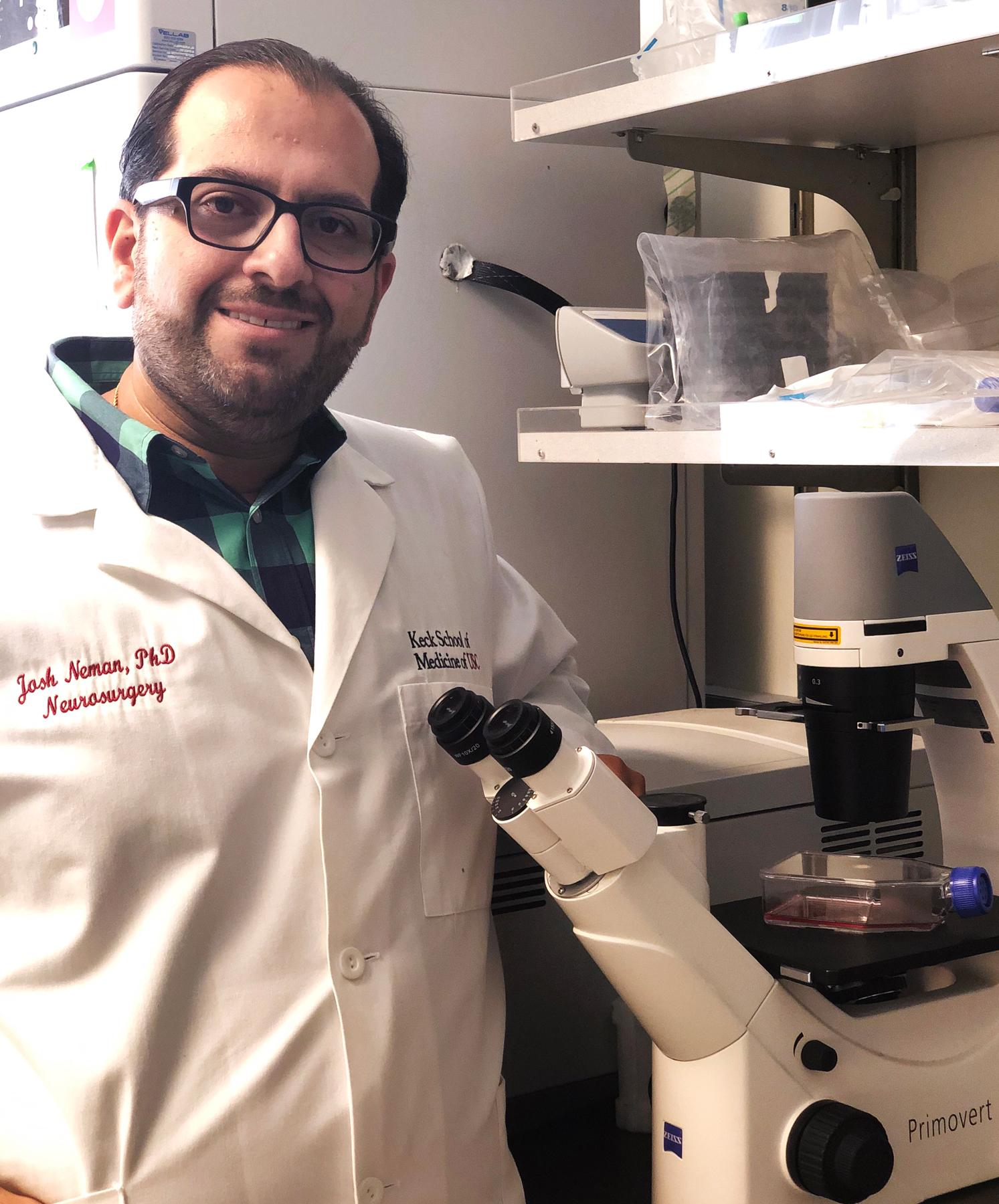 When Josh Neman isn’t working in his USC lab, he meets with community advocates and raises funds for cancer research. (Photo/Krutika Deshpande)

Neman is an assistant professor of neurological surgery, physiology and neuroscience at the Keck School of Medicine of USC. Don’t assume he is a surgeon, though: He holds a doctorate, and his home turf is a science lab, not an operating room. But he works with brain surgeons almost every day at the Keck School of Medicine to solve the mysteries of how healthy nerve cells and invading cancer cells in the brain talk to each other.

When surgeons remove a tumor from a patient’s brain, they hand part of it over to Neman, a member of the USC Norris Comprehensive Cancer Center. His lab then cultivates, grows and studies its cells, trying to understand what makes them special. Ultimately, he wants to use that information against cancer.

“Here, look at these,” he says, pulling a clear, round plastic dish from inside a steel, box-like incubator in his lab. The dish swishes with liquid as he puts it under a microscope. Hundreds of metastatic breast cancer cells fill the fluid. It’s only been a few days since they started growing in the dish from a sample brought from a patient who had breast cancer cells growing in her brain. But already the cells show their knack for survival, he says. What makes these metastatic cells so vital, while others barely grow? He rattles off a list of the experiments that many students and fellows in his lab are conducting to find out.

Not just a lab scientist but a scientist-advocate

So what does a scientist who studies brain tumors have to do with a fundraising race? When you meet the effusive Neman, you understand. He operates beyond the traditional bounds of a lab scientist. In a way, he’s a scientist-advocate.

Neman grew up in Los Angeles’ San Fernando Valley, knowing he wanted to get into medicine. As a student at UCLA, he searched for a university lab where he could learn about the brain. UCLA’s labs were full, so he drove to USC’s Health Sciences Campus, where opportunities seemed abundant. He cold-called Keck School of Medicine’s Martin Weiss, not knowing Weiss was a renowned neurosurgeon, to plead to join a USC lab. Weiss steered the naïve but resourceful student into USC scientist Berislav Zlokovic’s group, helping propel the undergrad toward his doctorate in neuroscience.

Years after the transformative experience, Neman returned to USC and brought his people-friendly, citizen-science approach with him. He focuses on pediatric brain tumors and metastatic tumors in the brain caused by breast cancer and other cancers. He often finds inspiration for research in papers, at conferences or through the observations of physicians and his fellows. But sometimes he unearths ideas for research in unusual places.

For example, he read comments from breast cancer patients on social media who complained of feeling foggy headed even years after completing their chemotherapy. Could it be that chemotherapy affects the brain — and if so, could it harm the blood-brain barrier that protects the brain? That spawned research by one of his research fellows that suggests that chemotherapy may cause lasting damage to that blood-brain barrier, potentially allowing metastatic cancer cells to enter brain tissue — which is now a funded project from National Institutes of Health.

At the same time, he brings cancer patients into his lab and listens to them, gathering suggestions. These patients are trained as advocates and review grants for the Susan G. Komen organization and Department of Defense’s breast cancer research program, which has supported Neman’s research.

How this neuroscientist brought a brain tumor 5K to USC

In 2016, the American Brain Tumor Association (ABTA) awarded Neman a grant to fund research into medulloblastoma, a tumor that primarily strikes children. He immediately joined the ABTA’s network of scientists, attending their annual conferences. The ABTA also supported a medical student who joined his USC lab to work on brain tumors. She is now a Keck Medicine neurosurgeon. 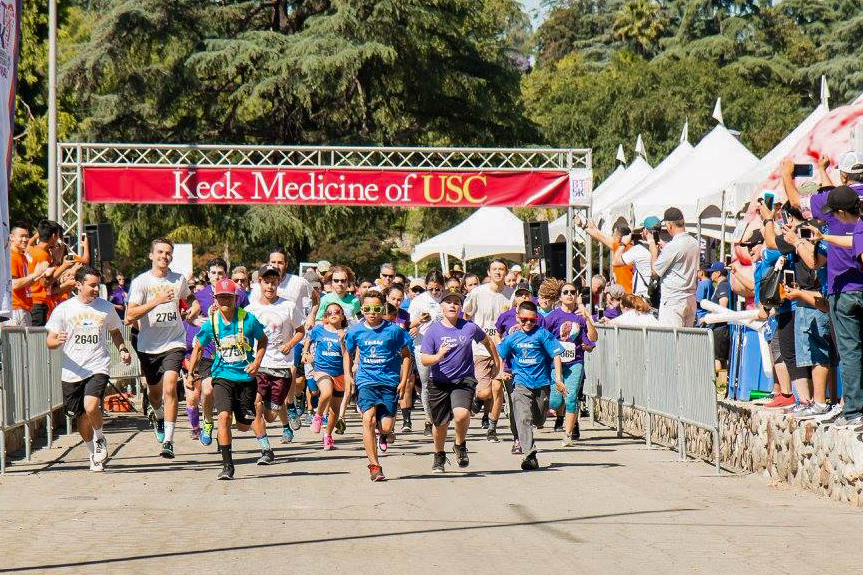 Away from the lab, he attended the group’s Los Angeles 5K at the Fairplex in Pomona in 2017. Always looking for opportunities, he wondered if moving the event farther west to a central Los Angeles County location could encourage more participants. “Have you thought about bringing it to Los Angeles?” he asked the organizers.

By 2018, the event was held at the USC University Park Campus, complete with an appearance from members of the Trojan Marching Band. One of nine fundraising races for ABTA across the country, it is the only one held on a university campus.

USC’s involvement has garnered the appreciation of ABTA and its CEO, Ralph DeVitto. “Josh not only is the reason we’re at USC, but he also is heading up his own fundraising team,” DeVitto said.

“To have a researcher with that passion is so important. The work he’s doing is so challenging, and he’s someone we see as a true ambassador and a true leader.”

For information about the event, visit the ABTA’s 5K page. Registration is available on the morning of the event.

Research reveals why breast cancer spreads to the brain

USC researchers have determined how cancer cells target certain organs, which could help develop treatments to slow or stop the disease from spreading.

Anat Erdreich-Epstein, associate professor of pediatrics and pathology at the Keck School of Medicine of USC, was awarded a two-year exploratory grant from the National Institute of Neurological Disorders and Stroke to study a newly discovered gene that slows the growth of malignant brain tumors.

Keck School of Medicine of USC surgeon and radiologist team up to test a new ultrahigh field imaging technology.