Berislav Zlokovic, a pioneer of the theory that fixing the brain’s leaky blood vessels will prevent Alzheimer’s disease, has received four grants totaling up to $24.9 million over five years.

The funding allows Zlokovic, director of the Zilkha Neurogenetic Institute, to attack from different fronts the blood-brain barrier, a gatekeeper that prevents toxic substances from entering the brain.

“The brain contains 400 miles of blood vessels that can stretch from Los Angeles to San Francisco,” said Zlokovic, chair and professor of the physiology and biophysics department at the Keck School of Medicine of USC. “If there is a leak along this vascular tube and the pothole is, for example, near the hippocampus — the center of learning and memory — that can contribute to the development of dementia and Alzheimer’s disease. We can delay the onset or slow the progression of Alzheimer’s if we are able to fix leaky capillaries when they first start, some 10 to 15 years before Alzheimer’s symptoms even surface.” 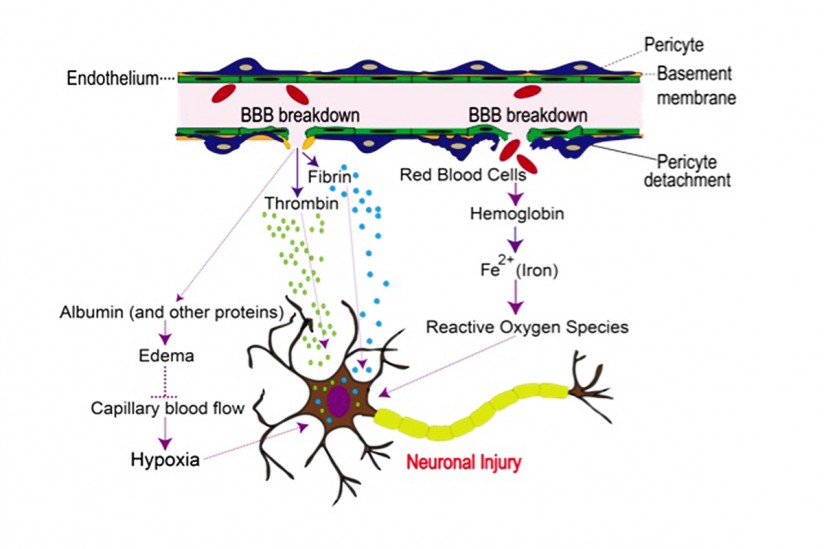 When the blood-brain barrier breaks down, the leak along this vascular tube allows many blood-derived toxic products, cells and pathogens to enter the brain and damage circuits involved in memory and learning. (Graphic/The Zlokovic Lab)

“Berislav Zlokovic is a very creative scientist who forges partnerships across disciplines, paving the way for innovation in varied areas ranging from basic Alzheimer’s research to clinical trials,” said Rohit Varma, interim dean of the Keck School of Medicine. “He is an internationally renowned clinician-scientist recognized for his contributions to age-related changes and diseases of the brain. Dr. Zlokovic’s work has the potential to help millions of people who have or may develop Alzheimer’s disease.”

More than 5 million Americans currently live with Alzheimer’s, a disease that kills more people than breast and prostate cancer combined, according to the Alzheimer’s Association. Alzheimer’s is the sixth leading cause of death in the United States.

USC researchers in multiple disciplines are seeking to untangle intractable diseases and conditions attached to aging, including Alzheimer’s and dementia.

Many Alzheimer’s disease researchers focus on the tangles of tau proteins in the brain or beta-amyloid plaque that may block cell-to-cell signaling at synapses. Zlokovic, however, believes vascular dysfunction predates and contributes to these manifestations.

“The blood-brain barrier’s leaks allow many blood-derived toxic products, cells and pathogens to enter the brain and directly damage brain circuits involved in memory and learning,” Zlokovic said. “Additionally, bad proteins that normally are ejected from the brain, such as beta-amyloid, have to struggle against the flow of traffic. This situation can eventually lead to ‘a second hit’: Beta-amyloids and tau tangles remain in the brain and cause damage that become evident years later.”

They will also test whether 3K3A-APC, a neuroprotective enzyme developed by Zlokovic’s team that is in Phase II clinical trials among stroke patients, can stabilize the vascular system in rats with Alzheimer’s. That would theoretically delay disease onset and slow the development of amyloid and tau pathology.

This multi-institutional study will also include the Huntington Medical Research Institutes, Washington University in St. Louis, the Banner Alzheimer’s Institute and Mayo Clinic.

“We are confident that the proposed studies will have a significant impact on our understanding of the development of pathology, treatment and early prevention of dementia and Alzheimer’s disease,” Zlokovic said.

His team will examine how pericyte loss in a mouse model leads to blood-brain barrier breakdown, cerebral blood flow reductions, damage to the brain’s circuitry and neuron loss. They hope to establish perictye as a new key target for white matter disease, the age-related wearing away of tissue in the largest and deepest part of the brain.

The program has two design paths. Under preclinical objectives, researchers will use multiple imaging techniques in different live rodent models experiencing small vessel disease. Under clinical objectives, they will study patients who have stroke or cognitive displays of small vessel disease. They will also use advanced MRI methods to examine patients with sleep apnea who have low-oxygen levels in the brain and disturbed sleep.

The research will determine the structure of the perivascular space, how cerebral brain fluid reacts to changes in brain equilibrium and blood-brain barrier leakage. The ultimate goal is to identify therapeutic targets for the treatment of small vessel disease of the brain, which may contribute to cognitive impairment.

The National Institute on Aging awarded Keck School of Medicine of USC researchers $3.7 million to explore the link between diabetes and brain health in the understudied group.

A mutation in a microprotein is connected to a significant increase in the risk for Alzheimer’s and highlights a possible target for treatment, a USC Leonard Davis School of Gerontology study finds.

What older adults do while they sit affects dementia risk, study indicates

Researchers at USC explored the link between sedentary behavior and risk of dementia, find that type of activity matters when it comes to brain aging.