Without skateboarding, Eric Diaz’s life might have taken a much different path.

The East L.A. native probably wouldn’t be two years away from earning his civil engineering degree. He guesses at a much darker outcome: crime, prison, maybe even an untimely death.

“I had a friend, may he rest in peace, who didn’t make it to 17,” Diaz said. “I saw myself going that way, and I knew I’d probably end up dead like some of my other friends or in prison.” 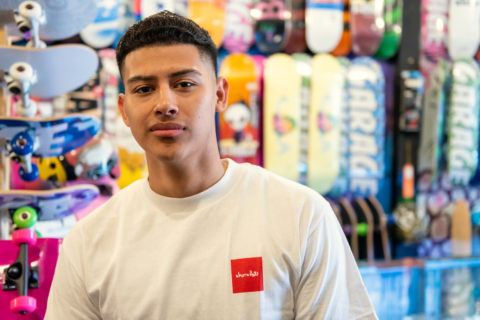 He feels incredibly fortunate that a few skateboarding ramps caught his eye one day as he rolled along Atlantic Boulevard not far from his home. The young teen had stumbled on The Garage Board Shop, a neighborhood hangout for skaters and other kids from the community. If they did a few hours of homework at the shop, the store’s founders let the kids practice their kick flips and axle stalls in the shop’s makeshift skate park.

The more time Diaz spent there, the more he could picture a brighter future for himself. Looking back now at age 20, he can see how skateboarding not only created a safe space for him to relax and burn off stress but also taught him skills like determination and focus that helped him succeed.

“I’ve always seen it as therapy, and most other kids do, too,” he said. “It helps you find yourself — who you are and what you want to do.”

That insight is like gold to researchers at USC who have been exploring skateboarding culture and how skaters view their place in society. Led by Zoë B. Corwin, a research associate professor at the USC Rossier School of Education, the team has been crisscrossing the United States to interview skateboarders in diverse communities, seeking to understand their experiences and the support they need to thrive.

“Skateboarders have this tenacity to practice a trick thousands of times, they are creative, they have cross-cultural interactions not common in other spaces,” Corwin said. “How can they translate those skill sets and their passions into educational and career opportunities?”

Backed by a $264,000 grant from the Tony Hawk Foundation, the USC researchers have already completed a national survey of skaters between ages 13 and 25. They are also conducting in-depth interviews with skaters and community stakeholders in seven regions of the country to gain greater insight into the challenges and opportunities facing skateboarders. 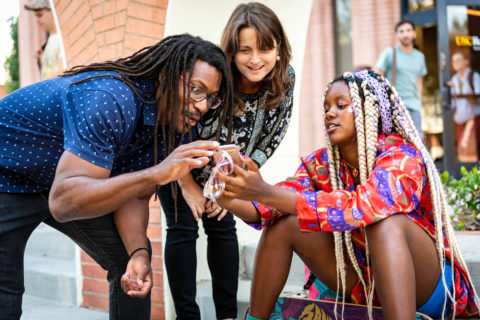 “We’re taking the time to figure out what skaters and young students are dealing with in their lives, what they see as impeding them from going to college and being successful in a career,” said study collaborator Neftalie Williams, an adjunct professor at the USC Annenberg School for Communication and Journalism and an expert in skate diplomacy and issues of race and diversity in skateboarding culture. “We want to take the next step, to encourage young skaters to succeed in academia or the next phase of their life.”

A major goal of the study is understanding how skateboarders are perceived and how they view themselves. Some people still picture the counterculture skaters of the 1960s and 1970s. Others think about the glossy multibillion-dollar skateboarding industry of today, with its lucrative clothing brands and high-profile televised competitions.

That tension continues to exist. Many young skaters embrace the sport’s underground roots even as it gains greater visibility as a new competition in the 2020 Olympics.

Despite skateboarding’s emergence in mainstream culture, Diaz said that many still associate it with drugs and vandalism. He started skating as a way to get around town, and then he learned a few tricks.

“It was something fun to do with my friends,” he said. “But they see us as bad people, bad kids.”

He wants more people to acknowledge the benefits of skateboarding. He has learned to be persistent, hauling himself off the pavement repeatedly while learning a new skill. That mentality is paying off now that he’s studying engineering and mathematics at California State University, Los Angeles.

As the first member of his family to attend college, Diaz said it has been challenging to feel comfortable in the rigorous academic environment. But if he struggles with an assignment or a test, he returns to the lessons he learned on his skateboard.

Understanding their contributions to society can help skaters thrive

Corwin would also like to see more segments of society appreciate the talents of skaters, including in her area of expertise: higher education. She said college leaders and admissions officers should value the skateboarder as much as the dedicated community volunteer, star athlete or budding scientist.

“Someone might say, ‘I’ve been skating since I was 8 years old, I’ve mastered all these tricks, I’ve advocated in my community and helped build this skatepark,’” she said. “Surely that’s the kind of student we’d want in our university classrooms.”

The issue is we need to better understand what skateboarding means to young people — and how to capitalize on that passion in other areas of their lives.

In addition to interviewing skateboarders during visits to places like The Garage Board Shop, USC researchers have been talking with police officers, business owners, school leaders and other community members. Corwin is optimistic that the research project will identify strategies to build awareness of skateboarding’s positive influences among those groups.

“If someone is passionate about skateboarding, that is an asset,” she said. “The issue is we need to better understand what skateboarding means to young people — and how to capitalize on that passion in other areas of their lives.”

Jerry Carrera is already seeing attitudes toward skateboarding change in his East L.A. neighborhood. He cofounded The Garage Board Shop with his son, Christian, 11 years ago. His wife, Maria “Patty” Ramblaz, is the owner. She also founded The Urban Warehouse (Skate 4 Education), the shop’s after-school program. 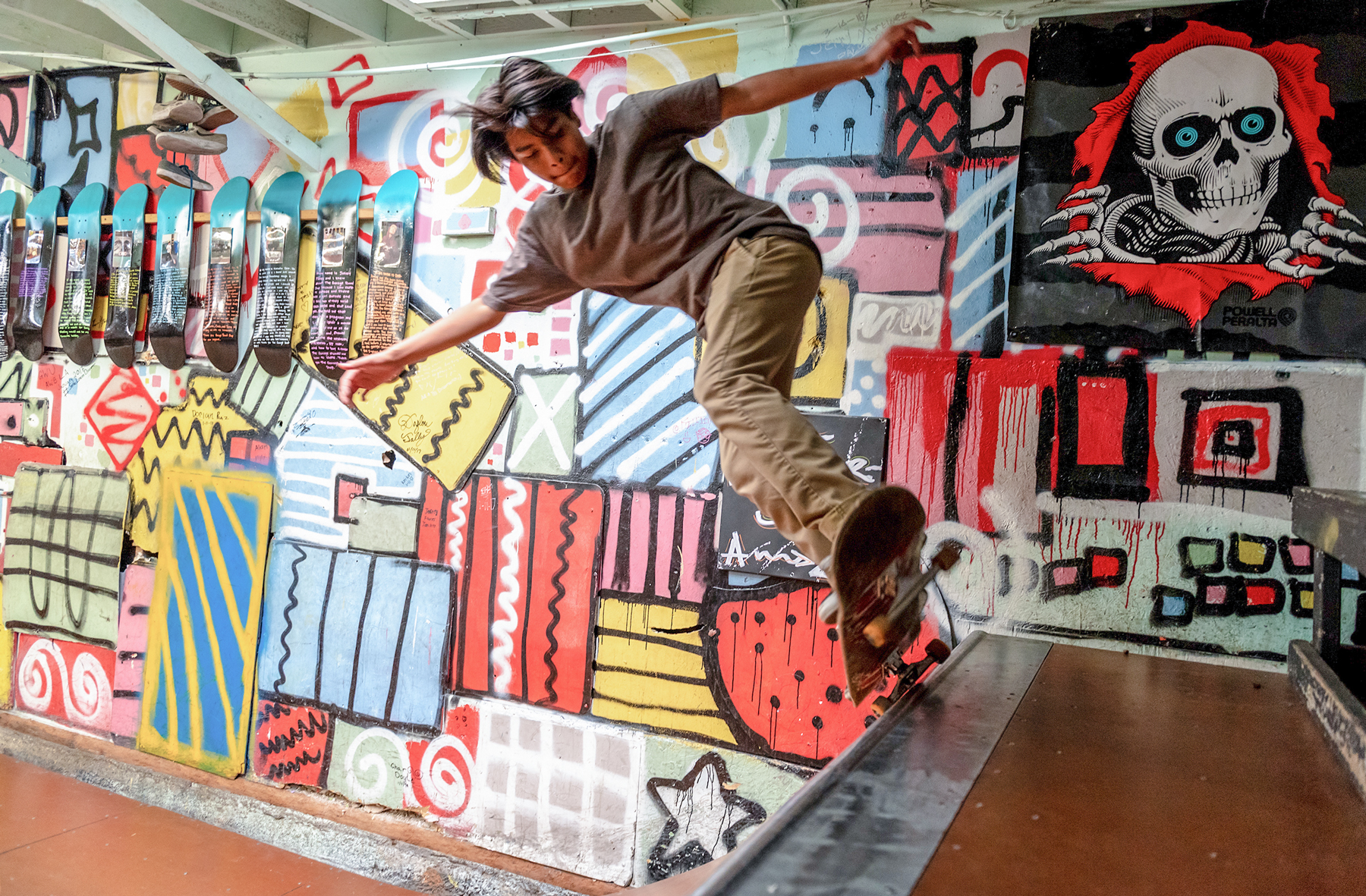 Young skateboarders can practice their tricks at The Garage Board Shop in East Los Angeles — after they finish their homework. (USC Photo/Eric Lindberg)

Hundreds of kids have benefited from the shop’s educational and entrepreneurial focus. Some have gone on to community college or a four-year university with support from a scholarship fund established at the shop. Others designed their own skateboarding or clothing brands as young teens, with the goal of launching a business after high school.

“They’re planning their careers at 8, 9 years old,” Carrera said. “Now people are starting to pay attention. More organizations are doing the after-school tutoring, the skate-for-education programs. The reality here is that rewarding these kids for going to school is what is going to create their future.”

The USC researchers hope their findings can guide more resources to these teens and young adults by highlighting unique needs in different segments of the skateboarding population. They envision the skateboarding industry, educational institutions, community organizations and other groups collaborating to support skaters.

How to tell a skateboarding saga with a kickflip

With her education in narrative studies, alumna Amelia Brodka exposes the story behind the barriers faced by women on wheels.

She got her first board at the age of 12 after seeing X Games in Philadelphia, and she’s been hooked ever since. Skateboarding for Amelia Brodka ’12 is more than a hobby. It’s her life.

USC researchers explore how skateboarders can succeed in school and life