Airborne lead from recycled car batteries at the Exide plant in Vernon ended up in the baby teeth of children living nearby, a USC study shows.

“We found the higher the level of lead in the soil, the higher the amount of lead in baby teeth,” said first author Jill Johnston, an assistant professor of preventive medicine at the Keck School of Medicine of USC. “There’s no safe level of lead; it’s a potent neurotoxin. Our study provides insight into the legacy of the impact of industrial contamination on children.”

The Exide plant, located just southeast of downtown Los Angeles, recycled 11 million auto batteries per year and released 3,500 tons of lead until it closed in March 2015 as part of a legal settlement for hazardous waste violations.

As many as 250,000 residents, mostly working-class Latinos, face a chronic health hazard from exposure to airborne lead and arsenic that subsequently settles into the soil, according to a 2013 health risk assessment by the South Coast Air Quality Management District.

Using laser ablation and an analytical technique for molecular-level information, the researchers were able to look at the teeth layer by layer and assign time points for lead contamination, such as the second trimester of pregnancy, when teeth are starting to form in the mother’s womb.

They also measured lead and arsenic in the tooth dentine that begins to form during the third trimester, when the baby is growing rapidly and incorporates nutrients and toxins from its mother. Finally, they could see contamination acquired after birth, during the baby’s first year. Infants are at higher risk of exposure because they crawl and put their hands in the mouths.

The teeth findings were matched with soil contamination data from the California Department of Toxic Substances Control, which collected 117,356 samples from the upper layers of soil on nearly 8,000 properties. Researchers found the median concentration of lead in soil was 190 parts per million (ppm), well above the state of California threshold of 80 parts per million. Fourteen percent of soil samples exceeded 400 ppm. 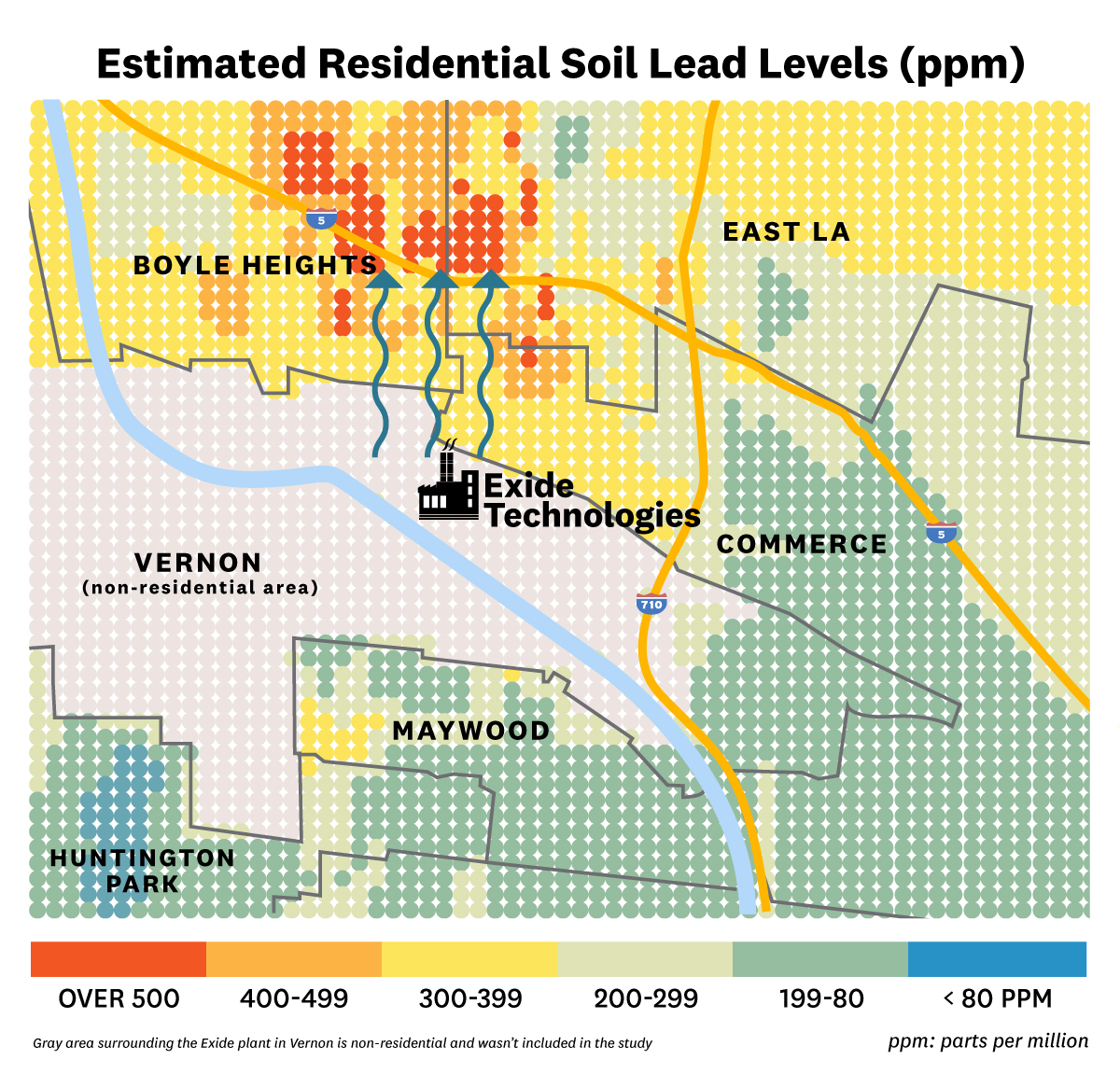 In some cases, higher exposure occurred while the baby was still in the womb, meaning that the mother’s exposure to lead – such as from dust tracked inside on the feet of people and pets – was transmitted to her unborn child.

The need to test for lead and decrease exposure

Few studies have looked at lead in teeth, so there is no established baseline for comparison. However, the communities around the Exide smelter had twice as much lead as that found in a similar urban community in Boston that did a tooth-based research study.

The researchers said measuring lead in shed baby teeth is a promising technique to assess prenatal and early life exposure. Though lead exposure is typically measured via blood tests, they only reflect recent exposure. Lead from past exposures – measured via teeth – may be an important indicator of harm.

“Higher lead in teeth means higher lead in the brain, kidney and bones,” Johnston said. “Testing women for lead during pregnancy, or even earlier, as they enter child-bearing age, may be needed to decrease lead exposure to their future offspring.”

In addition to Johnston, the authors included Meredith Franklin and Hannah Roh of the Keck School and Christine Austin and Manish Arora of the Icahn School of Medicine at Mount Sinai.

The research was supported by a grant from the National Institute of Environmental Health Sciences (5P30ES007048), and with assistance from the East Yard Communities for Environmental Justice and Resurrection Church.

A new USC study suggests that early exposure to traffic pollution may be linked to unhealthy diet in adolescence.

Most teens who tried marijuana used it in various forms, research finds