Jill Johnston, an assistant professor of preventive medicine at the Keck School of Medicine of USC, is in the midst of a study measuring levels of lead and other toxic metals near the 15-acre Exide Technologies facility in Vernon. Her study examines the rings in baby teeth to reveal lead exposure during pregnancy and early childhood, similar to the way that people count tree rings to determine age.

The Exide plant, which shuttered in March 2015, exuded decades of air pollution and toxic dust that may have contaminated up to 10,000 homes.

Gov. Jerry Brown has approved spending more than $176 million to test and remove lead from thousands of homes within a 1.7-mile radius of the Exide facility. The cleanup price tag is up to $50,000 per property, according to an initial assessment by the California Department of Toxic Substances Control.

Johnston explains some of the health risks faced by Vernon residents.

Some of the chemicals found near homes in Vernon include arsenic, benzene and 1,3-Butadiene. How dangerous are these chemicals to people?

These chemicals may increase the chances of being diagnosed with a handful of cancers and even attack your bone marrow. Arsenic is a toxic metal that can be found in air, water, soil or dust. Exposure to arsenic can increase risk of skin, liver, bladder and lung cancer. Arsenic exposure may harm intelligence in children.

Benzene is released as a gas during industrial processes. Breathing benzene can cause dizziness and fatigue. Long-term exposures can harm bone marrow and is associated with risk of leukemia. Benzene is airborne and not likely to build up in the soil.

Lead is a metal found in the environment: Soil, rocks, air and water could naturally have it. At what levels is lead safe?

Lead poisoning is preventable and exposure to lead at any level may be harmful. Almost all the exposure to lead is a result of human activity, such as the use of lead in gasoline, paint and pipes or industrial activities such as the smelting of car batteries. Currently, the state of California considers soil “safe” for residential use if the lead levels are below 80 parts per million. Even very low levels of lead in the blood can harm brain development in young children.

What could happen to pregnant women exposed to unhealthy amounts of lead?

Lead in a pregnant woman can pass from the mother to her unborn baby. High levels of lead increase the risk for miscarriage, preterm birth, low birth weight as well as damage to the brain, kidneys or nervous system of the baby. 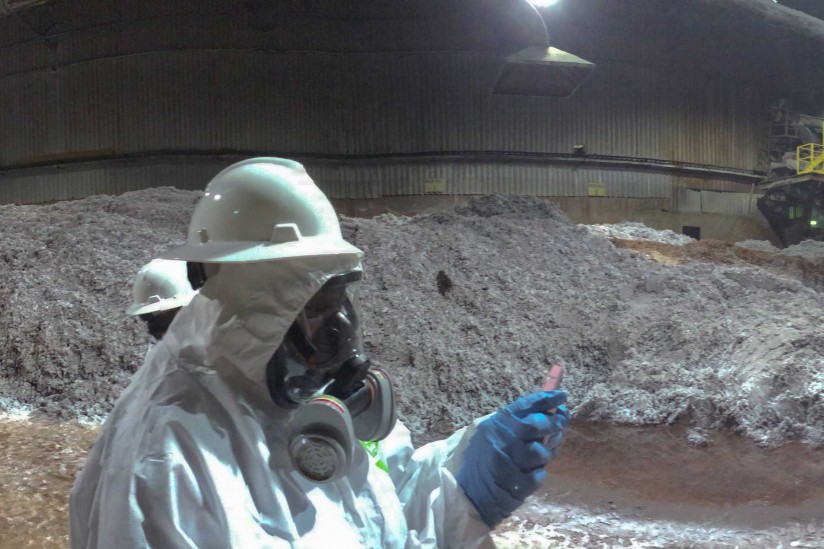 A worker investigates findings at the Exide facility. (Photo/Department of Toxic Substances Control)

What could people who know they live in potentially lead-contaminated areas do at home to lower the chances of lead poisoning?

It is very important for residents to have their soil and blood tested for lead if possible. Ultimately the solution is to get rid of the source so the exposure cannot continue to occur.

However, easy steps to try to limit exposure include frequent hand washing, playing outside in areas without bare dirt [for example, in sandboxes or mulch], keeping shoes outside, and dusting floors and other surfaces with a damp cloth or mop.

Exposure can result in problems with learning and behavior in the child. There is some evidence that eating food with calcium, vitamin C, iron and zinc can reduce the absorption of lead.

If a family member works with lead, it is important that they shower and change their clothes and shoes before leaving work.

Toxicologist Sean Nordt, an associate professor of clinical emergency medicine at the Keck School of Medicine, adds to the conversation about lead contamination.

What are some signs of lead poisoning?

The signs and symptoms of lead poisoning depend upon whether it is a larger, intense exposure or chronic, lower-level exposure. Acute lead poisoning can cause abdominal pain, seizures and brain swelling or even death.

Between what ages is lead poisoning most dangerous?

Children younger than 2 years old are generally considered at highest risk as they spend more time on or near the floor; they are more likely to place their contaminated hands in their own mouths. However, as neurologic growth and development continue throughout childhood, children with persistent elevated blood lead concentrations can be at risk for lead toxicity.

Should people who live in older homes with layers of lead paint remove it themselves?

They should not try to remove it themselves as that would produce increased environmental levels of lead. If lead paint is in the home and needs to be removed, a specialist in safe lead removal should be consulted.

What should anxious parents do?

Parents who are concerned that their child is at risk of lead poisoning should speak with their pediatrician about potential lead blood testing.

For Kristin Reichardt, the COVID-19 pandemic has underscored the critical need for experienced, passionate and knowledgeable public health professionals.