In 1920, the first cohort of the newly formed College of Commerce and Business Administration at USC distinguished itself right from the start: Among the many young men in that first class were also three young women in business.

Fast forward 100 years and the USC Marshall School of Business is notable for a similar reason: Its incoming full-time MBA Class of 2020 is the first cohort to include as many women as men — maybe even a few more women — 52 percent.

“We are proud to achieve this distinction,” said James G. Ellis, dean of USC Marshall. “Our ongoing focus on diversity and inclusion is playing out in real numbers now.

“This is only the start,” he added.

A 2017 report from the Forté Foundation, a nonprofit consortium of companies, business schools and the Graduate Management Admissions Council (GMAC) shows that the average enrollment of women in full-time MBA programs at business schools in the U.S. rose to about 38 percent (37.8 percent), up less than 1 percent  from 37.1 percent in 2016. In 2013 that number was 34 percent. 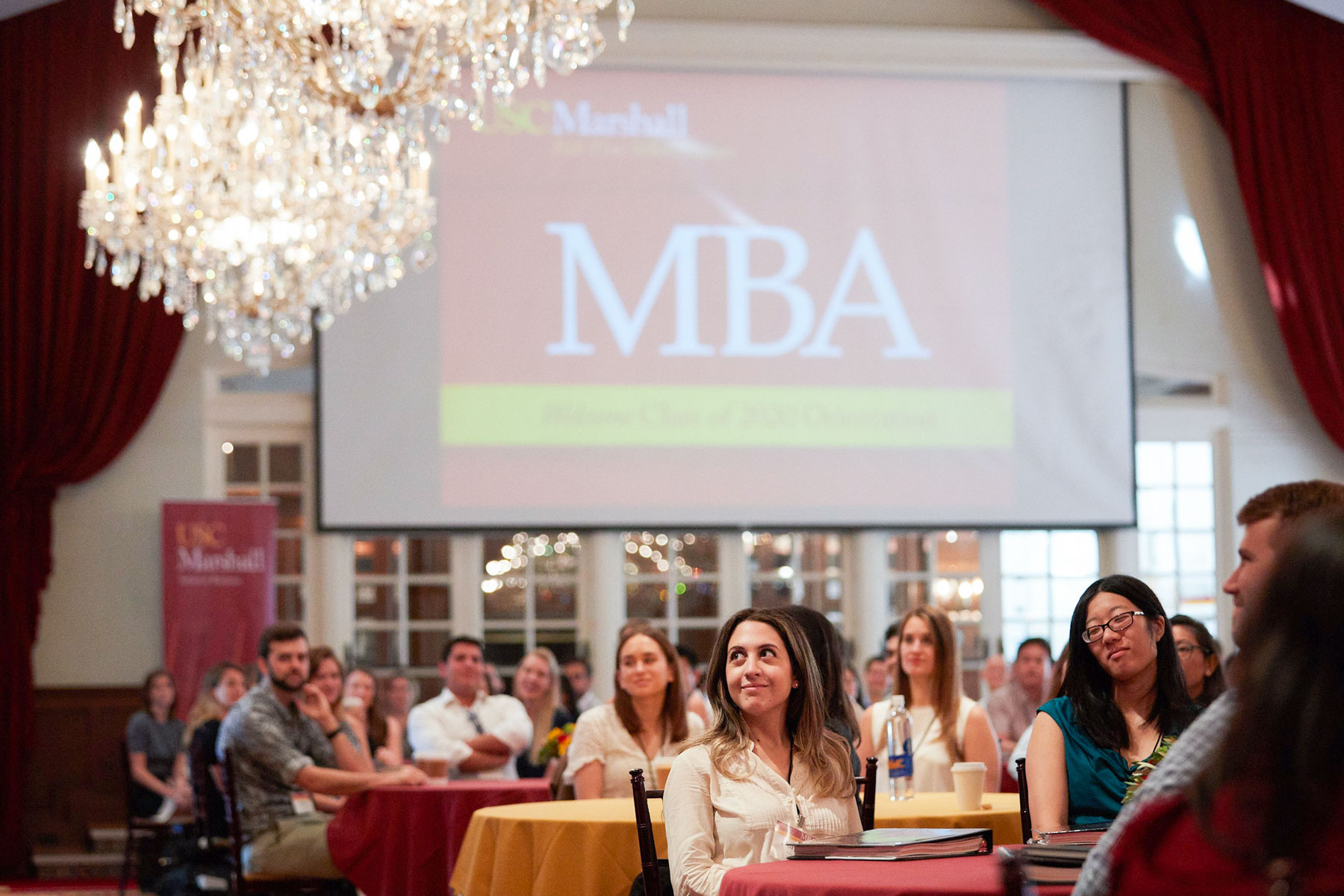 Other studies suggest the number is lower. According to the business school accrediting body AACSB, the share of women in business schools to receive full-time MBA degrees in the U.S. was below 38 percent from mid-2012 through mid-2017.

Although women earn 60 percent of graduate degrees and make up more than 50 percent of many graduate program classes, including those that feed traditionally male-dominated professions such as law and medicine, their numbers have lagged in Master of Business Administration programs.

Experts cite a number of possible reasons, including timing and return-on-investment. Most MBA programs mandate several years of experience in the workplace before applying, making the average age of a first-year student at 28.

Research shows that men with an MBA go on to out-earn their female counterparts as their careers progress.

USC Marshall program administrators point to laying the groundwork over the past few years that increased messaging to prospective students and strengthened the applicant pool. Increased women’s programming over that same time period, such as Women’s Day and other events, also played a role.

This year’s applicant pool was the strongest in our program’s history.

“This year’s applicant pool was the strongest in our program’s history,” said Evan Bouffides, assistant dean and director of the full-time MBA program. “They brought the highest GMAT score (705) and the highest average GPA (at 3.5). The women in particular were extraordinarily well prepared.”

While impressive on the front end, the 2020 class profile is good for the end game as well.

“With more than 50 percent of our 2020 class women, it gives us a talent pipeline that employers are hungry to tap into as they go about increasing the diversity of their executive staffs,” said Mark Brostoff, assistant dean and director of graduate career services for USC Marshall. “Recruiters are very happy with this great news.”

✌ Class of 2017: The daughter of migrant farm workers is opening a company aimed at helping the underserved.

Trojans visit the Pacific Northwest, where they talk about the business behind sports.