He might be best known as the frontman of the band Black Eyed Peas, but will.i.am is not only that.

He’s an entrepreneur and a philanthropist, dabbling in everything from artificial intelligence to eyewear and education. He’s advised on both the first mobile record company and first mobile bank.

So, it was appropriate that he was asked to speak Friday at the USC Jimmy Iovine and Andre Young Academy’s inaugural commencement ceremony, which celebrated 30 students not unlike will.i.am — students who can’t be pigeon-holed as engineers, designers or artists but instead are big picture problem solvers.

If the academy had been around in the mid-’90s, when will.i.am graduated high school, maybe he would have applied.

When the first cohort walked through the academy’s doors four years ago, they agreed to be guinea pigs for the first curriculum of its kind. The concept dreamed up by record producer Iovine and the musician Dr. Dre, who had struggled to find the right people to work for their headphones company Beats — three-dimensional folks who knew technology and but also were immersed in popular culture.

The academy, which this month became USC’s newest school, was built thanks to Iovine and Young’s $70 million donation, leading to USC’s first Bachelor of Science degree in arts, technology and the business of innovation.

If the reality of this new style of education got even close to the vision, it could change the world.

“We did this for one reason … that if the reality of this new style of education got even close to the vision, it could change the world,” Dean Erica Muhl told the crowd of graduating students and their families.

The academy attracted a crop of students who didn’t necessarily fit in the traditional academic route — students who had built apps in high school, had products on shelves at age 12 or had ideas for the perfect skateboarding shoe.

New graduate Louis Harboe remembered applying to colleges and having to choose a major. 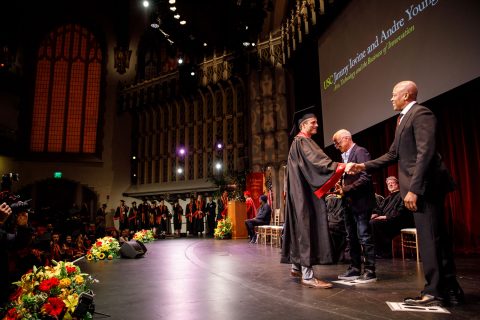 Will Erwin receives his diploma from Jimmy Iovine and Andre Young. (Photo/Dustin Snipes)

“I didn’t know what to choose. I had too many interests. I liked art and math and computer science and biology. I played guitar. I built websites,” he said. “This choice of what I wanted to major in, it kept me up at night. I have a feeling it kept a lot of us up at night.”

To create something new, he proposed, you have to think outside the box.

The academy allowed that.

A different way of working

Students worked collaboratively on teams, hungout in the “Garage” where they could write on rolling whiteboards or head to the workshop to 3-D print a prototype. They studied everything from art and science to venture management and mixed reality. Many interned in the Silicon Valley or Silicon Beach and some started their own companies, such as Mira, an augmented reality startup with offices in Downtown L.A., which has will.i.am as an investor. One student, Amri Rigby, couldn’t make Friday’s ceremony because he was in Peru, filming with director Werner Herzog.

Muhl noted they’ve widened their perspectives technically but also as people — some turning down full-time jobs at tech companies, like Facebook, to advance women’s issues on Capitol Hill or teach in Philadelphia’s inner-city schools.

In his address, will.i.am urged the students to continue to surround themselves with opposing viewpoints and disciplines.

“Right when you get some success, don’t bathe in it,” will.i.am said, who grew up in housing projects in Boyle Heights. “You have to have that desire, that fire in your belly to continue to burn — to find new areas to set your flame upon.”

He asked them to pass the torch to those who follow.

“Keep in mind, you guys were the first. What are you going to do to mentor the next class?” he said.

Right now, the academy is getting its own building, scheduled to open next year. Within it, will be a lab specifically for alumni, so they can continue to collaborate — and usher in the future generation of interdisciplinary problem solvers.

Rose Campion: ‘How can I use my USC degree for good?’

USC 2018 valedictorian looks to the past for lessons that will inspire the Class of 2018 in the future.

Tina Knowles Lawson: ‘Your world is only as big as you can see’

USC’s baccalaureate speaker — a philanthropist and fashion designer — discusses the importance of mentoring and how that affected her role as Beyoncé and Solange’s mom.