It started with a miraculous, last-second Rose Bowl win and ends with … well, we’ll find out after tonight’s Cotton Bowl game is over. For Trojan athletes, it was another stellar year of great performances on and off the field. Roll the highlights.

Rose Bowl win is one for the ages 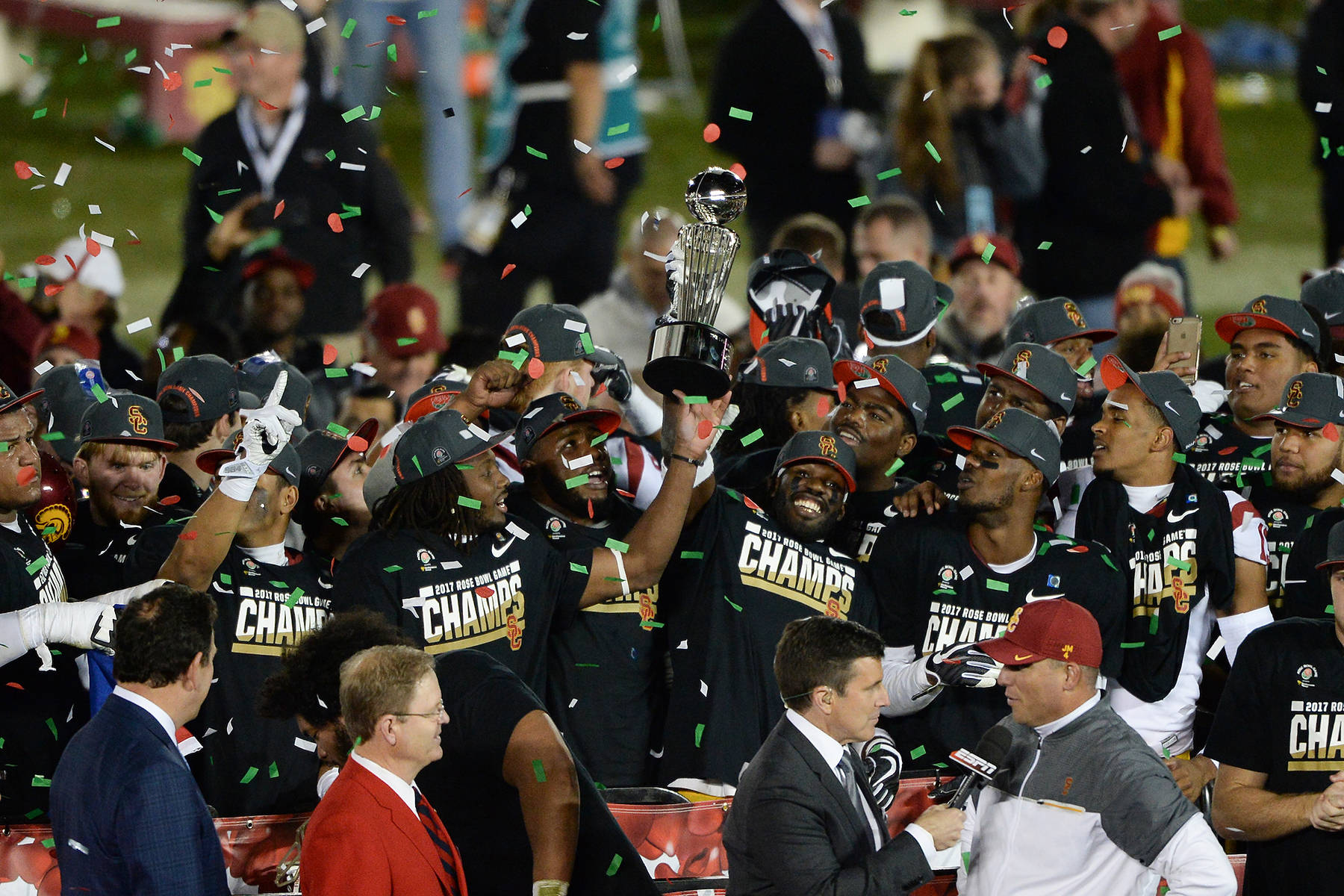 It took an incredible set of circumstances for the not-Pac-12-champion Trojans to represent the conference in the granddaddy of them all. But represent they did, taking on a formidable Penn State team that pushed the game to the last second of the last play of the game. Some call the Trojans’ 42-39 win the greatest Rose Bowl victory of all time.

Three in a row 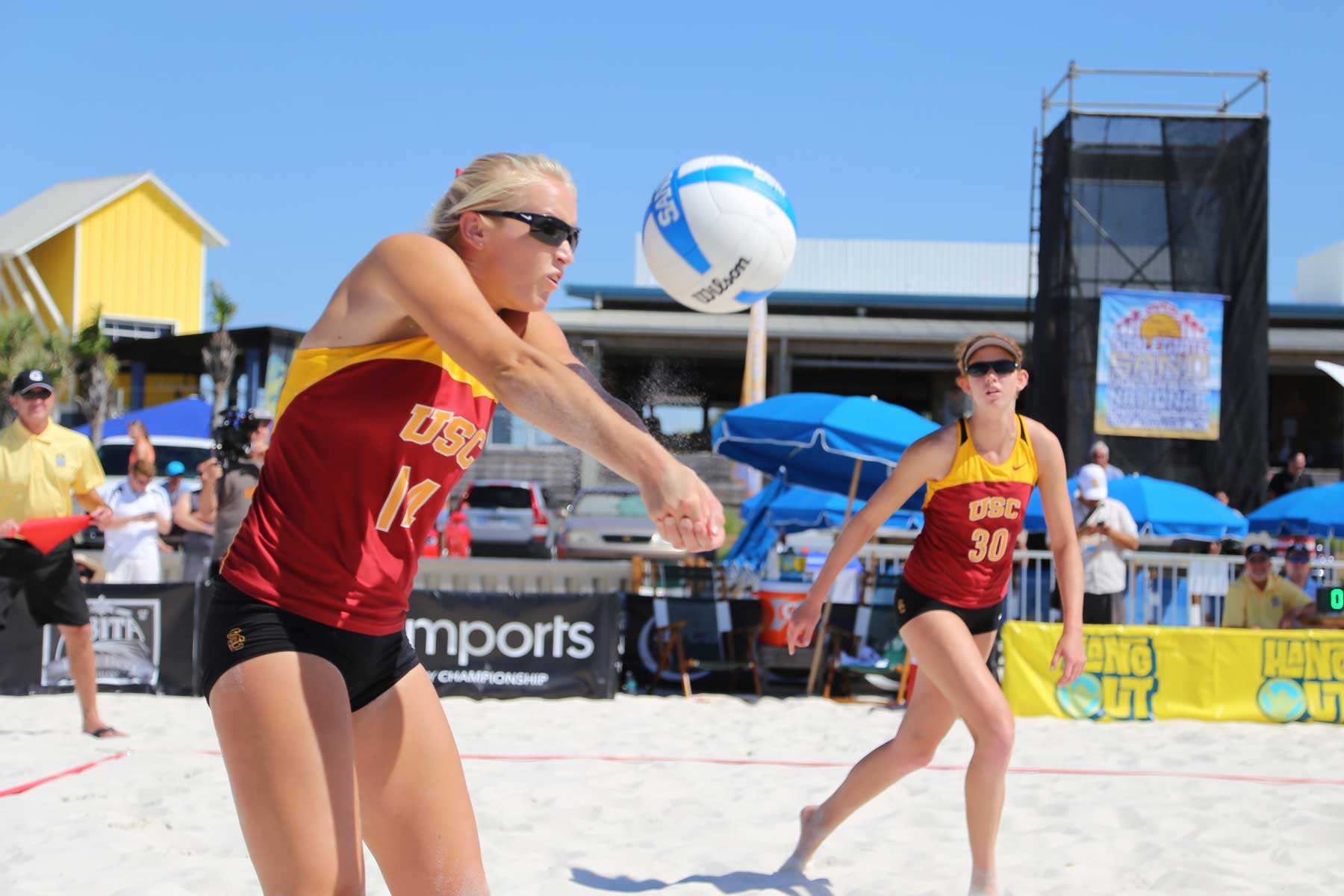 They entered the tournament top-ranked and top-seeded, and ended it the same way. Behind the near-unbeatable pairs team of Sara Hughes and Kelly Claes, the women’s beach volleyball team took home its third consecutive national championship. 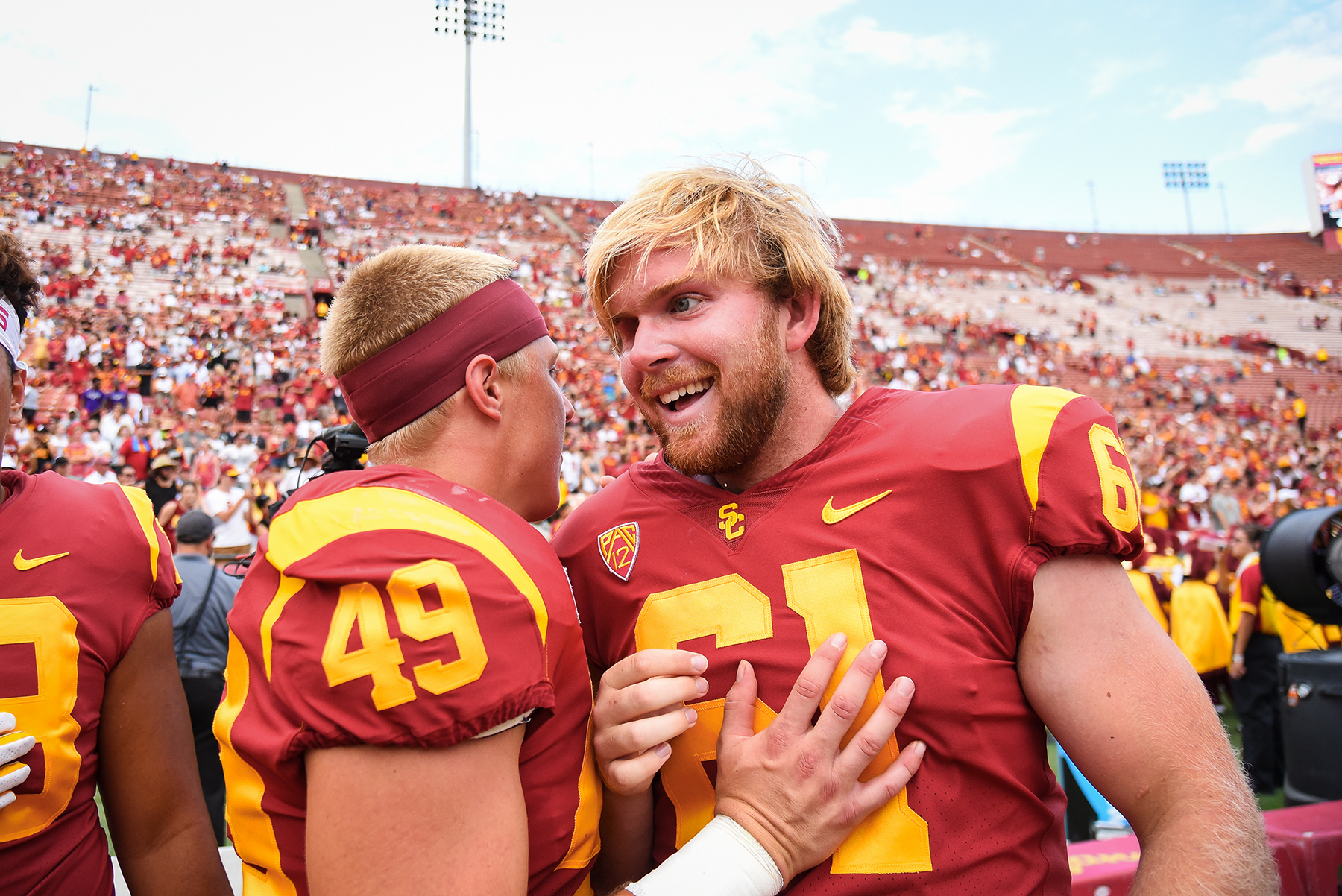 Jake Olson lost his eyesight at age 12, but that didn’t stop his dream of attending USC and playing football for the Trojans. The lifelong Trojan fan made the team as a long snapper and on Sept. 2 he took the field against Western Michigan, with a perfect snap that led to a perfect extra point.

Running to a relay record 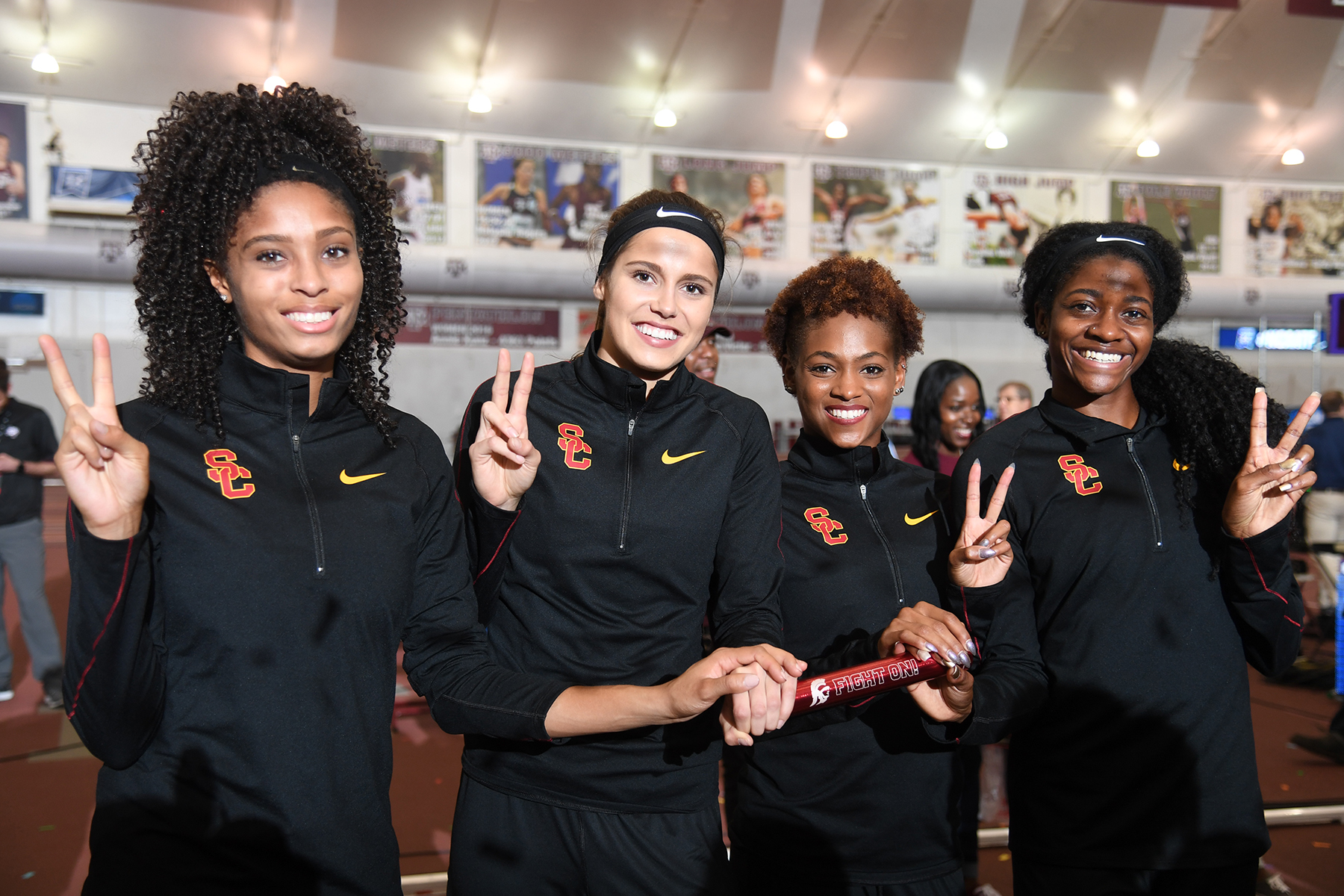 USC’s women won the 4x400m relay with a collegiate record time as the NCAA Indoor Track Championships came to a close May 11. The USC women’s team took fourth place and the men’s team — which held several key members out of the indoor championships to ensure their heath for the outdoor season — finished 21st. 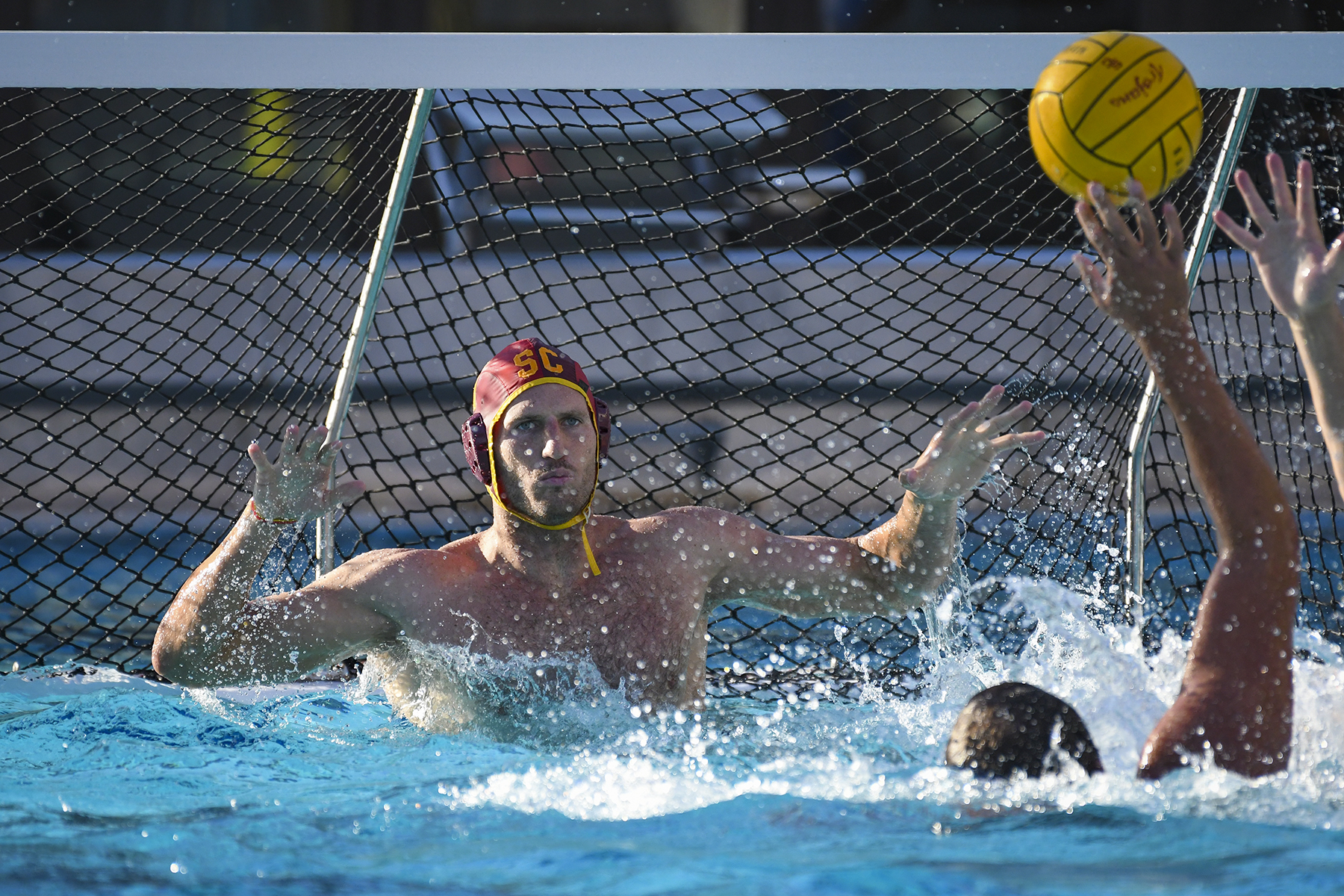 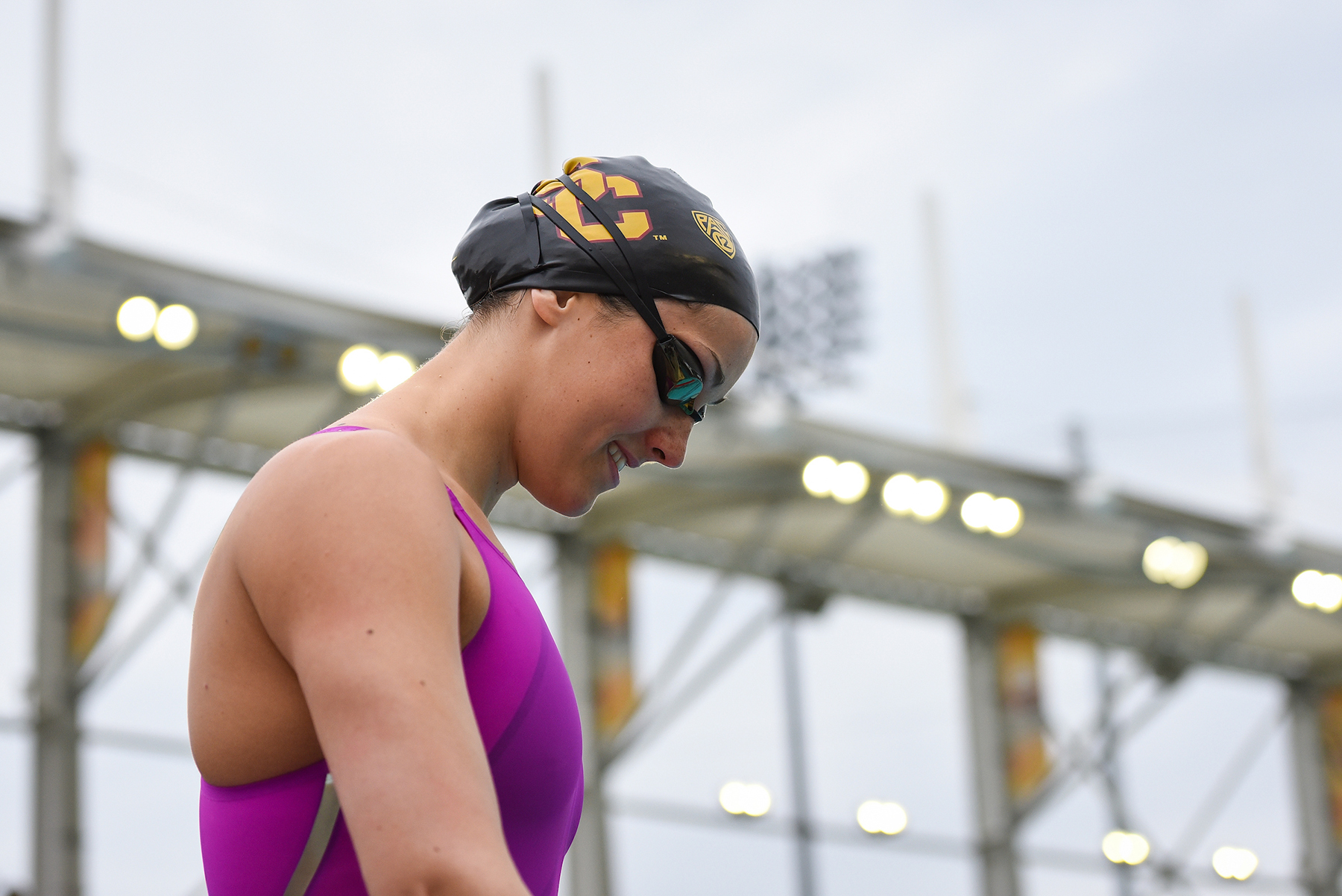 Anika Apostalon found recognition in the pool and the classroom. (USC Photo/John McGillen)

Trojan All-American and NCAA champion Anika Apostalon was named to the CoSIDA Academic All-American First Team and also named the Pac-12 Conference Woman of the Year, presented annually to a graduating student-athlete who has distinguished herself in academic achievement, athletic excellence, community service and leadership. A nine-time All-American, eight-time NCAA individual scorer and 2016 Olympic Trials semifinalist, Apostalon led her team as co-captain while maintaining a 3.92 grade point average in psychology. 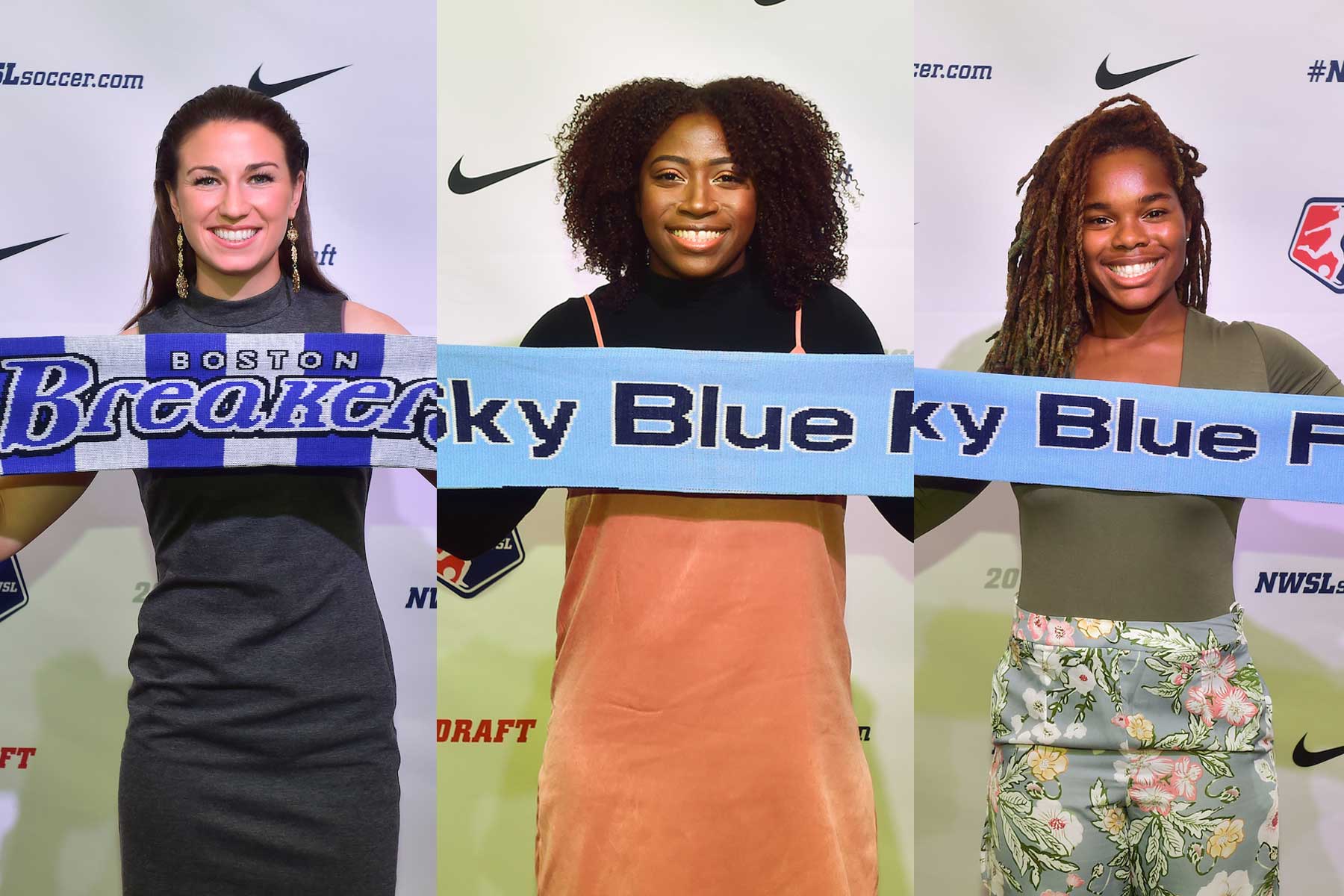 Five Trojans off the women’s soccer 2016 national championship squad were selected in the 2017 National Women’s Soccer League Draft — the most Trojans taken in any professional women’s soccer league draft, and the most selected from any program in the 2017 draft. Morgan Andrews, Kayla Mills and Mandy Freeman all went in the top 10, Katie Johnson went in the second round and Sammy Jo Prudhomme went in the fourth round. The only previous USC player to be drafted in an NWSL Draft was Elizabeth Eddy, who plays for the North Carolina Courage. 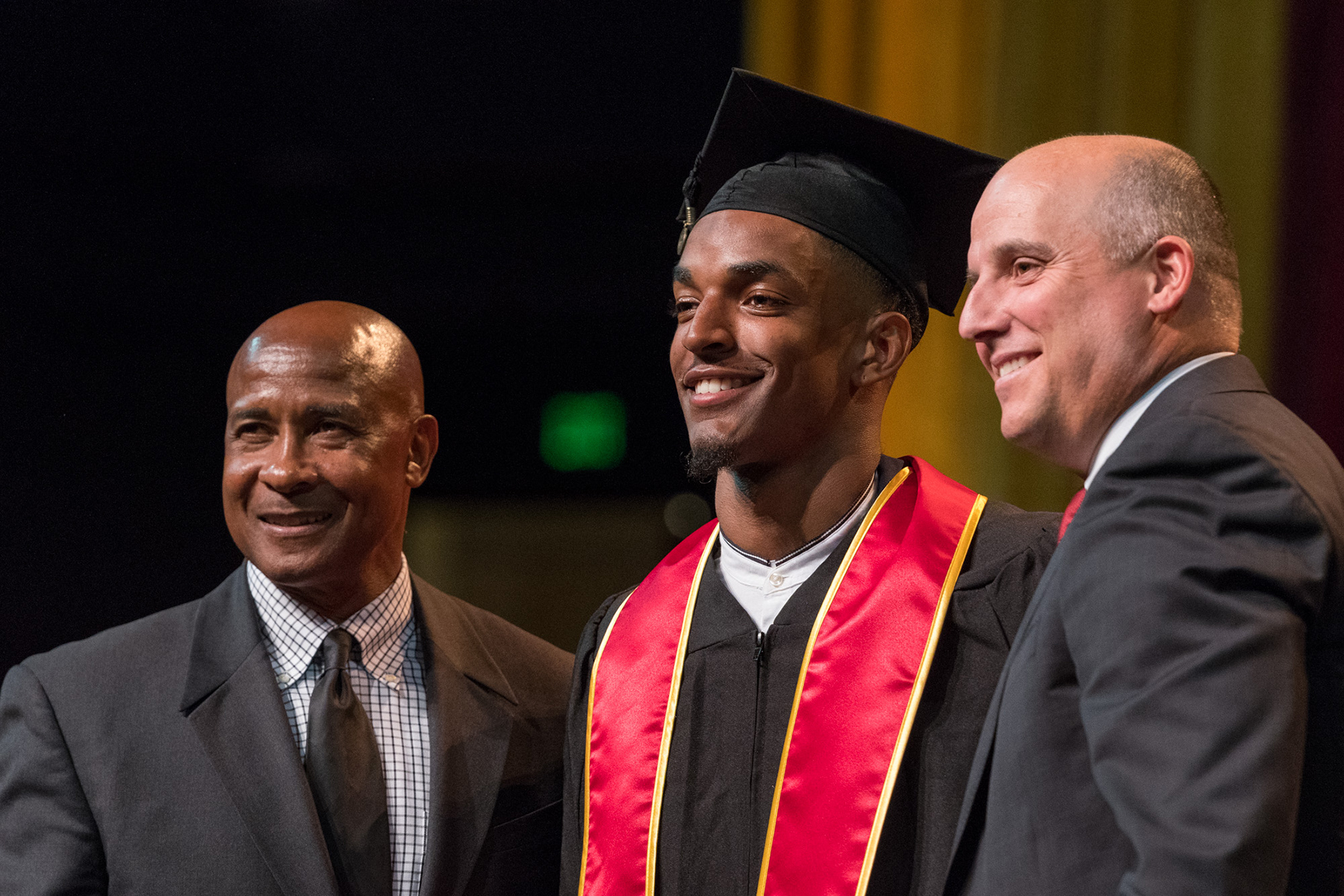 The young men and women who represent USC on the athletic field are standouts in the classroom, too: For the fourth consecutive year, the graduation success rate of USC student-athletes is at an all-time high — 86 percent, according to the NCAA. The 2017 number measures how many student-athletes in the incoming classes of 2007 through 2010 graduated within six years of their enrollment. That 86 percent figure, 18 percentage points higher than it was 10 years ago, comes on the heels of USC’s previous-best rates of 80 percent in 2014, 81 percent in 2015 and 83 percent in 2016. 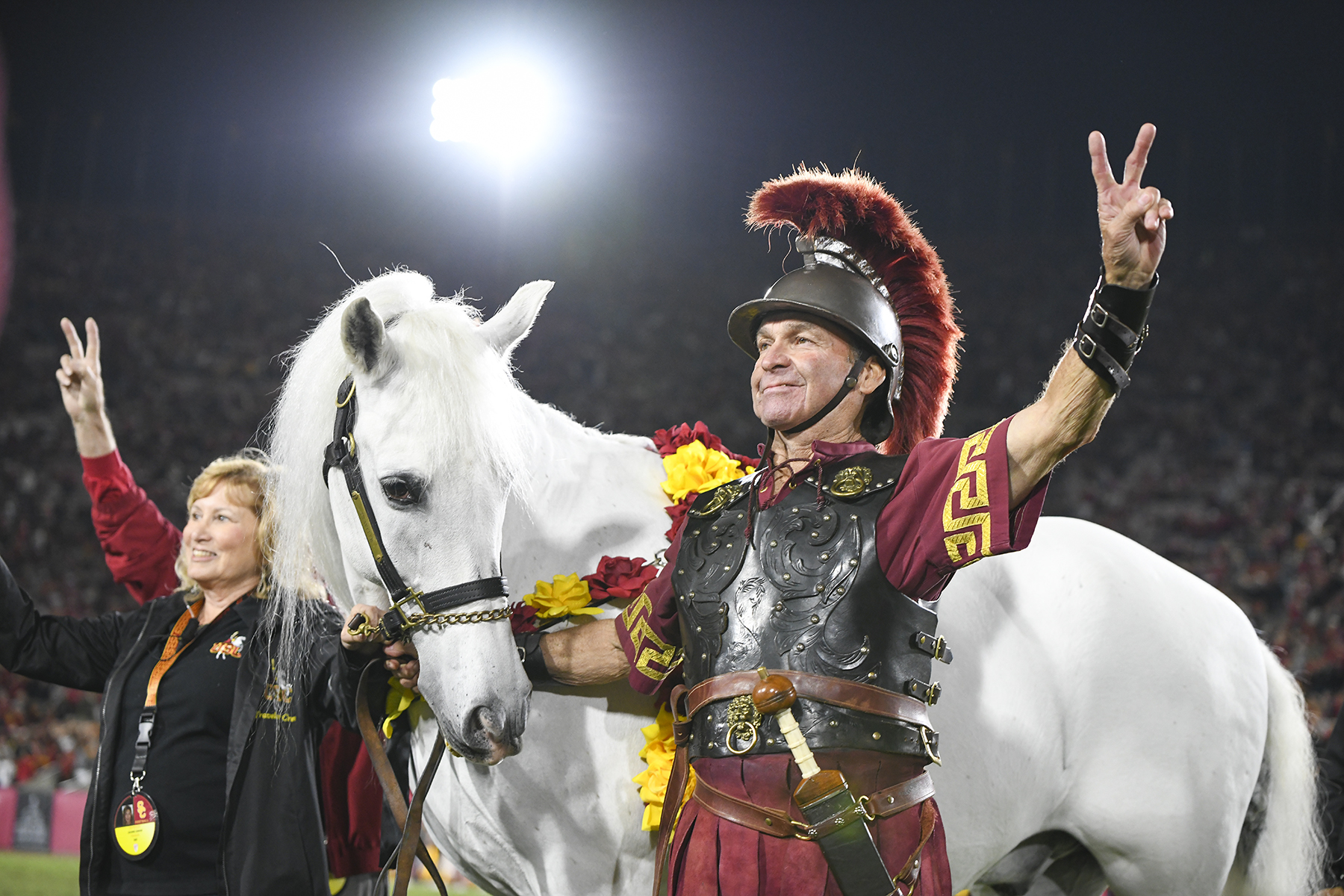 Traveler joins the other USC Athletic Hall of Fame inductees on the field at the Coliseum. (USC Photo/John McGillen) 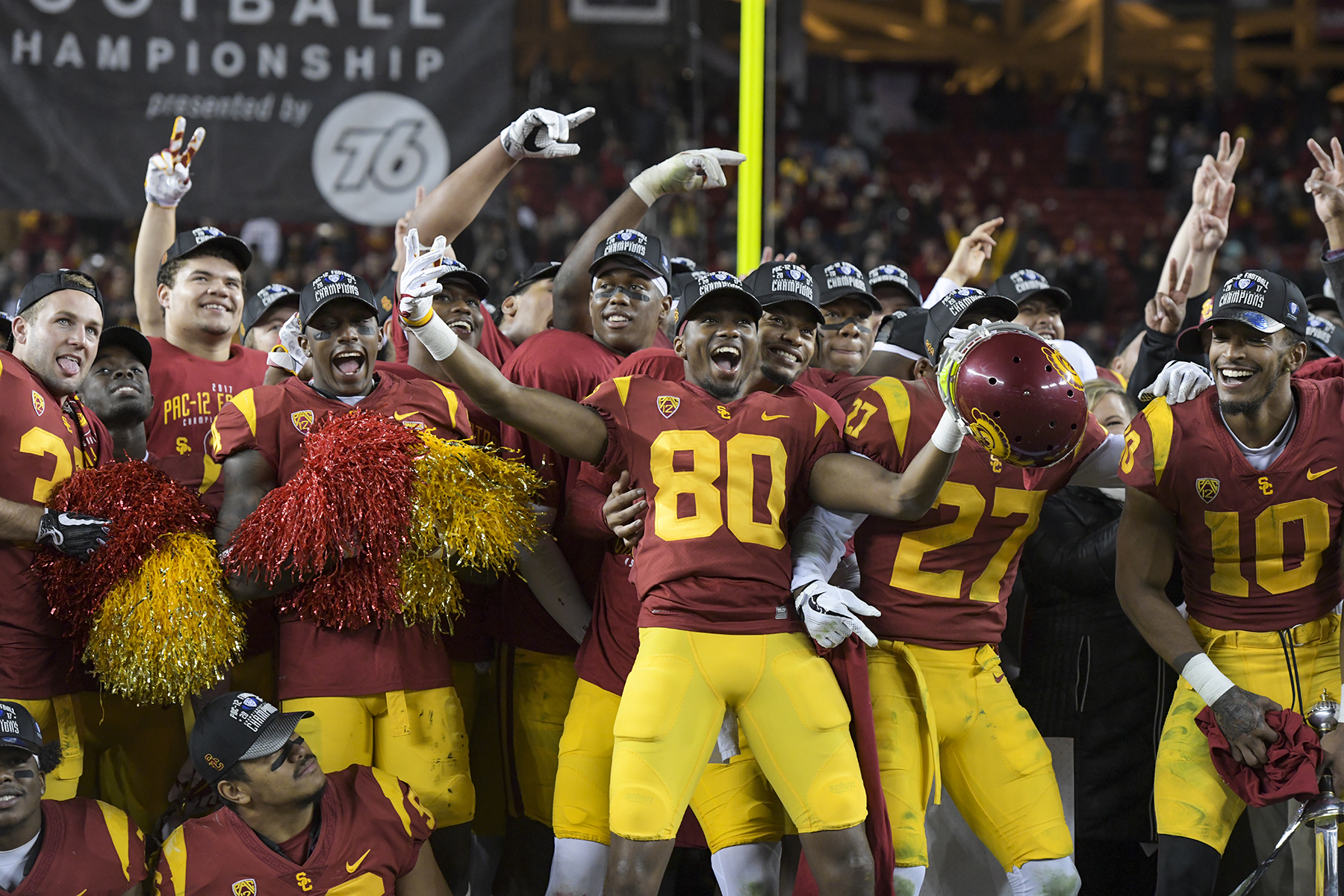 In a season with more than a few nail-biters, the football squad captured the South Division title, then went on to beat Stanford for the second time this season and claim the Pac-12 crown. Next up is today’s Cotton Bowl matchup (5:30 p.m. PST, ESPN) in Arlington, Texas, against Big 10 champion Ohio State (both teams would have been in the Rose Bowl, but this year the Pasadena game is part of the College Football Playoff). Take note: Since the 11-2 Trojans lost to Notre Dame on Oct. 21, they haven’t trailed once. Fight on!

‘The Great One,’ whose career included eight seasons with the Kings, joins Lynn Swann during the trophy’s visit to Hahn Plaza.

The team starts next season against UNLV and wraps up with UCLA and Notre Dame back-to-back.

The conference’s governing body includes all 12 university presidents and chancellors.

The adviser to President C. L. Max Nikias is recognized by the National Association for Athletics Compliance.

USC 2017 | This year’s greatest moments in Trojan sports, from the field to the pool to the court