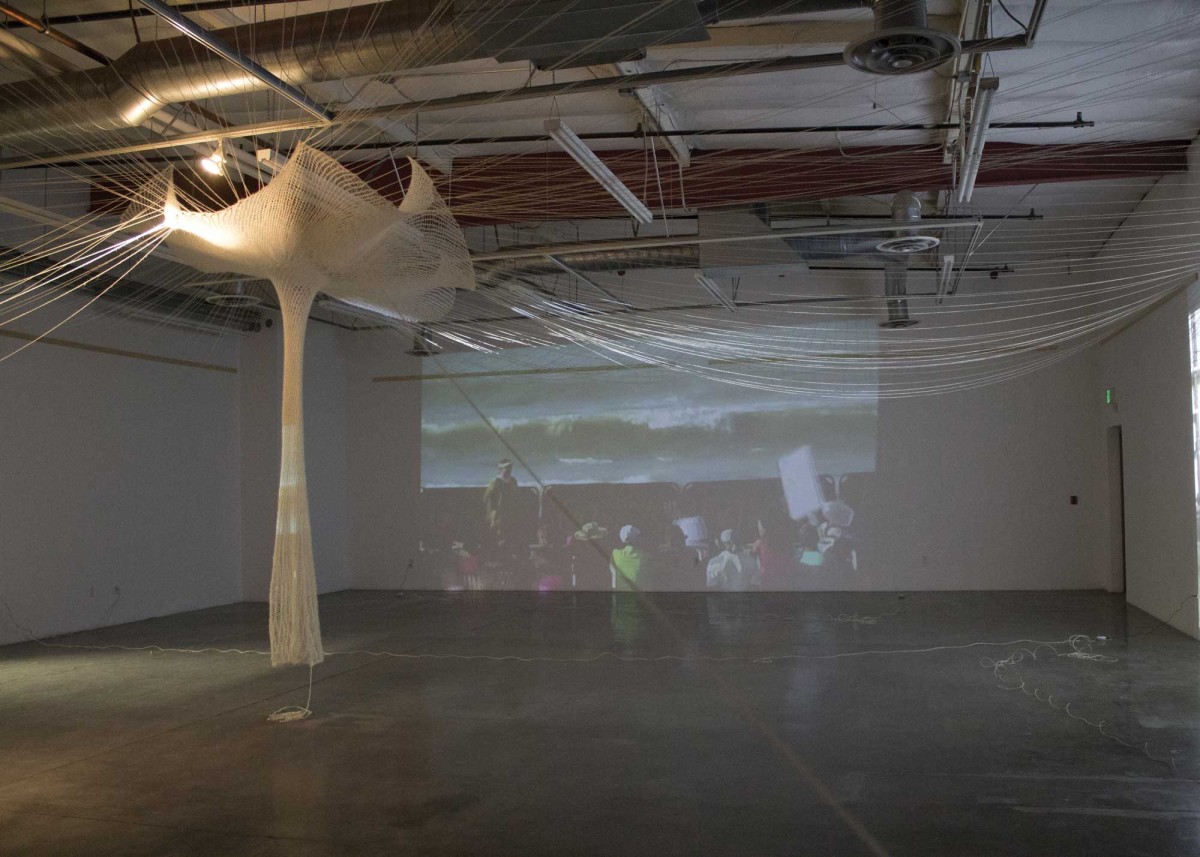 Finding meaning at the intersection of art and sound.

Armed only with a small canvas backpack, a video camera and an artistic vision honed at USC Roski School of Art and Design, Karen Adelman MFA ’12 flew to Colombia to track down bullerengue.

A form of music and dance based in cumbia, bullerengue is a sort of call and response—a courtship ritual originally generated by the mingling of black slaves with indigenous women in colonial Colombia. Adelman used her $5,000 Neely Macomber Travel Prize—a competitive award for USC Roski students—to experience bullerengue firsthand. She returned to Los Angeles and last year presented her installation, La Bulla y Restos, which translates roughly to “the ruckus and remainders.”

Videos of life on the Colombian coast were projected in endless loops across the USC MFA Gallery walls, illuminating a gigantic sculpture knitted of mohair that hung in the center of the room. As the video’s soundtrack alternated between Spanish conversation and singing, Adelman’s live outbursts of song bounced off the walls, filling the space with the haunting echoes of bullerengue.

Adelman has a talent unusual among visual artists: She is a classically trained opera vocalist. From a young age, the New York native aspired to sing, from belting on a Broadway stage to crooning in jazz-blues clubs. As a child, she also was fascinated by crafts, particularly sewing, embroidery and knitting.

“I end up thinking about those material experiments I was engaging in as a child, working my way through materials to their final form,” Adelman says. “Most objects I make exist in this sculptural place. I also bring my performance work into some kind of integrated reality. I knew my work here would involve music and videos.”

During one of Adelman’s live performances, she paced under a spotlight with a large scroll in hand, synchronizing her vibrant singing with the sounds and voices in the videos. She sang in both English and Spanish, producing the fusion fundamental to bullerengue.

“The entire show is like a song,” Adelman says. “It has aspects that repeat, aspects that don’t. But in the end, there’s this sense of a story being told. And a sensory feeling about what happens.”

A strong advocate of live performance, Adelman has appeared in several other Los Angeles shows following her Macomber exhibition. She says her experimentation with integrating music, spoken word and the visual makes her art impossible to ignore.

“A way of making meaning is to attend to something very carefully,” she says. “One of the reasons I do these performances is that I can activate attention as one of the faculties we have. When there’s signification, there are feelings produced by it.”

ArtsMuseumsMusicRoski School of Art and Design