Trojans decorated horse-drawn buggies and later, automobiles, to welcome back alumni to campus.

USC Homecoming history got a late start. But when 1924 rolled around — more than 40 years after the first class graduated — the university was ready to welcome alumni with fanfare. The newly formed General Alumni Association (now known as the USC Alumni Association) led the festivities. Photos from USC’s first Homecoming show Trojans of all ages on parade, vying for the most clever and original theme in decorated horse-drawn floats, surreys and the occasional early automobile.

And, of course, there was football. USC’s first Homecoming matchup was against the Orange of Syracuse University, a game the Trojans won Dec. 6 by a score of 16-0 at the Los Angeles Memorial Coliseum.

Football remained constant throughout history. Yet, over the years, organizers introduced new features. The event began to feature a Homecoming queen and court, and celebrations across campus toasted alumni with food and drink. Horse-drawn floats gave way to 1930s grand touring cars and the zippy convertibles of the 40s and 50s. The elaborate themes went all out and included cars decked out to resemble pharaohs in an ancient Egyptian temple, flappers celebrating the anniversary of Charles Lindbergh’s solo flight and Ben-Hur-style gladiators in a painted chariot.

The parade would often wind through the Coliseum and down Wilshire Boulevard. In 1948, a parade of cars and floats escorted USC Homecoming queen Charlene Hardey to Los Angeles City Hall, where the mayor presented her the ceremonial key to the city.

By the end of the 70s, Homecoming events shifted away from student life to focus more on alumni. Returning Trojans still gather each year in Alumni Memorial Park before the football game to see old friends and make new ones. A weekend program of activities includes class-specific mixers, walking tours of campus and a welcome convocation. During this year’s Homecoming and Reunion Weekend, the USC Trojans will host Arizona on Oct. 19. It is scheduled to be the university’s first “Green Game,” highlighting zero-waste efforts. 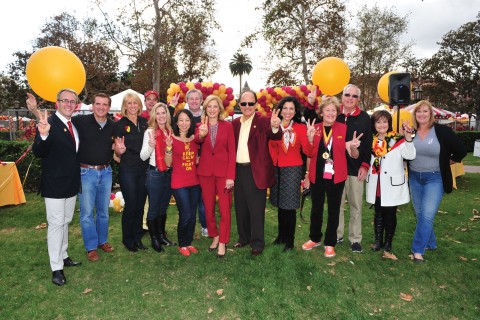 Reunion Weekend Brings Back Memories – and New Connections – for Alumni

In the wake of Reunion Weekend, two Trojans share their memories of USC. 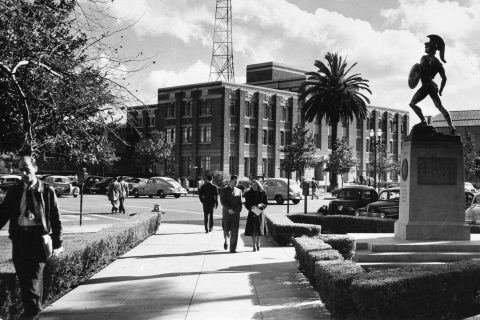 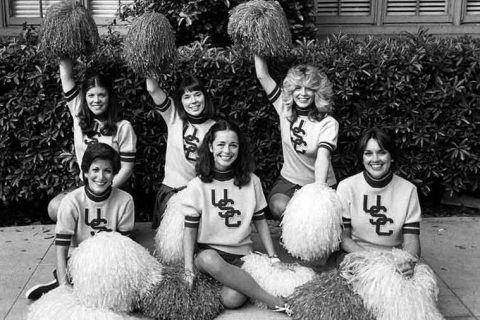 A surrey decorated for homecoming (Photo/USC University Archives) Dance On

For a half century, the Song Girls have crowds with school spirit and goodwill.