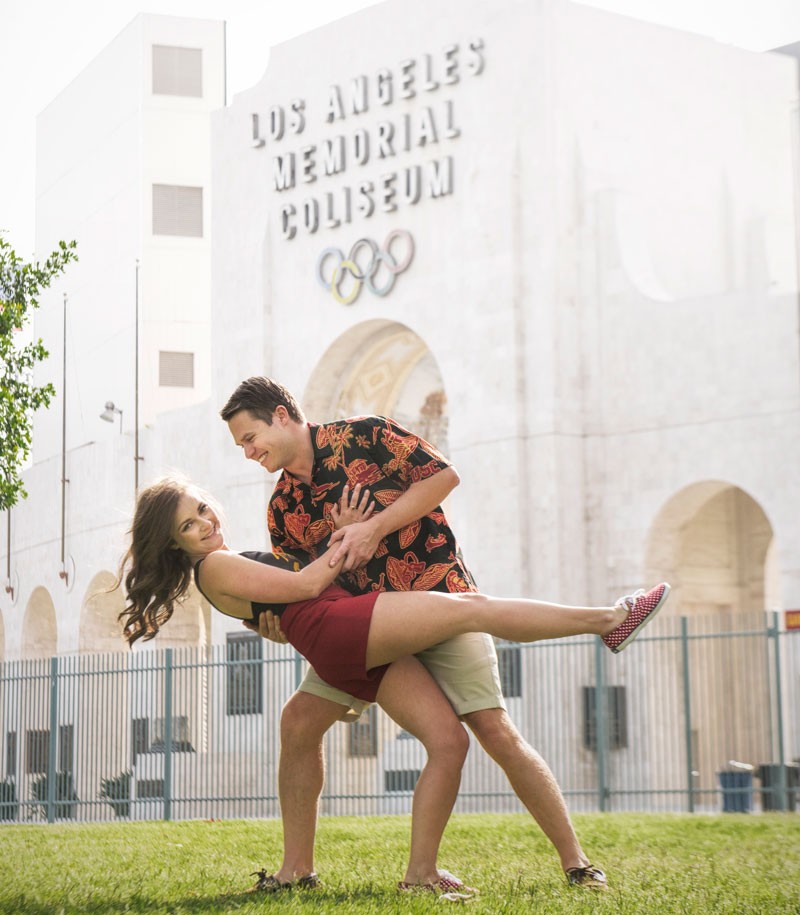 Readers write in with their most memorable moments on the field and off.

In the Spring 2016 issue of USC Trojan Family Magazine, we asked Trojans to share their favorite memories of the Coliseum. After 93 years, USC and the Coliseum have an incredibly rich, storied and legendary public history, but we know that sometimes the most meaningful moments are personal. Here are some of the stories that readers shared with us; enjoy them with a Coliseum dog and the Saturday-afternoon beverage of your choice.

LOVE ON THE SIDELINES

My fiance and I just took our engagement pictures at USC and had to stop at the Coliseum [image above]. Although we live in San Francisco, we have had season tickets since graduation and try to go to L.A. for all of the games. 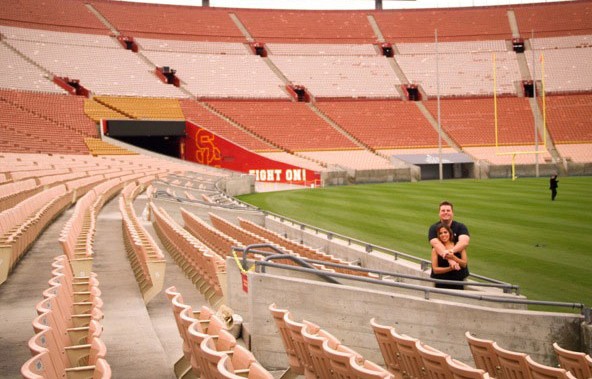 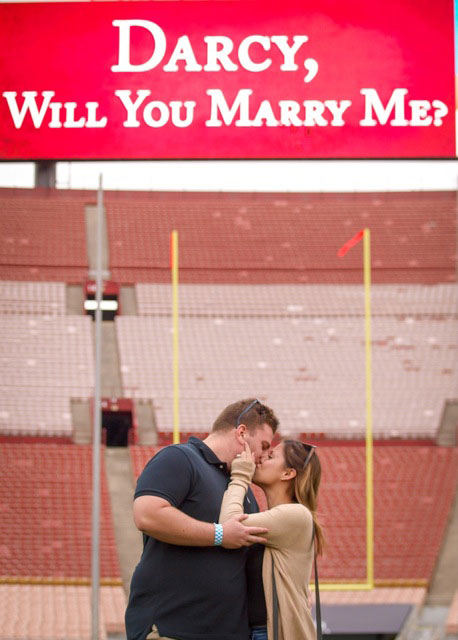 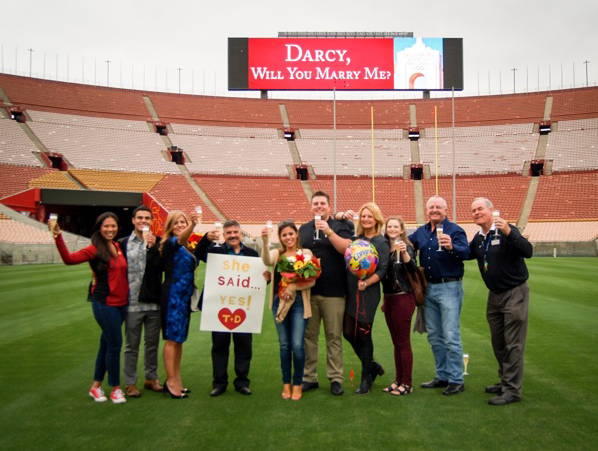 My name is Darcy Garcia and I was a part of USC’s class of 2012. I am the proudest Trojan to ever live. I live and breathe Cardinal & Gold. Since as long as I can remember, I have always talked about one day having the Trojan Marching Band at my wedding.

Well, my now fiancé knows my obsession with USC and he made the most perfect proposal happen. On the 50 yard line with both of our families watching from up top. He even flew my brother out (he attends the University of Hawaii).

Please enjoy the picture of our special moment. 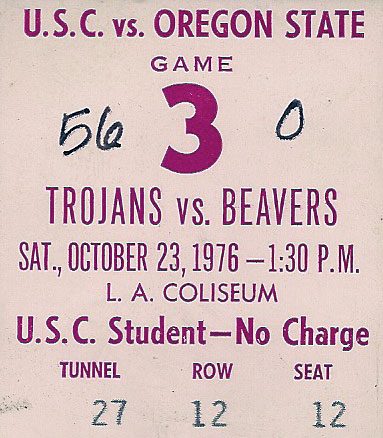 On October 23, 1976, I took my future wife on our first date to the USC/Oregon State football game at the Coliseum—don’t ask how I got her into the Trojan student section. I was part of two victories that day: the Trojans won handily 56-0 and I won her heart—we would remain together for the rest of my time at USC and we’d be married September 1980. 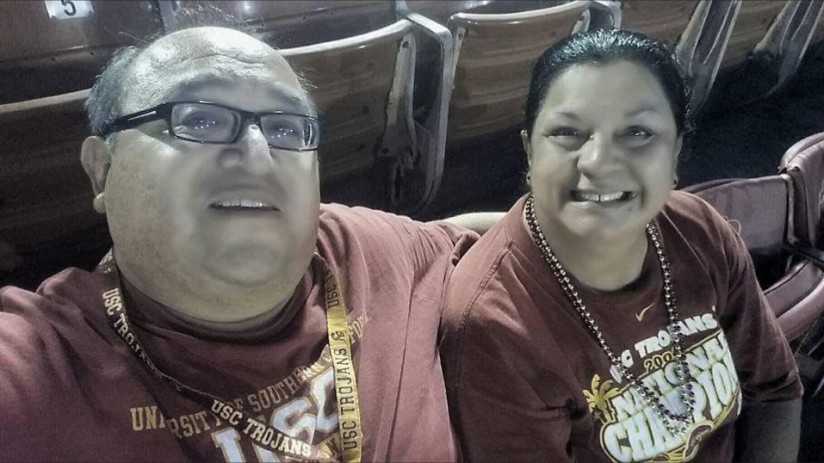 In September 2015, as part of our 35th wedding anniversary celebration, we enacted that first date by attending the season opener at the Coliseum (see attached photo), some 39 years after out first date. Sweet memories at the L.A. Coliseum!

In the fall of 1967, as an Amazon, I was the timer for half-time card stunts during USC’s football games in the Coliseum. It was just prior to half time that I met my husband, a Trojan Knight who was the card stunt designer. We both had to be down at the front of the stands to do our tasks. Using a timer, it was my job to tell the designated Knight announcer when to flip each card stunt, and Len went across the field to photograph the results so that he could check for any design errors. When he returned, he asked me if I would go to a party with him. He was desperately looking for a date since his friend insisted he bring someone. It was then that I met my Knight with whom I been married 48 years this coming June.

A nice young lady, Marie, was my date at the USC-Notre Dame game on Dec. 1, 1951. We had met only a few weeks earlier, but I was totally smitten with her. Later that month, we were driving  near the Coliseum, and on a whim, I parked at the 39th Street entrance facing the Peristyle, Christmas Tree Row. It was a crisp, cold night, the stars were very bright, and my heart was thumping, as it often did when I was with Marie. We both spoke openly of our newfound love for each other, and less than a year later, were married. Now, in the year 2016, we will celebrate our 64th year of marriage. We’ve been to many ’SC football games all these years, at the Coliseum and away. We can never forget that our life together began at that great Stadium, and created our special Coliseum memories!

In 1941, as a guest of Mr. Ralph Chick, general manager of the Coliseum, I attended an athletic event at the Coliseum. To my surprise, three Lockheed P-38 Lightening aircraft, the premium fighter aircraft of WWII with distinctive twin-boom silhouette, flew down from the peristyle  edge below the rim of the Coliseum and roared out the west end, to the delight of the crowd. Little did I know then that in a few years I would be flying a P-38 in the European theater and would return as a veteran, enrolling at USC on the GI Bill. While at USC, I ran track under Dean Cromwell and was a member of the 1949 national championship track team coached by Jess Hill.

In Summer of 1984, I was pursuing my Bachelor of Music degree at USC. I was in the university choir that was chosen to sing at the 1984 Summer Olympic Games in L.A. I remember singing the Star-Spangled Banner with a massive choir under the baton of none other than John Williams. The other music on the program also had a huge impact on me. The first music played that day was Copland’s Fanfare for the Common Man. Everyone was quiet when it started. And then the drums and the massive brass sections shook the Coliseum to the core. You didn’t just hear the music; you felt it! It was also the world premiere of John Williams’ Olympic Fanfare. Nowadays, we hear it as the lead music for all televised Olympic Games. But this was the first time it was played, and it was magical. 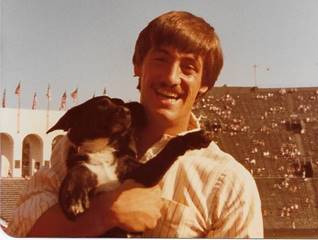 Walking across campus to the game against Minnesota on Sept. 22, 1979, I was shocked to run into Toto (named after the band), the homeless dog my Sigma Nu fraternity had adopted the year before.

He was thrilled to see a familiar face, so my friends and I took him with us, sneaking him into the game and keeping an improvised water dish full (not such an easy task in those days before omnipresent water bottles). This is a pic of Toto and me celebrating the 48-14 victory before we took him back to the fraternity house. George Tirebiter would have been proud!

Both of my parents are USC graduates from the 1940’s.  My dad (Frank B. Snyder) was a member of the football team for a couple of years in the early 40’s (this was interrupted by his enlistment in the Navy due to World War II).  By far my favorite memories of the Coliseum are the USC football games that I attended with my dad.  We were season ticket holders during the early 70’s (my junior high and high school years) and I will never forget the three Notre Dame games in 1970, 1972, and 1974.

1970 – I remember that Joe Theismann threw for over 500 yards (unheard of at that time) that day in a downpour but USC won the game anyway.

1972 – USC had an incredible team that year (national champions) and steamrolled Notre Dame as Anthony Davis scored six touchdowns in one of the most amazing individual performances ever.

1974 – This was quite simply one of the most incredible and enjoyable sporting events that I have attended in my entire life. The crowd absolutely erupted. USC scored seven second-half touchdowns to win the game 55-24. I have never heard (before or since) the Coliseum crowd as loud as it was for the second half of that game. I get goose bumps simply typing this paragraph even though it’s been more than 40 years!

Thanks for letting me share such a great memory!

I graduated in January, 1973 and as manager of the track team spent many Saturdays in the Coliseum for track meets (and football games, going back to 1956.) But my most vivid childhood memory was attending John F. Kennedy’s acceptance speech in the Coliseum, after his nomination at the 1960 Democratic Convention. I was only 9 at the time and don’t remember anything President Kennedy said. But I’ll never forget when his limousine came out of the tunnel and headed to the peristyle end and the speaker’s platform. As the car made its way down the south side of the field, several people hopped over the fence on the north side and broke across the field headed for the limo, hoping to shake Kennedy’s hand. Security guards gave chase. The stadium announcer started calling the chases just like a football game, “he’s at the 30, the 40, tackled at the 45 yard line!” Every time someone got tackled, we all cheered. 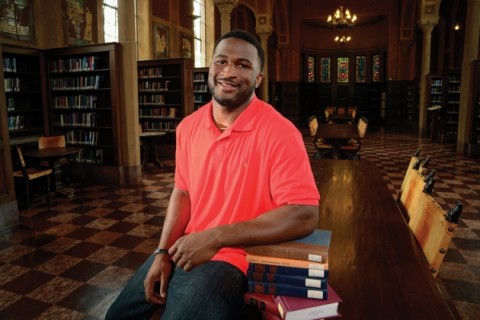