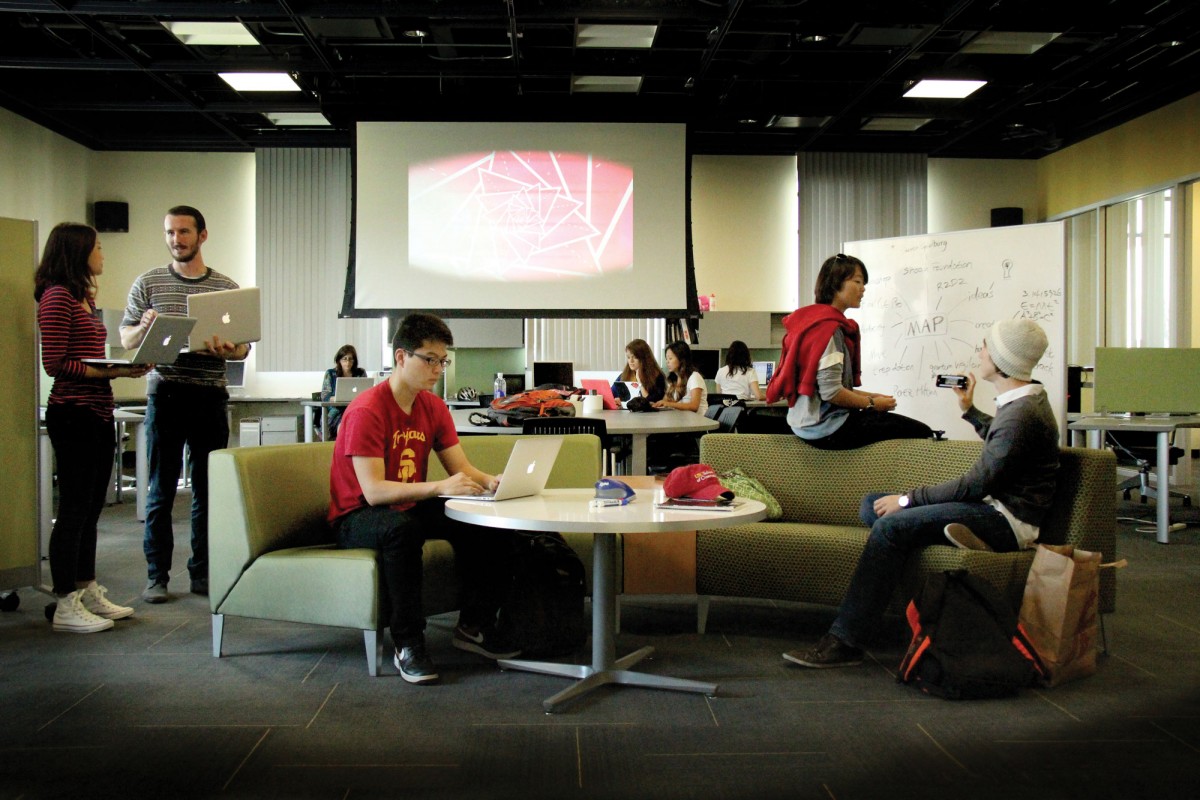 Scott Fisher strides purposefully up a wide staircase to the third floor of the new Interactive Media Building at the USC School of Cinematic Arts. Fisher and his research team know the building inside and out—from its more than 4,000 electronic sensors to its miles of fiber optic cable.

That’s because Fisher—professor, associate dean of research and director of the school’s Mobile and Environmental Media Lab—and his team worked with the architects from the earliest stages to develop the building’s unique feature: the ability to interact with its inhabitants and appear as a playful character. As Fisher walks through the building, he’s followed from one location to another by an “identicon” that appears on various screens. This identicon—an image generated by the building itself—remembers its previous interactions with visitors and uses these memories to give them personalized in- formation they might want to know.

Think of the brainy building’s technology as a more welcome take on HAL from Stanley Kubrick’s 2001: A Space Odyssey. A storytelling character, it can engage people walking within it through a Wi-Fi tracking system and mobile app. At any given moment, the building knows where you are and how much energy you’re using. It can suggest a special event you might want to attend. Today, the identicon tries to engage Fisher in play and prompts him to contribute a new photo to the building’s crowdsourced photostream.

“I’ve joked that the name should be ‘The Building for Very Cool Stuff,’” says Elizabeth Daley, dean of cinematic arts. “It’s the ultimate playground that lets people really try things and collaborate.” The school’s longtime mantra, she notes, is that the most important skill students will acquire here is the ability to cooperate. 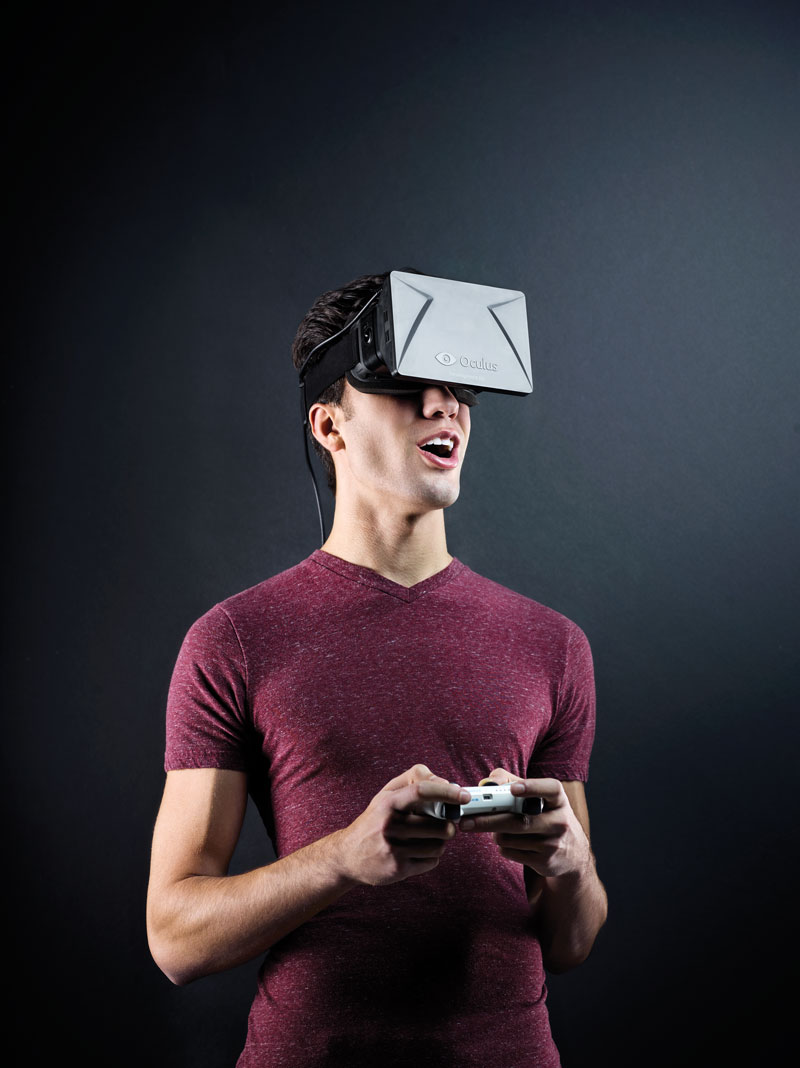 The need to share narratives is fundamental to our species, Daley explains. “People have always told stories interactively. We’re like herd animals—we like to interact with each other. This building will help to transform the way we tell our stories. It’s about narrative writ large.” Students and professors are already using the building to create new stories that will have an impact on an array of businesses and industries. They are creating programs that senior citizens can use to monitor their health; they are developing apps that will allow college students to live more sustainable lives; they are engaging underserved communities to help high school students make the transition to higher education.  For Tracy Fullerton, chair of the Interactive Media & Games Division, one of the facility’s strengths is how it fosters creative community.

“The culture in which media is made has a deep influence on how media is made,” Fullerton says. “The hope for the building is that we have a home for that culture.”

Before the Interactive Media Building opened in June 2013, programs in interactive media and games were spread out across the USC School of Cinematic Arts’ facilities. Now they inhabit a single, unifying space where students and professors can converge to work on the next iteration of technology-driven storytelling.

USC undergraduate and graduate students are already national leaders in game development. The 2014 edition of The Princeton Review ranked the university as the top game-design school in North America. USC’s graduate games program has been ranked No. 1 for five consecutive years; its undergraduate games program was ranked at the top for four out of those five. (These rankings are shared by the Interactive Media & Games Division and USC Viterbi School of Engineering’s Department of Computer Science.)

“Our students have gone out in the last 10 years to redefine what we think of when we think of games,” Fullerton says. Now they have an even better place to play and create.

It’s a big, open expanse that feels like an inviting downtown LA lounge—except it has the vibe of a tech startup where wunderkinds tote laptops and tablets everywhere. In this room, up-and-coming game developers kick back and relax one minute and have intense conversations the next. This isn’t your typical stodgy college classroom. These large, flexible spaces were designed for interaction and collaboration. The couches are curved and comfortable; the light, natural woods and vibrant reds, greens and yellow on the walls are fresh and inviting. As a group of students hashes out an idea for a game concept, an undergraduate working on a project in a neighboring pod overhears the banter. She pops her head up. “I have an idea for you guys,” she volunteers.

That’s exactly the kind of freewheeling discussion Fullerton envisioned as she worked with colleagues to develop the concept for the building.

Lab space devoted to game design has doubled at USC with the opening of the building, boosting faculty research.

On the third floor, colleagues across disciplines come together to advance their studies. One project already in development in the Creative Media & Behavioral Health Center targets people with spinal cord injuries, integrating shoulder exercises into a game in which players fly through sweeping, pre-Columbian South American landscapes. Another game suite under way named Collegeology—a collaboration between the Game In- novation Lab and USC Rossier School of Education’s Pullias Center for Higher Education—helps underserved high school students get accepted to college and prepare for university life. The games assist students with important skills from writing personal essays to navigating fnancial aid.

Fullerton points to a new lab dedicated to one of USC’s advanced game courses—Advanced Games Project 491. More than 100 undergraduates are registered in the popular course, and an equal number of students volunteer just to get the experience of being part of this ambitious endeavor. In a related class, project leaders develop a company and business model around the games created, readying them to be pitched to investors.

Walden, a Game is a good example. Fullerton’s game, which is still in development, simulates the experiment in simple living made by Henry David Toreau at Walden Pond in 1845-47. The game allows players to walk in the philosopher’s virtual footsteps, attend to the tasks of living a self-reliant existence, and cultivate their own thoughts and responses to the concepts discovered there. Another game spawned by the lab was Cloud, a popular, ethereal game by acclaimed designer Jenova Chen that centers on a hospitalized boy who dreams he can fly.

Inside the Interactive Media Building

The Game Innovation lab emphasizes cross-disciplinary applications in fields like policy and art. Across the hall, the Creative Media and Behavioral Health Center focuses on public health and medicine. The Mobile and Environmental Media Research Lab explores mobile storytelling in specific places, and the Fabrication Lab houses 3-D printers and technical tools.

Student Collaboration is core to the school’s interdisciplinary philosophy, and several shared seating areas are available on this floor. To encourage collaboration on a larger scale, a think-tank meeting room holds workspaces for groups.

The main entrance lobby is designed to showcase the latest faculty and student projects. A screening room offers four times the resolution of standard HD. A jury classroom has customizable workspaces and a seminar-style layout for multimedia presentations.

The “render farm” houses state-of-the-art server technology and 130 servers for rendering. Labs include one devoted to advanced game development, collaboration spaces with screens, and workstations big enough for advanced kinetic projects that require a lot of space.

The interactive media building has plenty of technological tools that will help in their game-design efforts. Fullerton points to new developments like Oculus Rift, a next-generation virtual reality headset designed for immersive games and education applications that has origins in the lab headed by immersive media expert Mark Bolas. This technology—once esoteric and limited to expensive prototypes for a small number of hardcore users—is becoming widely accessible, providing limitless possibilities for experiences that transport users into full-sized, three-dimensional worlds. But the possibilities don’t end with games. Fullerton cites the emerging field of “immersive journalism,” through which reporters will incorporate tools like Oculus Rift to bring their audience quite literally into the story.

“Game design is going in multiple directions,” Fullerton says. “It is moving just as strongly in virtual reality as it is in actual reality. Some technologies move us into our own minds, and some technologies are moving us into society and different worlds.”

The Interactive Media Building reaches beyond game designers and filmmakers: It draws students throughout USC who want to learn innovative ways to communicate ideas.

Holly Willis, chair of the School of Cinematic Arts’ newly created Media Arts + Practice Division, oversees a variety of degree and certificate programs as well as efforts to introduce new- media literacy skills across the university. The new facility will enable students to build important skills regardless of their Fields of study: How do you translate abstract ideas to tell a story visually? How do you make complex information come alive so people understand it?

Stale PowerPoint presentations will eventually vanish, Willis says. Instead, she envisions presentations on science, business, architecture, medicine and literature that resemble scenes from Steven Spielberg’s Minority Report. Alex McDowell, who helped design and develop the futuristic world of Spielberg’s 2002 thriller, is a professor who works with students across many of the school’s divisions. He and other interactive media experts will introduce USC students to the immersive power of technology.

The possibilities are endless, Willis says. Imagine a discussion about public health and urban demographics in which a speaker uses physical gestures to move through data sets to engage her audience. Imagine a virtual walk-through of a proposed architectural design in which the building shifts and seems to come alive. Imagine an immersive astronomy course where students fly through the universe to see new worlds.

The idea of exploring new worlds is essential to USC Provost and Senior Vice President for Academic Affairs Elizabeth Garrett. She toured the Interactive Media Building in the fall, and the building, on cue, greeted her by her first name and welcomed her to the future of a truly interactive world.

“The building will help us pursue one of the university’s mandates: to allow students to master many forms of interactive media to communicate effectively,” Garrett says. “In the future, these students will combine the knowledge and depth of a quality university education with collaborative and technical skills they can’t obtain anywhere else, to create realities we can’t even conceive of today.

“This is where the future will be created.” 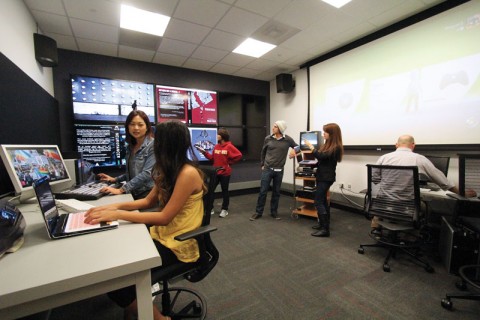 The groundbreaking lab at USC School of Cinematic Arts will test the latest virtual reality technology.