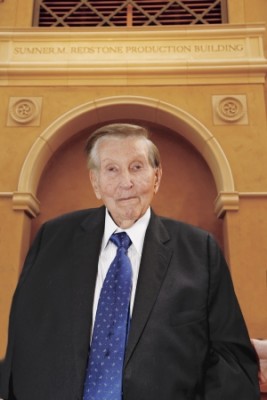 Expect to see “Filmed on Redstone 1” or “Filmed on Redstone 2” at the end of student film credits at film festivals in years to come. Already, young gaffers are setting up lights and aspiring directors are supervising crews on the two soundstages in the Sumner M. Redstone Production Building, which was recently named for the longtime entertainment industry executive.

Redstone’s $10 million naming gift to the USC School for Cinematic Arts supports production space and facilities used by about 1,000 USC students readying for their life’s work in film, television and news media.

“I’ve always said that content is king. It’s the lord of the realm. It’s the highest value in this industry,” Redstone told a crowd that gathered on Redstone Stage 2 for a dedication ceremony in February. “USC has been instrumental in celebrating the type of talent that exemplifies this, and it’s my sincere honor to be associated with this great school and to help to shape the future of this industry.”

The Redstone Production Building, which is already open, features 2,600 square feet of production space where students collaborate while learning key skills, such as staging, lighting, directing, producing, and forming and leading a crew.