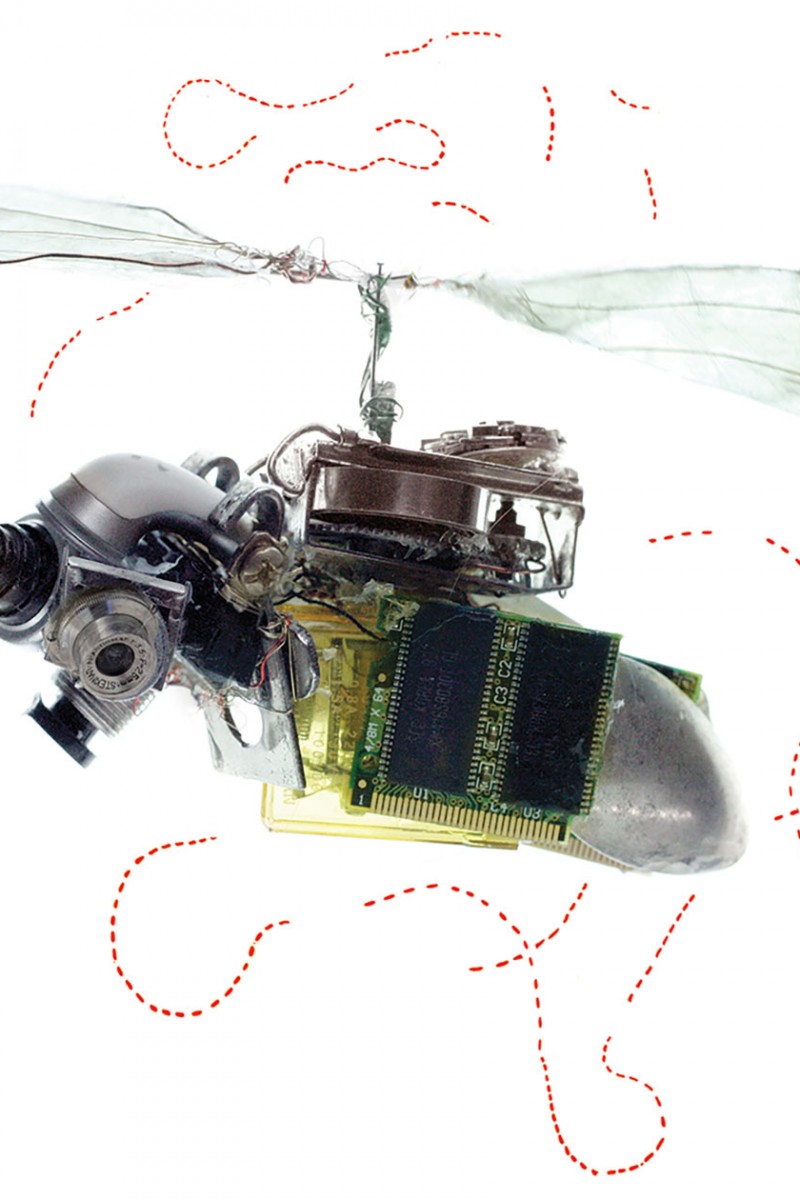 Picture a swarm of robotic bees—hundreds, maybe even thousands of them—whirring their gauzy wings as they hover and dart away, sensing the world around them through tiny cameras no larger than the head on a Lincoln penny.

This is Néstor Pérez-Arancibia’s dream. A young scientist in the field of biomimetics, Pérez-Arancibia joined USC in 2013 as an assistant professor in USC Viterbi School of Engineering’s aerospace and mechanical engineering department. He lost no time launching his Autonomous Microrobotics Systems Laboratory to expand on work he began as a postdoc on Harvard’s RoboBees project, which aims to artificially mimic the collective behavior and intelligence of a bee colony for scientific benefit.

Pérez-Arancibia’s dream of a robotic swarm may sound far-fetched, but according to the Chilean researcher, “everything looks extremely good” to make his dream a reality.

He has already built a feather-light, 5-millimeter-long camera that delivers 96-by-96-pixel resolution. And he’s closing in on a completely new technology for powering his micro-robots.

The scale may be tiny, but the sheer ambition and difficulty of Pérez-Arancibia’s project are monumental.

“What living creatures do effortlessly, robots must be programmed to do artificially,” he explains. This leads to a long list of engineering problems ranging from the aerodynamics of insect hovering to flight control. For the bees to be fully autonomous, they also need to be smart. To that end, Pérez-Arancibia, whose expertise is in control algorithms, plans to collaborate with Alice Parker, a USC Viterbi computer engineering professor, to create a minuscule “artificial brain.”

Then there’s the challenge of designing an ultra-lightweight power supply.

“If the robot weighs 60 milligrams and you have a payload of 50 milligrams, how do you put power inside? That problem has not been solved yet,” he says. Working with USC Viterbi colleague and former astronaut Paul Ronney, Pérez-Arancibia devised a way to get the same robot to fly for two hours, he says—at least in theory.

Perhaps the most daunting hurdle for Pérez-Arancibia is fabrication. “When developing a flying robot on the scale of a common housefly, all hardware must be developed from scratch,” he says. Nothing can be purchased off the shelf, and every piece must be painstakingly assembled under a microscope.

“The scale and complexity of the mechanical features require new ways to design and prototype,” he says.

And remember, he wants to build a swarm.

“If you want a colony, then you need communication between the robotic bees,” Pérez-Arancibia says. That means designing a tiny circuit to support inflight data transmission.

Far from discouraged, Pérez-Arancibia is excited by the hurdles. In the world of science, he says, “the more problems you have, the better—because every problem leads to students getting PhDs and publishing papers.”

Fewer than a dozen researchers are currently working on robotic insects, but Pérez-Arancibia has one big advantage: He can use MOSIS, the Multi-Project Wafer Integrated Circuit Fabrication Service, which is operated by USC’s Information Sciences Institute.

“This is one of the great things about USC,” he says. “At Harvard, you would have to go to a private company and pay them $500,000 to fabricate a circuit. MOSIS will do it for free or, if not free, way cheaper than half a million dollars.”

Cities are getting hotter, and that means dire consequences for our physical and mental well-being— more so for some. Trojan experts respond with community collaboration, climate curricula and cooling strategies. Music, Innovation