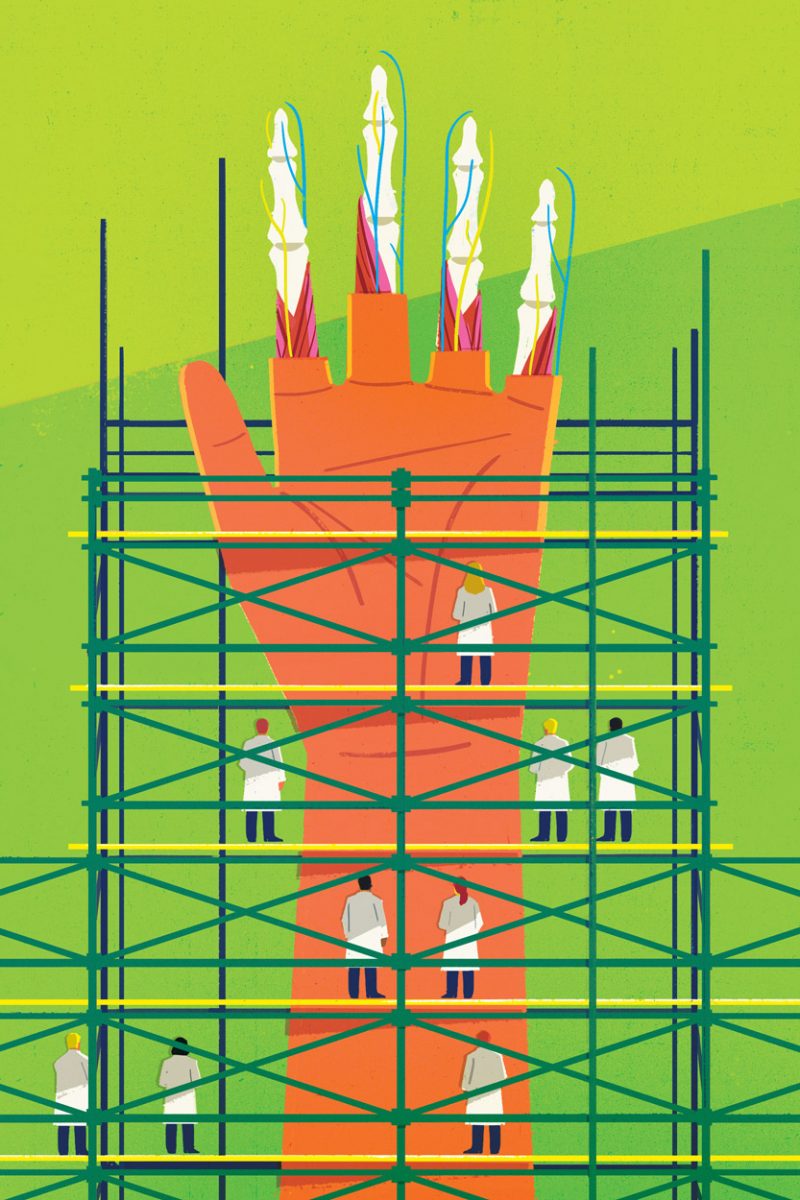 As a machinist, Jose Manzo uses his hands a lot. When he had a serious accident with a machine press at work—losing three fingers, a thumb and part of his palm—he feared the worst. He had no idea how doctors would ever restore function to his left hand.

Surgeons removed damaged bone and tissue and covered his wound with a skin graft, but the injury left the 33-year-old with only a pinky finger. “With just one finger, I wasn’t able to hold anything, not even a bar of soap or a glass of water,” Manzo says.

He was referred to Keck Medicine of USC microsurgeon Milan Stevanovic, who recommended a surprising solution: transferring the big toe of Manzo’s left foot to his left hand, where it could function like a thumb.

To improve the hand’s appearance, Stevanovic and his team replaced the skin graft with skin and blood vessels taken from Manzo’s thigh. Next, they improved the mobility of his pinky, so he could straighten and curve the finger. Finally, they transplanted the big toe from his left foot to replace his missing thumb.

Now Manzo can grasp objects as small as a needle between his pinky and his new thumb. His hand looks more natural, too. “Even though I had the surgery done not even two years ago,” he says, “people think my hand was like this since birth.”

Outcomes like Manzo’s were once merely a dream. But today, the field of microsurgery empowers doctors to save limbs, cover large wounds and reconstruct body areas damaged by trauma, burns or cancer. Microsurgery techniques also enable surgeons to restore form and function to those born with bone and muscle defects or missing toes and fingers.

“Fifty years ago it was unthinkable that we could put back a hand or a finger,” says Stevanovic, chief of the Hand Service in the Department of Orthopaedic Surgery at the Keck School of Medicine of USC, who is recognized worldwide for his expertise in treating injuries associated with the upper extremity (from the shoulder to the hand), including the nerves. “And no one thought of doing face transplants, which today is probably one of the most difficult and amazing feats that microsurgery can do.”

Despite patient demand and microsurgery’s dramatic results, microsurgeons remain in short supply. Members of the American Society for Reconstructive Microsurgery number only about 500. Compare that to, say, the American College of Cardiology, which boasts a membership of more than 52,000.

“There are more microsurgical cases than surgeons available to do them,” says Alex K. Wong, associate professor of surgery at the Keck School of Medicine and associate director of USC’s microsurgery fellowship program. “Certain communities don’t have access to these procedures because there are no microsurgeons, or their microsurgeons are already overloaded.”

That’s why the Keck School of Medicine is committed not only to practicing the discipline, but also to advancing the field. The surgeons perform research and teach microsurgical techniques to others —in the U.S. and abroad—to bring the benefits of microsurgery to more patients.

Microsurgery is a surgical technique that requires the use of a microscope and microsurgical instruments. These specialized microscopes provide up to 40 times magnification and the sutures used are five times thinner than a human hair. Microsurgery allows surgeons to transfer tissues—potentially a combination of skin, muscle and bone and associated nerves and blood vessels—from one area of a patient’s body to another. With this technique, microsurgeons can also repair blood vessels that are up to half a millimeter in diameter.

Some microsurgeons help patients after an emergency. As service chief of plastic and reconstructive surgery at LAC+ USC Medical Center and attending surgeon in the center’s burn unit, Joseph Carey MS ’02, MD ’02 applies his microsurgical skills to help trauma and burn patients.

“Gunshot wounds, accidents or any high-energy injury can remove or destroy soft tissue, bone or both, requiring the transfer of muscle and skin to cover the exposed area,” Carey says. “That’s often done in conjunction with orthopedic surgery, because healthy soft tissue is required to help heal the bones.” 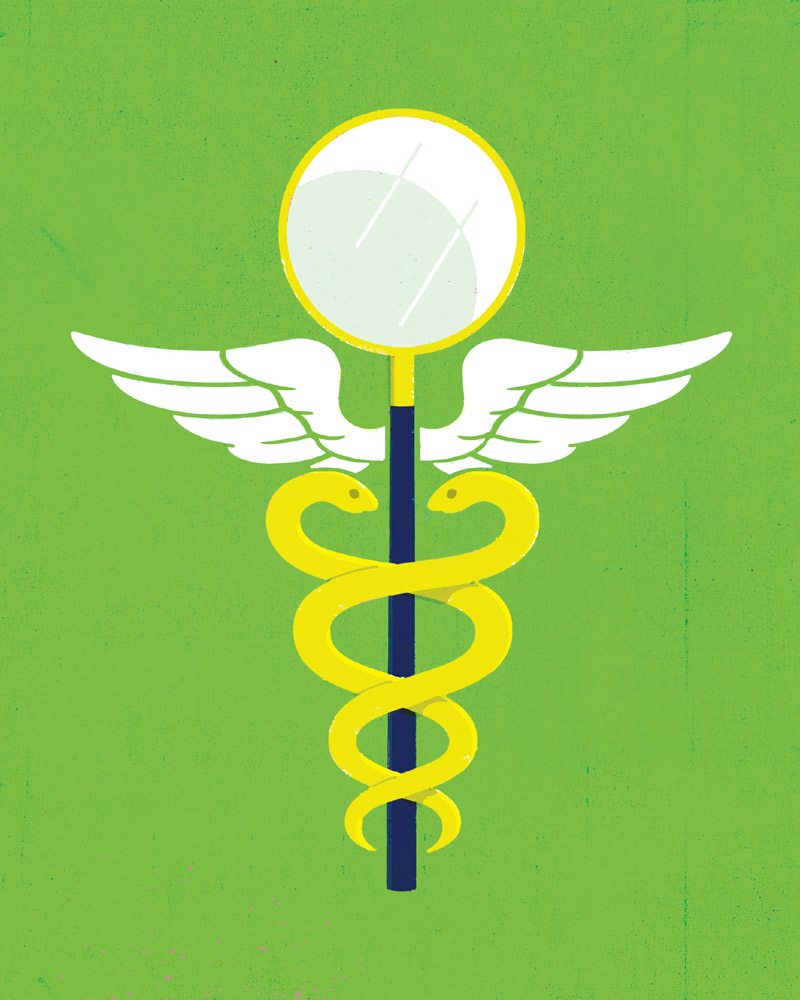 Severe burns, he says, present unique challenges. For example, Carey treated a 27-year-old woman who lost an arm, an ear and all of her scalp in a fiery vehicle crash. She also sustained burns over 65 percent of her body, leaving few options for harvesting tissue to use on her head. So Carey and his team created a flap, transferring skin and fatty tissue from her abdomen and connecting it to vessels in her neck to ensure that vital blood supply reached the cells.

The flap healed, and today the woman is married, has a child and lives free from the pain of a chronic open head wound.

Microsurgery also has a role in cancer treatment. When they remove a tumor, cancer surgeons usually have to remove some surrounding healthy tissue along with it. In the case of a soft tissue sarcoma that invades cartilage, muscle or bone in the legs, eradicating large tumors often means massive tissue loss that requires microsurgical treatment to prevent infection or to reconstruct the limb.

“These sarcomas go down to the bone, so when you remove the tumor, you create a large wound with exposed bone, critical vascular structure and nerves. Nothing short of a microsurgical flap can repair that,” says Wong, whose practice includes microsurgery to reconstruct cancer-related damage. “That’s why, historically, patients with these kinds of tumors used to get amputations.”

Microsurgery, he says, allows doctors to provide options that spare limbs. Breast cancer patients who choose reconstruction following a partial or full mastectomy also benefit from microsurgery. Instead of using implants, a microsurgeon can transfer fatty tissue from the patient’s abdomen, thigh or rear and use it to build a new breast. “We take skin, fat, an artery and a vein and build a breast that looks and feels like a normal one and lasts forever—unlike implants, which sometimes require additional surgeries in the future,” says Keck Medicine surgeon Ketan Patel, who performs these procedures.

TOOLS OF THE TRADE

SURGICAL MICROSCOPE
It can be positioned where needed and magnifies the surgical field up to 40 times. Sometimes microsurgeons wear special eyeglasses, called loupes, that magnify up to six times.
JEWELER’S FORCEPS
Held in the surgeon’s non-dominant hand, this tool is used to handle tissue and to tie sutures.
VESSEL DILATOR
A modified form of the jeweler’s forceps, this tool has a slender, non-tapered tip and is used to open and cut the ends of blood vessels.
DISSECTING SCISSORS
With a gently curved blade and rounded tips, these scissors are used to cut closely along a vessel without putting a hole in it.
SWAGED NEEDLE
A suture needle with no eye, this instrument may be as thin as a human hair.

To properly assess and treat breast cancer and other tumors, surgeons often must remove and evaluate lymph nodes, which serve as way stations for immune cells and lymph traveling through the body. Removing nodes can create fluid backup, just like a closed freeway section spurs traffic congestion. This results in lymphedema, a painful swelling and fluid buildup in the arms or legs.

Patel is one of a few dozen surgeons in the nation skilled in special techniques to treat the condition. These procedures— known by doctors as lymphovenous bypass and vascularized lymph node transfers—are considered “super microsurgery,” because lymphatic vessels are 10 times smaller than arteries and veins.

Lymphovenous bypass connects a lymph vessel to a nearby vein to reroute the fluid and relieve the congestion. Vascularized lymph node transfers relocate lymph nodes and blood vessels from one part of the body to another congested body area where they can help clear excess fluid.

“It’s like using a sump pump to fix a flooded basement. You place the pump where the fluid is, plug it into a power outlet and it pumps out the fluid,” Patel says. “We take the lymph nodes, place them in an area with excess fluid, and turn them on by reconnecting the artery and a vein. This allows the nodes to absorb the fluid and transmit it to the veins.”

Microsurgery is the cutting edge of reconstructive surgery and can be applied to many medical disciplines. No big institution should be without microsurgeons.

Patel hopes to replicate his expertise. He co-wrote and edited a guide that helps surgeons worldwide to incorporate lymphedema surgery into their practice. He also developed an algorithm that empowers surgeons and patients to collaborate when deciding which treatment option is best for their specific situation.

Wong, too, is helping to advance the field. His flap physiology research strives to improve our understanding of why dangerous blood clots sometimes form and destroy transferred tissue. Combined with his genetic research to find biomarkers that may identify at-risk patients sooner, he hopes to identify treatments to prevent transferred tissue from dying and improve success rates. About 3 to 6 percent of cases today involve these complications, he says, and surgeons want to lower that rate.

The Department of Orthopaedic Surgery at the Keck School of Medicine offers the year-long Joseph H. Boyes Hand Surgery Fellowship, which helps build the available pool of microsurgeons. Fellows gain experience in a variety of tissue transfers and reconstructions and are mentored by USC’s premier faculty and microsurgical staff. The program draws top talent, says Stevanovic, who directs the fellowship, the oldest of its kind in the nation.

The university also has a global impact by training surgeons from other countries and aid organizations in microsurgical techniques at USC and abroad.

Carey recently traveled to Tanzania to help teach more than 100 East African orthopedic surgeons basic tissue transfer skills needed to salvage injured limbs. The country’s dangerous roads, many traumatic injuries and lack of surgeons trained in microsurgical skills made amputations so common, he says, that amputees could be found on nearly every street corner.

“Surgeons in resource-poor environments have the same, if not better, talent as surgeons anywhere, but they are limited by available resources and techniques,” Carey says. Learning the techniques enables these surgeons to save more limbs, potentially saving patients’ livelihoods.

Click below to watch a documentary video on Joseph Carey’s trip to Tanzania and the first flap course held for East African surgeons.

Procedures impossible today because of limits in human eyesight and dexterity might become available in the future, thanks to surgical robots. And figuring out how to better suppress the immune system and encourage the body to accept grafted tissue may allow surgeons to use more tissue from deceased donors rather than flaps from patients. It’s also possible that future surgeons will grow the tissue they need for transplantation.

“A group in China recently made an ear out of cartilage, grew it on the patient’s forearm and then transplanted it to his head. If we can create new organs on people and then transplant them, we wouldn’t have the long-term effects of immunosuppression,” Wong says.

The number of microsurgeons worldwide will likely grow along with technology, as well. “Microsurgery is the cutting edge of reconstructive surgery and can be applied to many medical disciplines,” Stevanovic says. “No big institution should be without microsurgeons.”

Artists send uplifting tunes that provide moments of relief during the pandemic — and you can watch and hear some of them on video here.

You Know Sugar is Bad for Your Kids. Here’s What You Can Do