Meet the 2015 President of the USCAA Board of Governors

Michael Adler ’86, MBA ’92 takes the helm of the USC Alumni Association’s governing board. 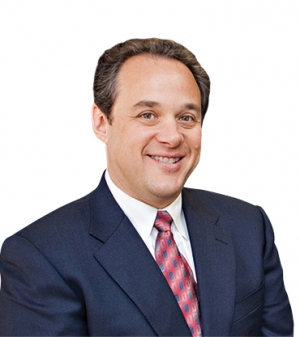 Michael Adler ’86, MBA ’92 remembers the first time he heard of USC: his high school’s “college night.” The sounds of the Trojan Marching Band filled a school hallway as band members paraded down the corridor.

Adler followed the band—and he’s answered the USC call ever since. Not only did he go on to earn two degrees at USC, but he also took on the roles of ardent fan, Trojan leader and now president of the USC Alumni Association (USCAA) Board of Governors. For Adler, it’s the highlight of his 33-year relationship with the university.

Adler grew up in LA’s Woodland Hills neighborhood, and family finances were tight. He started working at age 8, selling Amway products door to door and landing jobs at a hobby shop and arcade after school. Finances should have made USC out of the question, but the university offered scholarships and financial aid that covered tuition.

At USC, Adler juggled a full course load with his full-time job at McDonald’s. He also joined the business fraternity Delta Sigma Pi, where he served as chancellor and president. He didn’t have much opportunity to socialize on campus, but Jill—a McDonald’s co-worker who became his first girlfriend and the reason he attended USC rather than going out of state—insisted that Adler take her to a Trojan football game.

Jill didn’t attend USC, but she knew football. “We sat in the very top row, and she had to explain what was going on,” Adler remembers. By his second game, he was hooked. “For more than 20 years, I’ve attended every home and away game.”

Not that he’s had a lot of free time. In 1983, Adler started working four hours a week collecting interest rate information for a bank consultant to supplement his full-time McDonald’s job. Thirty-two years later, he’s the president and managing director of what’s now known as Informa Research Services, which gathers competitive financial intelligence. At home, he and Jill just celebrated their 25th wedding anniversary and have a 17-year-old son, Grayson, who hopes to be a future Trojan.

Adler’s path to USCAA leadership grew out of a class project for his MBA program. “My final project was an operational audit of the USCAA Board of Governors,” he says. Impressed with his work, the board asked Adler to join. After serving a two-year term in the 1990s, he returned in 2007 and worked his way to the top spot.

As newly elected president of the USCAA Board of Governors, he has two big goals: helping USC stay accessible to all students and increasing the value of USC diplomas.

To meet these goals, Adler hopes to boost USC’s alumni participation rate—the number of alumni with undergraduate degrees who donate to USC—which is a factor in national rankings. Explains Adler: “We are at 41 percent, which is the best in the Pac-12. But if we increase that, it will strengthen our rankings, and the value of our degrees goes up.”

His own continuing financial support grew out of a seed planted his freshman year, when he saw a list of donors’ names in Hoffman Hall. He recalls thinking, “Someday, if things go the way I hope, I want to give back so others will have the opportunity USC provided me.” He started small, splitting the Trojan Athletic Fund’s Cardinal & Gold junior membership with friend Chuck Miwa ’87, MBA ’00 because half was all he could afford at the time.

Looking ahead, Adler is excited about USCAA’s role in launching a new university-wide program, Day of SCupport, which will especially emphasize reconnecting with undergraduate alumni. He has no doubt that USC’s numbers will continue climbing “if we all work together to support our Trojan Family.”

Meet the 2015 President of the USCAA Board of Governors