Half Century Trojans Jim and Mary Manos share their love for all things USC.

MARY MONOS ’58, née Kotsikos, was only 13 years old when she fell for Jim Manos ’54, MS ’57, EdD ’72 and his head of black curls. Mary was in eighth grade, and Jim was already an upper-classman at Los Angeles’ Dorsey High School. One look at Jim rendered her speechless, and he still remembers that day, too.

“She was wearing a poodle skirt and rolled-down bobby socks,” Jim says. 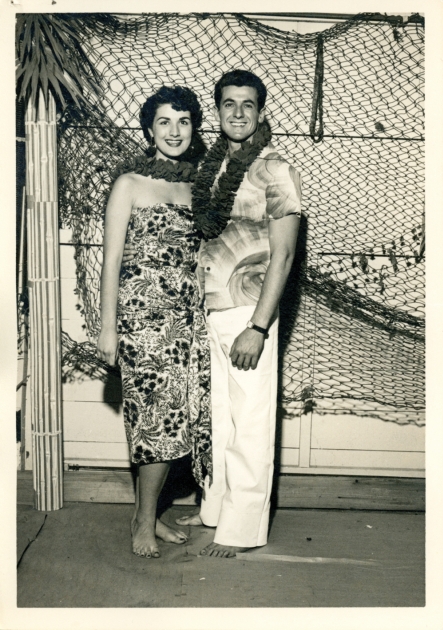 Love would have to wait a few years, though. The pair only started dating during Mary’s freshman year at USC, and two weeks after she graduated, they got married. As the first university-goers in their families of “died-in-the-wool Greeks,” as Jim puts it, they took up careers in education in Los Angeles: Mary as a teacher and principal, and Jim as a professor. They raised their children, Tony Manos ’83 and Cathie Manos ’84, as much Trojan as Greek. For the young ones, when college time neared, any university other than USC was not an option. As the children told their parents, “No, you’ve already done it. We’re Trojans.”

Jim, Mary and their family continue to be active as alumni, and attend many Trojan events where they include their grandchildren, Jimmy and Nicholas Parker. The Manoses wear golden lapel pins that identify them as Half Century Trojans, USC alumni who earned their bachelor’s degrees at least 50 years ago. “Isn’t that perfect?” she says, pointing to the group’s motto—Still Fighting On!—on her pin. She serves as the organization’s corresponding secretary, while Jim is an adviser to the board. Says Jim: “You come to USC and you can’t help but be included and involved.”

Of all the USC events the Manoses attend regularly, including the annual USC Alumni Awards dinner and the Half Century Trojans Going Back to College Day, graduation may be their favorite. Leading the parade with their age group, they can hear the announcer introduce them as 50-plus-year graduates, prompting young students to applaud.

Jim and Mary chuckle as they interpret the students’ cheers as disbelief: Could these people really have graduated 50 years ago? Are they still alive? You bet, the Manoses say.

Somewhere along the way, Mary saw Jim’s dark curls turn gray, then white. But the energy of their dating days is still there. “We laugh a lot,” Mary says.

Jim’s reply? “We better—and we are still fighting on.”

To learn about Half Century Trojans go to alumni.usc.edu/groups and click on “Generational Groups.”