Physician-scientist Berislav Zlokovic searches for better treatments for dementia with a drive to make a difference now.

by By Katherine Gammon
Winter 2013

Berislav Zlokovic’s office at USC’s Zilkha Neurogenetic Institute is a jumble, stuffed with pictures of singers and musicians and diplomas written in Cyrillic script. A small waterfall burbles down a wall and gurgles steadily, punctuated every so often by Zlokovic’s avuncular chuckle. He’s a man quick to smile. On this day, he’s nursing a shoulder injury that happened while playing volleyball with “guys who were much younger and faster,” he says with a laugh.

Zlokovic is more than the charismatic character known as “Betza” to friends and colleagues. He’s committed to whatever he puts his mind to, whether it’s music, barbecue or science. And when it comes to science, he’s drawn to problems that matter to a great many. He’s changing the way modern medicine studies and treats Alzheimer’s disease and other conditions that cause dementia.

Across the globe, about 35.6 million people have dementia—and that number is expected to double within 20 years. There’s no known cure for dementia, but Zlokovic is working on it.

While studying the vascular system as a research fellow in London in the 1980s, cognitive disorders piqued Zlokovic’s interest. He had personal reasons: His grandmother had a form of dementia. Maybe, he thought, blood vessels in the brain might play a part in the syndrome.

Many researchers studying Alzheimer’s disease focus on the tangles of proteins in the brains of people affected by the disease, but Zlokovic takes a different approach. He was the first to propose that impaired blood flow and flaws in what’s called the blood-brain barrier drive neurodegeneration, which underlies all kinds of cognitive disorders, from Parkinson’s to Alzheimer’s. “We began to see Alzheimer’s not as a disease of overproduction of proteins in the brain, but a lack of clearing out those proteins—and the blood vessels take an active role in the clearing process,” he explains.

His work has shown that declining memory and thinking is only a secondary symptom in people with dementia. The first signal that something is awry happens in the blood vessels, he says. By targeting the vascular system and keeping its shortcomings from damaging important nervous system cells called neurons, he believes that dementia could be halted or prevented.

Zlokovic studies the function of brain pericytes—cells that scientists have known about for more than a century, but whose purpose was unclear. He found that pericytes control key neurovascular functions, basically acting as guards for the blood-brain barrier. This barrier keeps potentially dangerous foreign substances from moving from blood vessels into brain tissue and maintains a constant environment for the brain. If pericytes start to break down, the brain ultimately suffers.

In research published two years ago while Zlokovic was working at the University of Rochester in New York, his team found that when they reduced the number of working pericytes in the brains of mice, the effects included reduced blood flow, greater exposure of brain tissue to toxic substances, impaired learning and memory, and damage to neurons—all phenomena that are likely to happen to people as they age.

A year later, the team showed that a gene linked to late-onset Alzheimer’s disease called ApoE4 appears to cause harmful levels of an inflammatory protein to accumulate in pericytes, which in turn causes blood vessels in the brain to become leaky.

Zlokovic’s work has had a huge influence on the field of neurodegenerative disorders, says former student Robert Bell, now a principal scientist and lab head at Pfizer’s neuroscience research unit in Cambridge, Mass. “He’s done it in the face of people who take a more neurocentric approach, and it hasn’t been an easy path to carve out,” says Bell, who studied with Zlokovic in Rochester. “Betza stuck with it, and now most neuroscientists agree that understanding the neurovasculature is essential to developing treatments.”

Some of those treatments may come from Zlokovic’s own lab. Using transgenic mice and studying human brains post-mortem, Zlokovic’s team at the Keck School of Medicine of USC’s Zilkha Neurogenetic Institute is now looking at ways to harness the power of pericytes to help patients. “What we’d really like is to detect early changes in the vascular system that predispose people to loss of cognitive function. If we can start detecting changes in someone who is 40, the declines don’t start happening for another two decades, giving a lot of time for treatments,” Zlokovic says.

Scientists have already applied his research to therapies. Zlokovic is listed as an inventor on 14 patents. He’s founded three biotech companies, and his discoveries have contributed to the development of clinical trials for Alzheimer’s disease and stroke.

Zlokovic’s research on the connection between blood flow and brain health has led him to a surprising conclusion: Brains could function for much longer than the average human life, if only the vascular system would stay in shape. “Our brains have the capability to live 150 years if the vascular system could keep up. Heart disease or heart attack, known as infarction, isn’t disease of heart muscle. It’s a disease of vessels in the heart—coronary vessels,” he explains. “The brain was never exceptional in the body—it’s only as strong as the weakest links.”

For Zlokovic, the passion for discovery pushes him onward. His next frontier: finding markers that could predict the onset of Alzheimer’s disease 10 to 15 years before symptoms arise. His research group is trying to identify such biomarkers in people who are cognitively normal today but who may develop Alzheimer’s later in life. The earlier patients can get treatment, the better the chances of slowing down the progression of the disease, Zlokovic says.

“We are searching for biomarkers in brain fluids, particularly cerebrospinal fluid, and blood, or imaging markers in the brain, in individuals at risk for Alzheimer’s and in models of Alzheimer’s and neurodegeneration that will tell us about leaky blood vessels and early damage of the brain’s vascular system and its impact on the brain,” he says. “We believe that sealing damaged vessels would allow the brain to self-repair and re-establish its normal functions.

“This is why I’m so excited about what we’re doing at USC, working with colleagues from so many different departments to reduce the gap between experimental and clinical findings. That process has already started.”

Learn more about dementia research from Berislav Zlokovic on YouTube. 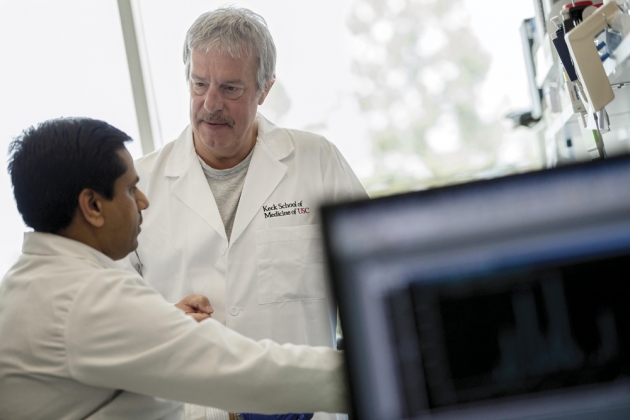