Messages of Hope and Determination in Alum’s Film Miss Juneteenth

Channing Godfrey Peoples MFA ’11 talks about the responsibility borne by Black artists, storytellers and creators today and the power of speaking your truth.

To fight for a better future, it is always important to remember the past.

That adage is at the heart of Miss Juneteenth, the debut feature of Channing Godfrey Peoples, who earned her MFA at the USC School of Cinematic Arts in 2011. She wrote, directed and filmed the mother-daughter drama in her native Texas. It premiered at the Sundance Film Festival in January and is being released widely on Juneteenth, the holiday commemorating June 19, 1865, when slaves in Texas finally achieved their freedom. 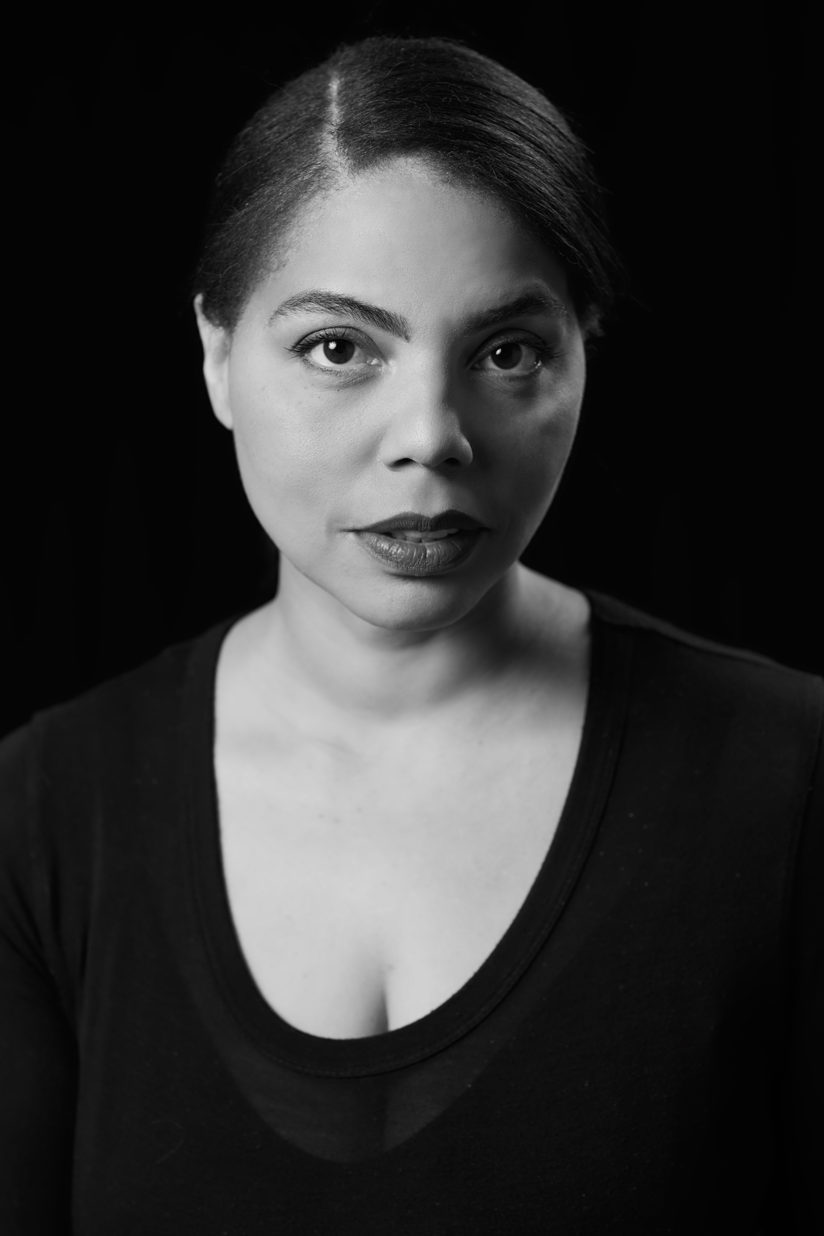 The film traces the story of Turquoise Jones, a single mom whose life didn’t follow the path she expected when she won the Miss Juneteenth pageant as a teenager. Now she’s pushing her own teenage daughter, Kai, to earn the title and create a brighter future for herself.

Godfrey Peoples spoke with USC Trojan Family about the inspiration behind her film and its message of hope during the ongoing fight against racism.

What did you enjoy about Juneteenth growing up in Fort Worth, Texas?

There was so much excitement around coming together as a community. I remember the parade and blues music and barbeque and people dancing. There would be a sweet potato pie cooking contest or a cane fishing pole contest. People would come together to connect. I realize now that my childhood excitement about this day was really about us being able to commemorate our ancestors, who found out they were free 2 1/2 years after everyone else.

What was your inspiration for creating Miss Juneteenth?

The centerpiece of Juneteenth is the Miss Juneteenth pageant. I know now as an adult that I was really inspired by that because I got to spend time at this scholastic beauty pageant with all these young, beautiful African American women on stage. I got to see them gliding across stage with all this beauty and talent and intelligence. But what was most formative was getting to see young Black women with hope on their face. That has translated to the film in its hopefulness.

How do you view your personal nostalgia in the context of our country’s past with slavery and the current movement for racial justice?

It’s a bittersweet moment for me as an African American in this country, especially with all of the tragedies that have been happening. Black folks have been having these conversations about these tragedies that keep happening over and over again, and I think we’re in a moment where people are actually listening to Black voices and amplifying Black voices. I hope that continues. I’m happy we have this story that is able to contribute to the conversation and is navigating some of those themes we’re talking about today: What does freedom mean for Black people?

Talk with the Creators

How do you view the role of Black creators in raising awareness about issues like slavery or racism, especially now when there seems to be a big appetite to learn and understand?

For me, I do feel a sense of responsibility to tell our story, but more so because it’s what makes me excited and want to get out of bed in the morning. I love Black people, and that translates to my work. More than anything, as an artist, we have a responsibility to tell the truth, whatever that truth is for us. And this is my particular truth.

My journey to cinema really started with community theater. I grew up in Fort Worth, Texas, which is a big city, but I really grew up in a historically Black neighborhood and it felt like a small town. Everyone knew each other. I remember having access to a small community theater called Sojourner Truth. I would see these plays put up, these great works like Purlie and for colored girls [who have considered suicide / when the rainbow is enuf]. It really got me interested in storytelling. Then I became interested in literature and would read the greats like Toni Morrison and Alice Walker and Dr. Maya Angelou. Their work was so cinematic, I could see the pictures in my head. And I was always writing poems and short stories and little plays myself.

What drew you to the USC School of Cinematic Arts?

Early on, I always said I wanted to be an actor. I went out to California to audition and coincidentally got cast in some USC student films. I got so interested in what was happening behind the camera. I applied to USC and gratefully got in. I had never really picked up a camera, but I had those stories in my heart. I’m really grateful to the USC School of Cinematic Arts because I feel like I got the structure to bring those stories to screen.

You met your husband, Neil Creque Williams MFA ’13, who is a producer on Miss Juneteenth, at USC. What kinds of projects did you work on together back then?

I got more from USC than just a cinema education. I got a fantastic husband. Initially, Neil and I started working together because he is from North Carolina and I’m from Texas. We both discovered we were creating these Black Southern stories that highlighted these historical moments in time or culture. We started working together on my thesis film that I shot here in Fort Worth, Texas, called Red. Then I went on to produce a fantastic film he did about a jazz musician with epilepsy called David’s Reverie, which we shot in Los Angeles. We later went on to create another short film called Doretha’s Blues. We kind of go back and forth with the directing and producing hats, because we’re each other’s trusted partner.

How does it feel to be part of the legacy of Black filmmakers from USC like John Singleton, Shonda Rhimes and Forest Whitaker?

When you talk about John Singleton’s work, one of the things that his approach emphasized was authenticity, and that’s something I absolutely believe in — being able to tell my stories authentically. I do feel a sense of responsibility as a Black artist, and I also feel a sense of excitement about having gone to USC in particular. I feel proud of my education and I learned so much. I had professors there who were supportive of me in writing and directing. I’m such a determined person, like our lead character, Turquoise, and that’s something I learned from my upbringing and family and the women surrounding me. I feel like I would have found my way here anyway, but USC gave me this structure in which to tell these stories.

How did it feel to win the Louis Black “Lone Star” Award, given by the SXSW Film Festival to a film primarily shot in Texas?

That’s another bittersweet moment, when SXSW got canceled because of COVID. You dream about playing at Sundance, you dream about playing at SXSW. I really wanted to play there, but I think they did the right thing. What I love is that they still pushed forward, and we were able to win this really prestigious award. I wrote this film in a way that was accessible for us to shoot it, because we didn’t know if we’d have a financier behind it. All these magical things have happened along the way. I couldn’t be more grateful because I was telling a story about a Black woman with a dream deferred and she just wants something for herself. That’s not a story that is often told. I was telling a story I really wanted to be in the world, and especially about a world I grew up in that is not often seen.

What do you hope people who watch the film come away with?

Where can people see the film?

It’s on video on demand and digital on June 19 everywhere. I think what’s really special in this moment is how the virtual cinemas have embraced the film. I’m asking people to support these virtual cinemas because they are the ones that have kept independent film alive. 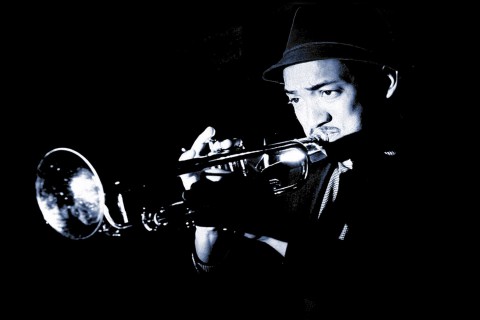 The thesis film spotlights a jazz trumpeter grappling with epilepsy. 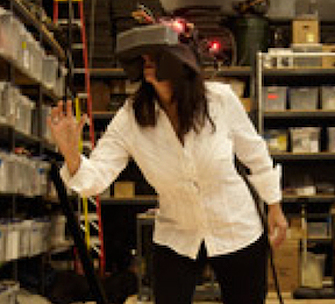 ‘Hunger in LA’ makes its mark at Sundance

In Nonny de la Peña’s immersive journalism piece “Hunger in Los Angeles,” the participants experience a dramatic incident at a local food bank, where a man collapses in line while awaiting his turn. 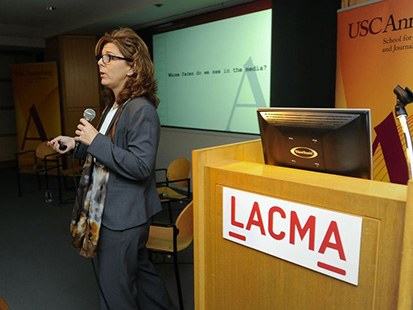 ‘Little has changed’ for minorities in film and TV

Following a trio of data-filled presentations that examined the paucity of minorities in key roles and positions inside the film and television industries, communication professor Stacy Smith posed a question to filmmaker Ava DuVernay at a panel discussion held in late March.

Messages of Hope and Determination in Alum’s Film Miss Juneteenth