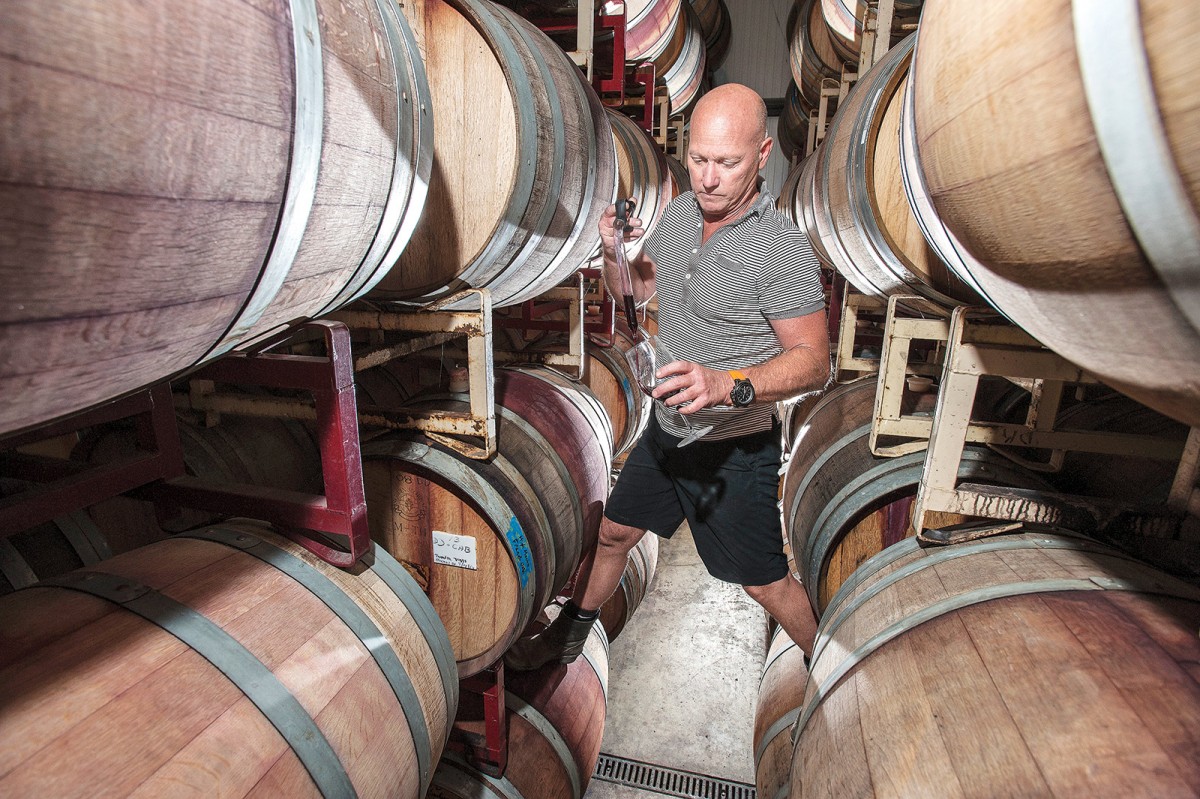 A Dentist Pursues His Passion for Winemaking

A Trojan tackles owning and operating a winery — all without quitting his day job.

When not tending to teeth in his Newport Beach dental office, Doug Hauck ’81 turns his attention to something quite different: grapes. For the past eight years, Hauck and his wife, Kim, have owned and operated HammerSky Vineyards and Inn on 50 acres of rolling land in Paso Robles, California.

What made the dentist expand from gumlines to grape vines?

“I always enjoyed a good glass of wine, and I have a palate,” Hauck says. Like many Californians, he and his wife had mused about the romance of owning a winery. Unlike others, however, they actually bought one.

A self-proclaimed “nonstop creative guy,” Hauck studied economics at the USC Dornsife College of Letters, Arts and Sciences and was a member of USC’s ski team and Beta Theta Pi fraternity. After graduation, he forayed into jobs ranging from film production to house flipping. In the end, he decided to follow in his family’s health care footsteps and completed dental school at the University of the Pacific in San Francisco.

But even when running his dental practice, Hauck found time to teach at the Herman Ostrow School of Dentistry of USC and even coached the ski team for a few years.

When he decided to try his hand at winemaking, it took him 10 years to find the perfect spot—four hours north of his home in Orange County. Besides a vineyard and tasting room, the property includes a 112-year-old inn.

“HammerSky is estate-grown, single-block, single-vineyard only,” Hauck says. “That means we only get grapes from our place. It gives our wine a certain flavor. We’re Bordeaux-centric; we do Cabernets, Merlots, Petit Verdots and Zinfandels. Personally I love the Cabernets, that’s my thing.”

Their estate wines have received impressive ratings—93s and 94s on a hundred-point scale—in major publications like Wine Spectator and Wine Enthusiast.

Of course, most dreams don’t come to fruition without a lot of hard work.

“[When I bought the property] I didn’t realize the business was really five jobs,” Hauck said. “There’s the winemaking, the growing, selling the wine onsite and to restaurants, running the inn and doing events. It’s a lot of moving parts.”

For Hauck, it’s a labor of love. “It took me several years to rebuild the place, but now when we’re there doing a wedding or see the property on TV, it definitely has a certain spirit and visual pop. And when you’re standing there watching a group of people enjoying it, it’s like ‘wow.’ That’s the kind of investment return you don’t get back from a stock or bond.”

Hauck still makes time for fun, and he loves following USC sports and staying in touch with college buddies. His Beta Theta Pi fraternity brothers have planned a reunion at HammerSky this spring.

“We still get together—that was a great bond, a great network of friends. ’SC is where my heart is.”

Niki Kawakami – "Us being here today, it’s a very reflective time. I used to share a lot of stories and I think that’s something that should be emphasized more, that connecting with your history, learning from the lessons and seeing how you can be better." (Photo/Damon Casarez) LGBTQ+ voice actor animation

A Dentist Pursues His Passion for Winemaking