If there’s one thing Juanita Mills Feeder ’32 has learned over her 106 years, it’s getting creative when someone tells her “no.”

Take her college days, for example.

As an Alpha Gamma Delta pledge at USC, Feeder was required to spend Monday nights at the sorority house. That’s when shenanigans tended to happen. “We had a system in place,” Feeder remembers. “One of the sorority sisters would sleep with a string tied around her toe. Those of us who snuck out would tug on it to be let back in without waking up our housemother.”

Feeder is one of three Half Century Trojans—alumni who graduated 50 or more years ago—who recently spoke with USC Trojan Family Magazine about college life. Beyond being steadfast Trojan football fans, the trio all are more than 100 years old. So what was campus like back in the day? They’ve all got stories. 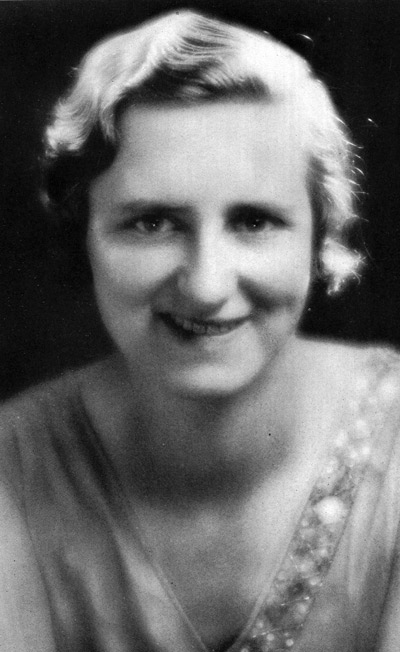 The Mills family—including eight children—moved from Michigan to California in 1918. “The roads were paved in the cities,” Feeder says, “but there was nothing but dirt in between.” When it came time for college, Feeder’s brothers had already determined that she’d join them at USC.

The daughter of a suffragette, Feeder didn’t shy away from studying journalism, though few women enrolled at the time. “The professors didn’t want to teach us because they thought we’d just get married and have babies after graduation,” she recalls. Feeder went on to become a staffer for The Daily Trojan, and after graduation, she dove into the world of media, where she met and married fellow journalist Bill Feeder.

As for those professors who believed she’d forfeit her career after becoming a mother, Feeder proved them wrong: She wrote until she was 98. 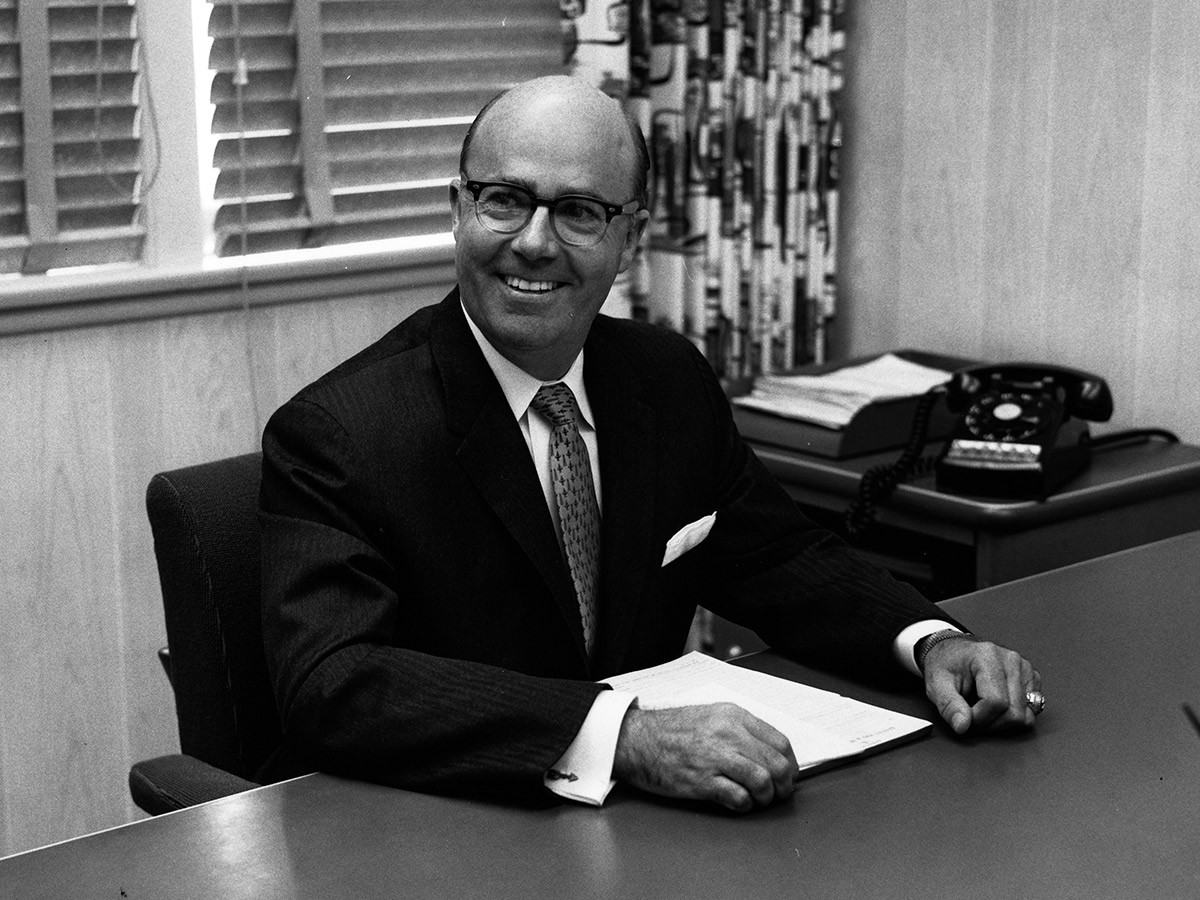 Fred Keenan is the first of three generations of Trojans in his family. | PHOTO COURTESY OF USC UNIVERSITY ARCHIVES

From the moment he stepped on campus, Keenan was a die-hard Trojans fan. The son of Irish immigrants, Keenan was the first member of the family to attend college, and the first of three generations to attend USC.

The Los Angeles native took to college life right away. “I was a big shot,” he teases. Keenan pledged Sigma Chi and met his future wife, Blythe Rae Hawley, at a Greek party.

Keenan has never forgotten his time at USC and enjoyed every minute. He stayed active in groups like the USC Alumni Association, Cardinal and Gold, Skull and Dagger and the Half Century Trojans. Among his many gifts to the university, he established an endowment for a USC Marshall School of Business chair of business and economics and a career center for MBA students. In 2002, Keenan was recognized for his volunteer efforts at the university, receiving the USC Alumni Service Award.

One aspect of Trojan life he remains devoted to is football. A longtime season ticket holder, the 102-year-old attended both home and away games until he was 95. Sharing Keenan’s Trojan love is daughter Susan Keenan Nyby ’64 and granddaughters Noelle Nyby Giuliano ’90 and Molly Nyby Sackett ’93. 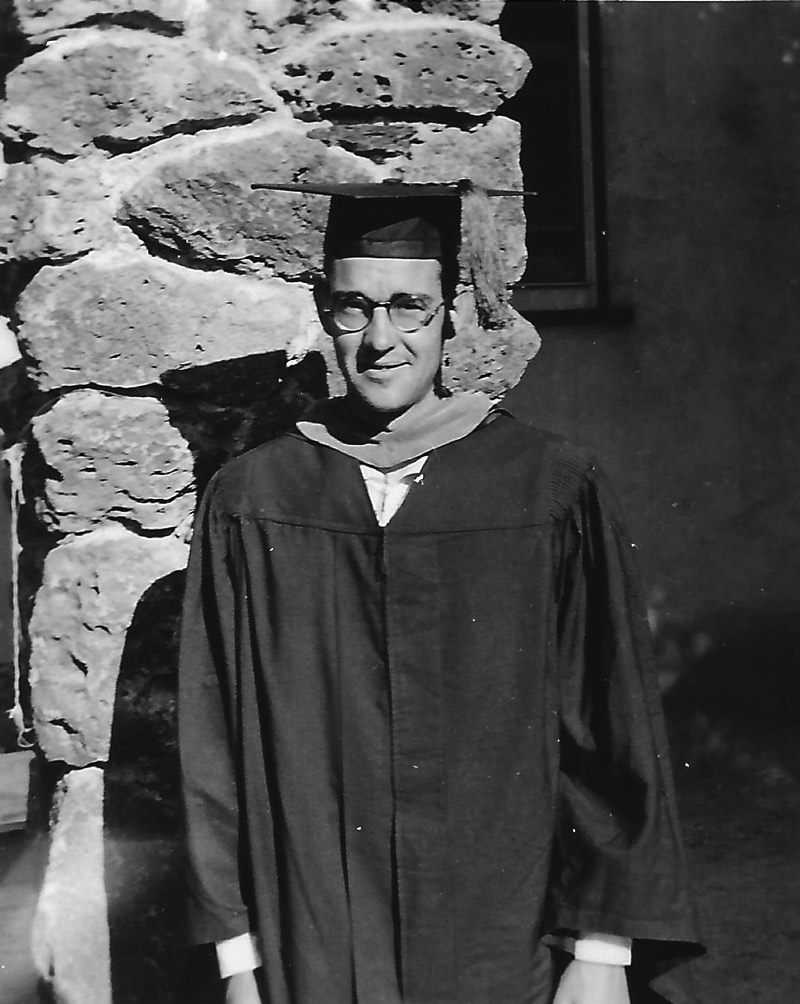 Harry Wolf earned his doctorate in 1953. | PHOTO COURTESY OF THE WOLF FAMILY

Wolf was no stranger to university life when he enrolled at USC in 1952. The Paso Robles, California, native was 43 and had earned his undergraduate degree from Cal Poly San Luis Obispo and a master’s in math from Northern Arizona University in 1933.

He was teaching in Cal Poly SLO’s electrical engineering department when he decided to take a yearlong sabbatical to earn a doctorate at the USC Rossier School of Education. He wasn’t the only Wolf at USC at the time: The eldest of his three children, Gerald, was a sophomore.

The father-son pair enjoyed going to Trojan football games together. “Whenever USC plays Arizona, Dad says he wins no matter what since he has a degree from both,” says Wolf’s daughter Vicki Abrisz Ryal.

The 107-year-old Wolf wrote his autobiography, The Oak Tree, in 2009, chronicling his nine trips around the world with his wife, raising three children, teaching for 31 years and enjoying hobbies like ham radio (he’s now the oldest operator in the United States, says Ryal). These days, he eats modestly—though he enjoys two glasses of wine a day with chocolate chip cookies—and can be found giving his daughters a run for their money at gin rummy. 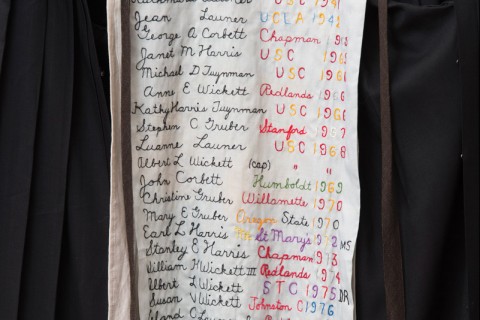 Fred Keenan is the first of three generations of Trojans in his family. | PHOTO COURTESY OF USC UNIVERSITY ARCHIVES Ceremonial Style 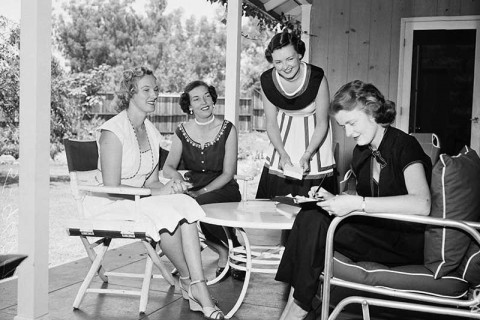 Fred Keenan is the first of three generations of Trojans in his family. | PHOTO COURTESY OF USC UNIVERSITY ARCHIVES legacy

Fred Keenan is the first of three generations of Trojans in his family. | PHOTO COURTESY OF USC UNIVERSITY ARCHIVES Fight On Forever