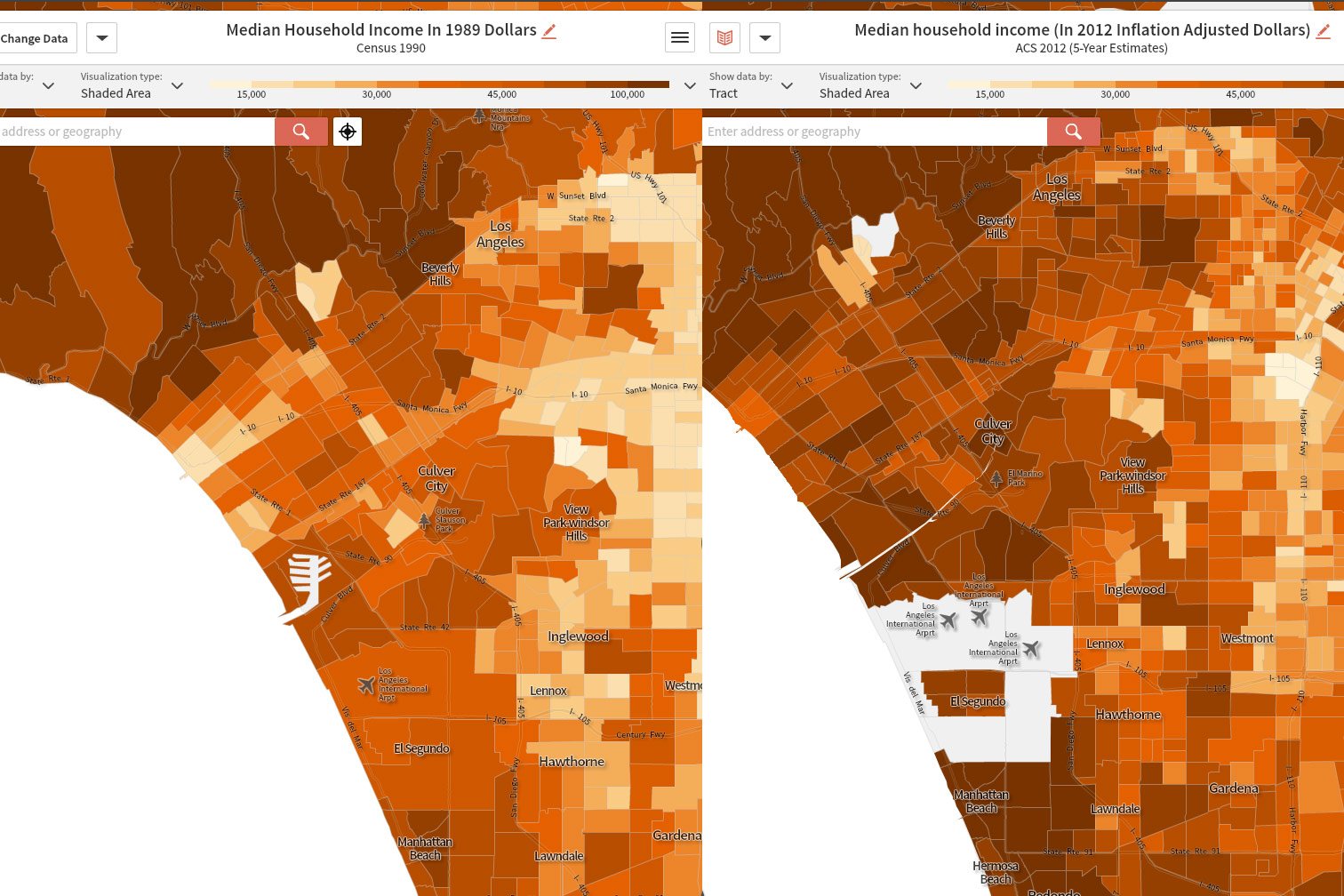 Click on the graphic to explore more data on median incomes. Culver City is among the Los Angeles neighborhoods that have experienced a significant income shift as more families with children move into the area. (Illustration/Social Explorer.com)

Neighborhoods are becoming less diverse and more segregated by income — but only among families with children, a new study has found.

Study author Ann Owens, an assistant professor of sociology at the USC Dornsife College of Letters, Arts and Sciences, examined census data from 100 major U.S. metropolitan areas from Los Angeles to Boston. She found that, among families with children, neighborhood segregation is driven by increased income inequality in combination with a previously overlooked factor: school district options.

For childless families, schools are not a priority for selecting a home, which, Owens said, likely explains the reason they did not see a rise in the income gap or in neighborhood segregation.

“Income inequality has an effect only half as large among childless folks,” said Owens, whose study was published in the journal American Sociological Review. “This implies that parents who have children see extra money as a chance to buy a home in a good neighborhood so that their kids may attend a good school.”

She said the increased neighborhood income segregation that her study uncovered is a troubling sign for low-income families. Studies have shown that integrated learning environments are beneficial for children of disadvantaged households and do no harm to children whose families have higher incomes.

Since the No Child Left Behind Act went into effect in 2002, more data than ever have been made available on schools, the quality of their teachers and their student achievement. It has given rise to a sense of competition and rankings. Owens said this increased focus on performance, plus having access to more information about schools, may have made school an even greater priority for parents.

Policymakers have been trying to address economic inequities through proposals such as wage increases, but based on the trend Owens found, they may have another option.

“If schools play an important role in residential segregation, then breaking that link and making it less important and sort of alleviating parents’ concerns about where their kids are going to attend school would reduce income segregation,” Owens said.

She recommended that educational leaders consider redrawing boundaries to reduce the number and fragmentation of school districts in major metropolitan areas. They also should consider designing inter-district choice plans and strengthening current plans within districts to address inequities.

Owens said she is working on a similar study of racial segregation trends among households with and without children.

Owens is one of several USC researchers who are dedicated to studying social issues that may guide policymakers and leaders toward impactful policies and solutions that address economic, social and political inequalities.

University Professor Manuel Castells has received the 2013 Balzan Prize for Sociology, an international accolade that comes with an award of 750,000 Swiss Francs, or roughly $800,000.