Though the term “aquaponics” was coined in the ’70s, the practice of cultivating food by using the byproducts of one aquatic species as fertilizer for another has been used for almost a millennium. In parts of ancient China, fish were added to rice paddy agricultural systems, and the Aztecs created chinampas by farming in shallow lakebeds.

Contemporary aquaponics systems bring together conventional aquaculture — raising aquatic animals such as fish, snails or crayfish in tanks — and hydroponics — cultivating plants in water — in a symbiotic environment.

Thanks to a prestigious first-time funding grant from Boeing, the USC Wrigley Institute for Environmental Studies has rolled out its Food for Thought educational outreach program, one that uses aquaponics as its centerpiece. Last fall, aquaponics systems were installed in eight K-12 public schools in the neighborhoods surrounding USC as learning tools for classroom lessons in STEM topics (science, technology, engineering and math).

“Middle and high school students get so drawn to these systems,” said Diane Kim, undergraduate programs administrator at the USC Wrigley Institute and a Food for Thought coordinator. “You have fish, you have plants — it’s a dynamic, engaging system.”

The USC Wrigley Institute, housed at the USC Dornsife College of Letters, Arts and Sciences, has developed a way to use aquaponics creatively to offer project-based STEM activities at various grade levels, achieve curriculum goals laid out in the California Common Core and Next-Generation Science Standards, and encourage solutions-based creativity in teachers and students.

The curriculum draws on aquaponics to model complex biological and chemical principles, but aquaponics also serves as an entry point for broader subjects such as engineering, food, sustainability and health.

A partnership between USC and the community

“What’s fantastic about this project is that it provides a partnership for the schools to work with USC and take those next steps forward and apply next-generation science standards,” said Linda Chilton, education programs manager for the USC Sea Grant program, who also develops the Food for Thought curriculum. “But it also addresses issues of the community like access to sustainable and healthy food.” 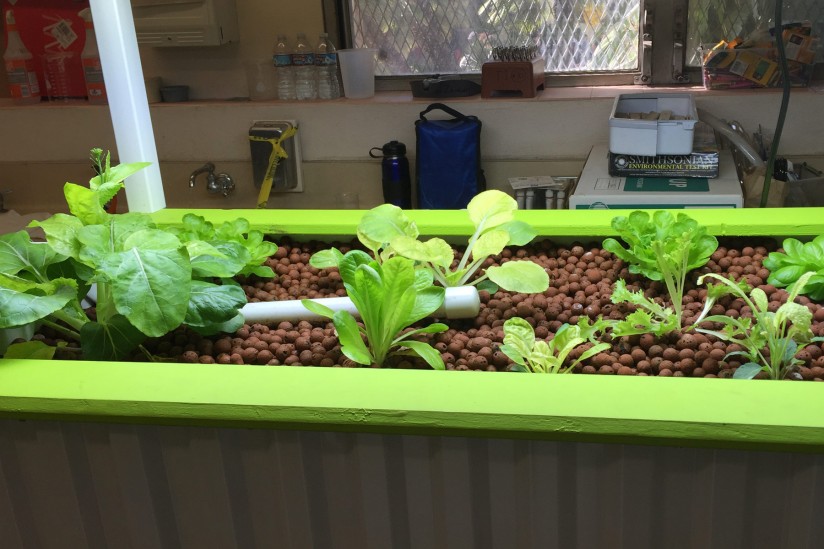 Kim described the students’ enthusiasm for their aquaponics systems, in which their “pet fish” and “pet plants” live — pets that they themselves care for.

“But in order to take care of the system, they need to understand the science behind it, which motivates them to learn about the nitrogen cycle, microbiology, and fish and plant physiology,” she said.

Food for Thought collaborated with OurFoods, a nonprofit organization that custom-designed the aquaponics systems for each school and provided some of the training for system maintenance.

Prior to initiating lesson plans, the schoolteachers took part in two all-day workshops to get a hands-on introduction to aquaponics. Since then, Chilton has been developing a series of lesson plans and worked with teachers and the USC interns to implement them in the classroom, refining them as they go.

“Initially we developed a lot of lesson plans, but what’s happening now is that teachers are approaching us with some of their own ideas,” Kim said. “That’s exactly what we wanted to happen. They’re also providing a lot of feedback on the plans so we’re continuously improving upon what we’re building.”

The program also addresses the food deserts that exist in parts of Los Angeles, which includes the area around University Park campus. “There’s not a lot of connection for students in terms of where their food comes from,” Chilton said.

Food is at the nexus of everything, especially when talking about environmental issues.

“Food is at the nexus of everything, especially when talking about environmental issues,” Kim explained. “But you can go so far beyond that, talking about individual and community health. Students get so excited about these [aquaponics] systems — they ask questions about where their food comes from and start to critically examine the food system.”

To start, students have been growing leafy lettuces because greens grow very quickly. Chilton explained that the system has to achieve a balance before there are sufficient nutrients to provide the nitrate levels that give rise to fruiting plants like tomatoes.

John Zavalney teaches middle and high school science at James A. Foshay Learning Center. The school’s aquaponics system is set up in his classroom, and he incorporates it in all six of his classes, from chemistry to health to environmental studies.

“One thing my students have done is community mapping to identify where all the fast food and convenience stores are,” Zavalney said. “Then they map out where healthy food is available and it’s hard to find. So it’s great for my students to grow [healthy food] at school — when kids grow it, they take ownership of it.

“That’s really powerful, getting that age group to change their eating habits and understand why they should.”

Learning from how animals adapt to wildfire