These three Latin words carved on a passageway above the entrance to the USC School of Cinematic Arts welcomed industry professionals, students and technology enthusiasts to the first Virtual Reality Festival organized by VRSC, a trendsetter in the student VR movement.

USC Viterbi School of Engineering student Jake Green founded VRSC in early 2015, fulfilling his dream of a community in which engineering and cinema students become the next generation of storytellers.

“In reality, these people were not supposed to collaborate,” said Jyotsna “Jyo” Kadimi, a USC Viterbi graduate student majoring in electrical engineering who won the grand prize awarded by the technology company NVIDIA. “But reality ends here.”

Kadimi won for Jyo Rahi! –  a collection of three distinct experiences: a 360 video documenting her journey through iconic monuments such as the Taj Mahal, Eiffel Tower and Statue of Liberty; an Augmented Reality demo that lets people play around with her business card; and an interactive VR game that uses binaural audio.

VRSC founders believe this creative spark and their university-wide inclusiveness is what allowed them to blow open the vault of creative possibilities in VR.

A story fest with a twist

“At the time we did a search, and as far as we know, we were the first VR club in the country,” said Green, who now collaborates with VR producers and the Smithsonian Institute to create a VR experience of the Wright Brothers first flight.

“Our goal was to open the medium to the university at large. You have an idea? We’ll give you the training, the tools and connect you to the right people. You just bring your dream.”

Green was introduced to VR while working on Project Holodeck — a do-it-yourself virtual reality platform he built with his colleagues using off-the-shelf components and custom software. The project was part of USC Games, a joint effort between the Department of Computer Science at USC Viterbi and the Interactive Media & Games Division at the USC School of Cinematic Arts. Project Holodeck has now spun out into the startup Survios.

A year after its founding, VRSC exploded into an energized a hub of students, staff and faculty who came together from various disciplines to test the bounds of virtual reality.

‘A revolution in storytelling’

The festival is a living paradigm of the industry’s “cross-pollination,” said St.John Colón, who teaches an advanced games course at USC Viterbi.

“Look around, you’ll see VR pop up everywhere. Medicine, architecture … you name it,” said Colón, referring to Recall, a memory-enhancing game developed at the GamePipe Laboratory, and Sandbox VR, built by Ashok Kuruvilla, a graduate student in computer science, and Sagar Ramesh, an undergraduate in animation.

Sandbox VR allows users to build virtual worlds with their own hands.

“Think of it as creating a scene in Maya or Unity, but being able to scale the entire world up and down, walk around your world and make precise adjustments as you’re building,” Kuruvilla said.

“I can’t wait to see how we can integrate this new media with urban design and landscape architecture,” said Blake Weber, a master of landscape architecture and urban planning student at the USC Price School of Public Policy, who was at the festival looking to collaborate with content creators and engineers.

Something that immediately hits you at a VR festival is the sheer silence of it all.

Gone are the multitude of voices shouting above the fray of short attention spans and the draining psychodrama of elevator pitches. Instead, visitors are immersed in the whispers of “wows,” in the “oohs” and “aahs” echoing in the hum of hard drives. It invites you to put on a VR headset and experience the exultation in the room. Contrary to popular belief, the future is silent. But in a far off corner there was excitement. People were congregating around Recall.

“Recall is more than a game — it’s a VR mind-hack,” said Kadimi, the game’s co-lead designer and producer.

“We’re going to improve your memory by allowing you to explore mind-palaces made out of your own digital documents,” explained Ferrer, as he slid the VR system Oculus Rift over the eyes of a fascinated participant. “In essence, it turns your data into a playable level designed for easy memorization. Rather than just read something, you explore it like a child.”

Ferrer’s faculty adviser, Colón, who has designed games for DreamWorks, Warner Bros., Nickelodeon and Disney’s Pixar, said he wasn’t surprised a biomedical engineer like Ferrer was attracted to VR.

“There’s a real hunger out there for project-based learning, and VR lends itself seamlessly to that.”

Colón has judged hundreds of industry projects and said, in his mind, these students are ready to compete with the professionals.

“When you compare what they’re doing with the pros who have the money, resources and time, it’s just astounding. There’s virtually no difference.”

YouTube star Sam Macaroni of Disney’s Maker Studios, also one of the judges, agreed, but he took it a step further.

“They’re already ahead of Hollywood studios. We hear it from studio execs all the time ‘Oh, VR, sure, we’re getting into that.’ You should’ve been in it 10 years ago. These young people are way ahead of you.” 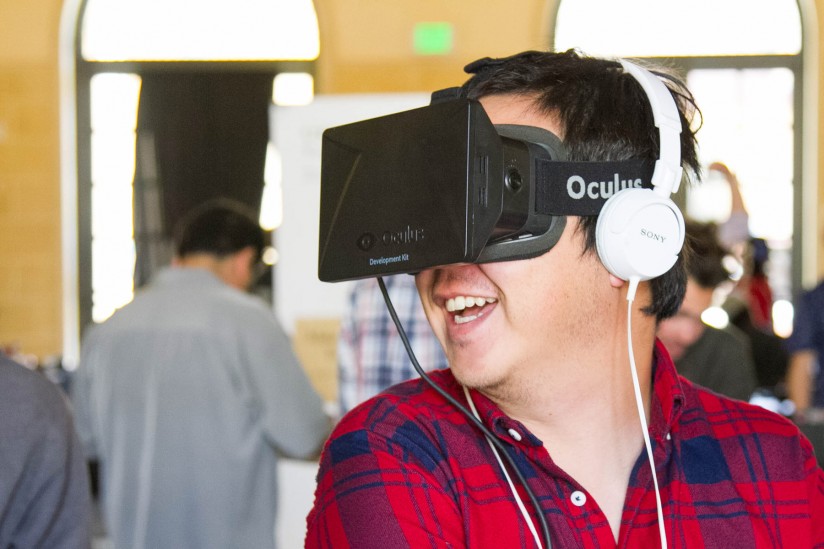 Oculus Rift was developed at the USC Institute for Creative Technologies. (Photo/Alexis Britt)

VRSC president Townley is excited about the limitless potential of the medium and how far it has come.

She showcased her own thesis project at the festival, Children of the Moon, an abstract narrative focusing on Plato’s myth of soul mates. A collaboration among USC engineers, artists, animators, filmmakers and composers, Children takes you into the minds of two dancers struggling to find out if they are each other’s soul mates.

“The beautiful thing about VR … it’s a medium where art, technology and social justice converge,” Townley said. “But it didn’t just happen overnight. It’s been years in the making, and USC has had an historic role.”

She pointed to the USC Institute for Creative Technologies, where Oculus Rift was developed and where, for at least 20 years, researchers like Albert “Skip” Rizzo have used VR simulations to treat patients with conditions such as post-traumatic stress disorder, severe pain and phobias or fears; USC Viterbi Professor Evan Suma invented a novel redirection technique for enabling walking through virtual environments much larger than the physical tracking areas; and the USC Center for Body Computing sponsored “Hacking Virtual Medicine,” a 2015 hackathon where teams of biomedical engineers, computer scientists, physical therapists and even toy designers created health care solutions for patients and providers.

The winner of that 2015 competition was Hyndsight Health, a VR experience that engenders empathy in doctors and patients dealing with blindness caused by diabetes. Hyndsight was created by a trio of cinema, engineering and business students from the nascent VRSC club.

Together, they make up a cohort of futurecasters — Trojan VR evangelists who will push the boundaries of reality for years to come.

Researchers create new augmented reality paleoart to shed light on the extinct species of the region. Learn how you can “see” these animals up close.

What if surplus renewable energy could be stored as computation instead? That’s the thinking behind “information batteries,” a new system proposed by USC’s Barath Raghavan and a colleague.

Playbook VR would allow anyone to build virtual reality experiences, without requiring coding or other background knowledge.