Sergio Cano recently landed his first job — he’s a busboy at a restaurant in Fort Lauderdale, Fla. The hard-working 29-year-old never doubted his ability to rapidly clean tables and keep dishes stocked, but he did have concerns about getting through his job interview.

“I was nervous that I would fidget or that it would take me a long time to answer questions, especially if the manager asked me something I didn’t understand,” he said.

Like an estimated 3.5 million Americans, Cano was diagnosed with autism spectrum disorder (ASD). He’s intelligent and capable, but certain social situations — like job interviews — can be challenging.

A new program called the Virtual Interactive Training Agent, or ViTA DMF, is working to change that.

Developed by the USC Institute for Creative Technologies in partnership with the Dan Marino Foundation (DMF), the program leverages more than 15 years of U.S. Army-funded research and development in the creation of virtual humans to give students with ASD a technology-based solution to help them prepare for job interviews. 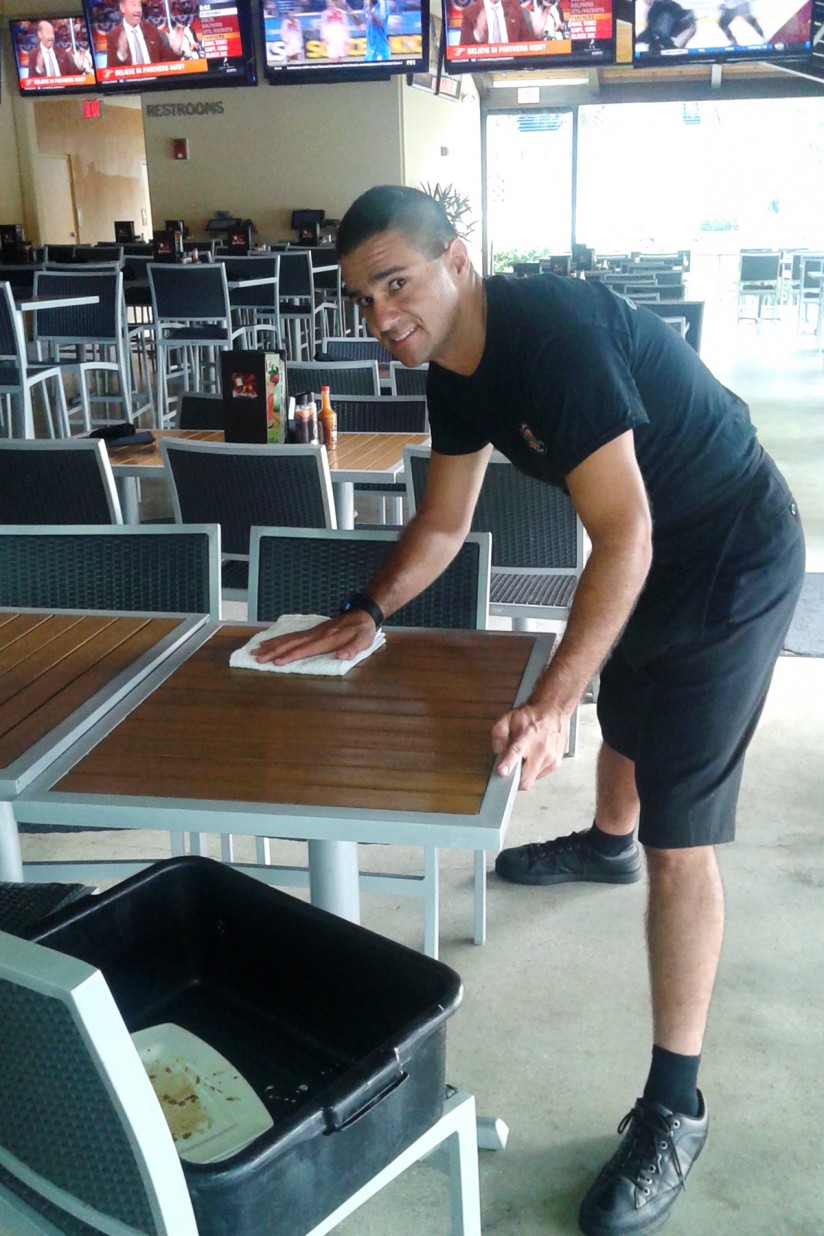 “Our main objective is to prepare young adults for what comes in life,” said Dan Marino,  the former pro football quarterback who chairs the namesake foundation with his wife, Claire. “This unique technology can help people experience certain life-skill situations, and we are excited to offer it to students.”

At the Marino campus, DMF’s postsecondary school in Fort Lauderdale for young adults with ASD and other developmental disabilities, students go through a minimum of four practice sessions with the virtual interviewers in ViTA DMF. These computer-generated characters are programmed to present varied races, genders and personality types. Students like Cano can find themselves facing softball questioners or hard-nosed interrogators.

“Practicing with ViTA DMF helped me to be less nervous and to answer questions better,” said Cano, who graduated from the Marino campus’ school-to-career track in 2014 and has been working at the restaurant for more than a year.

Reports show that young adults with ASD face high rates of unemployment, up to 66 percent in some cases. The hope is that practice with ViTA DMF will help bring those numbers down.

“Until ViTA DMF, there really hasn’t been any innovative tools for young people to practice interview skills, the first obstacle they face in getting a job,” said Mary Partin, DMF’s chief executive officer. “VITA DMF offers something new. It is a cost-effective technology, easily distributed even to areas with limited resources.”

Partin said the majority of students who used ViTA DMF have successfully interviewed and been hired for jobs.

Built with natural-language capabilities, the virtual interviewers pose questions and then reply to an interviewee’s answers. Students interact with ViTA DMF over a computer monitor, and each exchange is video-recorded and reviewed afterward, with instructors providing feedback about an interviewee’s responses, body language and eye contact.

A recent DMF evaluation found that improvement in a student’s interview performance occurred after each interaction with the ViTA DMF system, with the most substantial gains occurring after the second and third sessions. Formal studies to document the efficacy are being planned.

Future work could also include incorporating sensing software so that the virtual interviewer can quantify behaviors — like whether a student is making eye contact or speaking fluidly — and provide automated performance feedback to improve job interviewing.

DMF is now making the virtual reality system available via download to other nonprofit organizations and schools through the ViTA DMF Community. DMF was just named a recipient of a Google Impact Challenge: Disabilities grant from Google.org to enhance the system with new responsive scripts and a user-based logging and feedback system. Along with these enhancements, the grant will fund a national distribution campaign to have ViTA DMF housed in at least 100 organizations nationwide.

“After seeing ViTA DMF in action, we realized there is limitless potential to help in many of the soft skill areas where folks on the autism spectrum struggle, both in and out of the workplace,” said psychologist Skip Rizzo, ICT’s director of medical virtual reality, who co-leads the project. “We can provide experiential practice with a virtual human to help students practice a range of social and vocational skills, including how to take turns properly in a discussion, how to respond when someone says something inappropriate or even how to make small talk.”

Rizzo also noted that a modified version of ViTA will soon be applied to help veterans practice their job-interviewing skills. The software is currently being set up at the Long Beach VA and at the downtown Los Angeles U.S. Vets facility.

ViTA DMF’s virtual interviewers are the latest in a line of immersive tools developed at ICT, a Los Angeles-based research and development lab that specializes in immersive technology to help improve human interactions. Other institute projects include virtual reality therapy for treating post-traumatic stress and virtual human role players that help train junior military leaders in how to address real-world counseling issues, such as financial troubles, alcohol abuse and sexual harassment and assault. 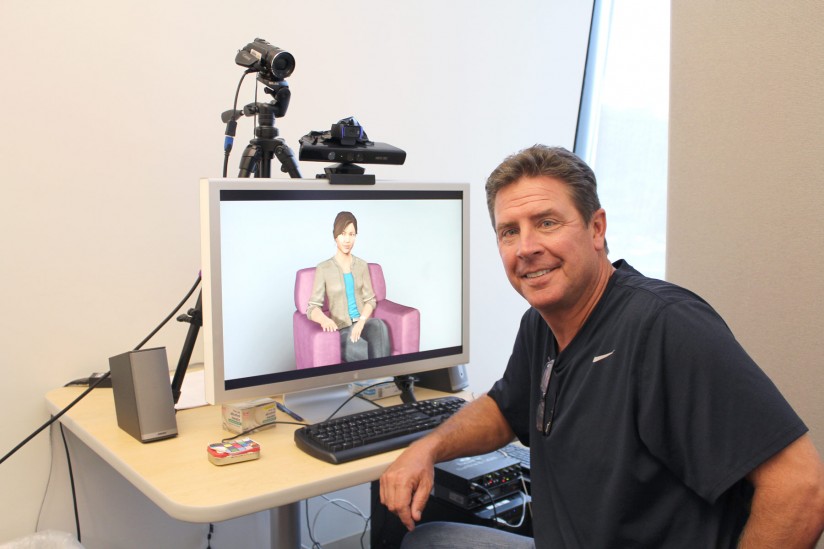 “It has been really exciting to work with the U.S. Army on developing technologies that benefit our soldiers and veterans and then see these platforms expand to help other groups, such as young adults with ASD,” said Matthew Trimmer, co-lead of the VITA project at ICT.

Virtual role players offer the benefit of being available at any time and providing consistency for the interviews. For people with ASD, they also offer a relief from some of the social anxieties that can accompany talking to a real person.

“With ViTA DMF, the fact that students are practicing with a virtual character allows them to feel more comfortable than if they were facing a live interviewer,” said Robert Ahlness, ViTA DMF manager. “With reduced anxiety, they can focus more on learning and building skills to the point where what they have practiced can transfer to the real world.”

Ahlness added that Marino campus students reported that they preferred ViTA DMF and felt they learned more than with a live role player.

Most autism funding and programs are focused on helping school-age children and school-age students. ViTA DMF is geared toward young adults wishing to enter the work force and lead a more independent life. If Cano’s story is any indication, this focus benefits their potential employers as well.

“Sergio impressed me enough to want to hire him, and I am extremely glad I did,” said Kevin Sheahan, manager of the Fort Lauderdale restaurant. “He takes pride in his work, he’s never late and he asks for help when he needs it. He’s an exceptional employee and a great person. Everyone here is so happy that he joined our staff.”

What will 2072 look like? Recorded dreams and AI friends

When USC’s Information Sciences Institute launched in 1972, the video game, pocket calculator and floppy disk were new and the internet as we know it did not exist. What will the next 50 years bring?