With the California primary less than three months away, Donald Trump leads among registered Republican voters in the state with Ted Cruz a close second, according to the latest USC Dornsife/Los Angeles Times Poll. 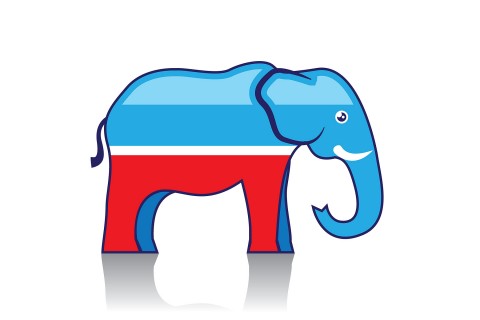 Some voters remain on the fence or prefer other candidates: 9 percent of registered Republicans said they will vote for another candidate while another 9 percent were undecided.

“Donald Trump is still the Republican front-runner, both in California and nationally, but it appears that there may be a ceiling on his support,” said Dan Schnur, director of the USC Dornsife/LA Times Poll and director of USC’s Jesse M. Unruh Institute of Politics. “About 35 to 40 percent of primary voters are strong supporters of his candidacy, but there is still great resistance among the majority of Republicans.”

If Trump wins the nomination at the Republican National Convention in July, 42 percent of registered Republican voters in California would offer him their “enthusiastic support.” He draws tentative support from 27 percent who would “reluctantly vote for him,” but another 27 percent said they would “refuse to vote for him.”

When asked to choose from a group of statements the one that best reflects their views on the recent violence at Trump rallies between his supporters and protesters, 54 percent of all likely voters said Trump is encouraging violence with his rhetoric, while 22 percent said protesters are interfering with Trump’s right of free speech and inciting violence.

Another 19 percent said that the violence occurred in just a few small incidents and that the media blew it out of proportion. The remaining 5 percent either refused to answer, didn’t know or didn’t agree with any of the statements.

The likely voters then responded to a question about what should be done about the violence at Trump’s rallies. Most – 65 percent – said that Trump should tone down his rhetoric because he is worsening divisions in American society. But 27 percent said Trump should continue speaking out because the country’s problems are too serious to worry about offending people.

Four percent disagreed with those statements and 1 percent agreed with both. Three percent refused to answer or didn’t know.

Trump has been outspoken on issues of immigration and refugees from Middle Eastern countries. When asked whether they support Trump’s proposal to ban Muslims from entering the United States, 72 percent of voters said they oppose the idea while 22 percent support it.

All of the registered voters polled were asked about their views on what to do about immigrants who live in the country illegally.

When asked about Trump’s views on dealing with Mexican immigration and the border, 68 percent said they oppose his views and 28 percent said they support them. The voters were also asked whether they favor or oppose an increase on security at the Mexican border to keep out illegal immigrants. Sixty percent were in favor of it and 35 percent opposed the idea.

When asked about Trump’s proposal to build a wall on the Mexican border to keep out undocumented immigrants, 66 percent of all registered voters said they oppose it and 31 percent said they support it.

“These are the types of things that have kept Trump from expanding his support base,” Schnur said. “If he does become the Republican nominee, the fact that so many GOP voters are unenthusiastic or opposed to his candidacy will be a huge obstacle in the general election.”

The latest USC Dornsife/LA Times Poll, the largest statewide survey of registered voters, was conducted March 16-23, and includes a significant oversample of Latino voters as well as one of the most robust cellphone samples in the state. The full sample of 1,500 voters has a margin of error of +/- 2.8 percentage points. Additional poll results and methodology are available online.

About the USC Dornsife College of Letters, Arts and Sciences/Los Angeles Times Poll: The USC Dornsife/LA Times Poll is a series of statewide public opinion polls in California, designed to survey voter attitudes on a wide range of political, policy, social and cultural issues.

Conducted at regular intervals throughout the year, the poll is the largest statewide poll of registered voters and has been widely cited, helping to inform the public and to encourage discourse on key political and policy issues.

About USC Dornsife College of Letters, Arts and Sciences: USC Dornsife is the heart of the university. The largest, oldest and most diverse of USC’s 19 schools, USC Dornsife is composed of more than 30 academic departments and dozens of research centers and institutes. USC Dornsife is home to approximately 10,000 undergraduate and graduate students and more than 750 faculty members with expertise across the humanities, social sciences and sciences.

About the Los Angeles Times: The Times is the largest metropolitan daily newspaper in the country, with a daily readership of 2 million and 3 million on Sunday, and a combined print and interactive local weekly audience of 4.5 million. The fast-growing latimes.com draws over 10 million unique visitors monthly.