USC will not be satisfied until the Trojan Family is united in a shared commitment to justice and equality, said USC President C. L. Max Nikias in his annual State of the University Address.

Before a packed Town and Gown, Nikias delivered a major speech on the topic of diversity, an issue that recently has come to the fore at USC and many other top research universities nationwide. For the last several years, he acknowledged, the country has seen too many incidents of intolerance — and USC has not been immune. He urged the university community to seize this time as an opportunity to stand strong for inclusion.

“When we exclude, we betray ourselves,” he said to faculty, quoting Mexican author Carlos Fuentes. “When we include, we find ourselves.” Nikias went on to add, “It is by embracing every culture, my fellow colleagues, every religious view, every individual, that we find ourselves.”

Nikias stressed the need for open dialogue among USC students, educators and staff about discrimination and prejudice.

“We know that when members of our Trojan Family stand up and speak out, we must lend our ears and listen,” he said. “Because when we listen to each other, we learn from each other, and we understand each other in a deeper and more meaningful way.”

USC may be home to a broad array of perspectives and opinions, but we all must share a common bond: a love of this university.

While such discussion may spur conflict, Nikias called on the USC community to focus on its point of unity. “USC may be home to a broad array of perspectives and opinions,” he said, “but we all must share a common bond: a love of this university.”

During the last five months, many of the discussions between Nikias and students have focused on diversity and related issues. He also has met with graduate and undergraduate student leaders to listen to their concerns about diversity and inclusion and has consulted and discussed the topic with key faculty. 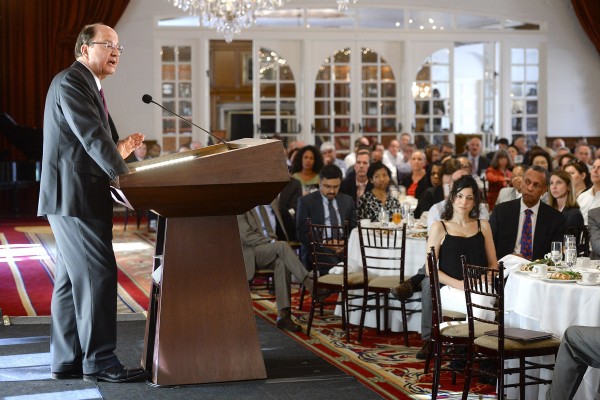 “Throughout time, universities have strongly championed freedom of inquiry, freedom of expression and a relentless search for truth,” Nikias said. “It is only through the crucible of debate that we ultimately determine what is best for our community and our society.”

Nikias thanked Provost Michael Quick for establishing the Provost’s Diversity Task Force, which seeks ways to improve campus climate across USC. He also encouraged involvement and critical conversation from the broader faculty: “We’re developing a deeper dialogue with each of our schools, asking you to offer your ideas and your input to increase faculty diversity.”

USC has added a new mentoring initiative to examine existing faculty diversity programs, he said, and the university will continue to support the Provost’s Postdoctoral Scholars in the Humanities, a program that fosters inclusion among faculty and postdoctoral fellows.

With our great diversity, we must ensure that we remain a university dedicated to access, to opportunity, to inclusivity.

“With our great diversity,” he said, “we must ensure that we remain a university dedicated to access, to opportunity, to inclusivity.

“Together, faculty and staff, students and academic leaders share this important responsibility.”

At the same time, Nikias celebrated USC’s successes in expanding diverse students’ access to the university, regardless of their financial or socioeconomic background, while also elevating the university’s academic standing.

The university has made gains in attracting talented students from low-income families. Nearly a quarter of USC’s enrolled undergraduate students this fall received Pell Grants, an indication of financial need. The sheer number of these students places USC third in the United States in enrolling Pell Grant recipients.

But for universities like USC to act most effectively as tools for economic and social equality, Nikias said, society must prepare a wider swath of young men and women for the academic rigor of higher education.

“Despite all the talk about diversity in American higher education, nobody talks at the national level about the real crisis we face as a nation,” he said.

While only one in 12, or 8 percent of the 3 million American high school graduates have the academic preparation to be considered for a top-50 U.S. university, he noted, “the real crisis is that the pool for qualified underrepresented minorities is even smaller. It’s actually shrinking.”

Only 11,000 African-American students and 24,000 Latino students have the appropriate grades and coursework to enter an elite college. “That’s in the entire nation!” he emphasized.

“If we are going to create more diversity in American higher education among our student body, our PhD students, our postdoctoral scholars and our faculty, eventually we must pay attention to the pipeline,” he said, urging K-12 schools to do better in preparing students for college. “If we don’t do that, we have no chance.”

“I’m very proud of the fact that due to our strategy over the past five years, USC currently ranks number two among all private research universities in Latino students and number three in African-American students,” he said.

African-American students comprise a larger portion of the student body at USC than at any of the University of California campuses that are fellow members of the Association of American Universities (the nation’s leading academic research institutions). “By the way, only 10 percent of our African-American students are student-athletes,” he added.

USC also is promoting education excellence and economic opportunity through community programs, including the Neighborhood Academic Initiative, that help children read and write, inspire them through art and music, promote health and improve well-being, as well as programs that support businesses and create jobs.

Nikias emphasized that the university cannot let up on its efforts.

“Are we satisfied? Of course not!” he told faculty.

Nikias closed the diversity portion of his address by invoking the words of Martin Luther King, noting that USC’s dedication to diversity and to improving the lives of the thousands of residents in its communities mirrors what King was talking about in his “I Have a Dream” speech.

“‘We will not be satisfied,’ he told the crowd, ‘until justice rolls down like waters … and righteousness like a mighty stream.’ And his dream ends with hope, where all people are one family, one community, inseparably bound together.

Meet the new Trojans: the most diverse and academically talented in USC history

The Class of 2019 includes more underrepresented minority students than at most other private research universities.