Clifford Johnson is a champion of making the sciences accessible to all.

When he’s not teaching at USC or working on his research, the professor of physics and astronomy at the USC Dornsife College of Letters, Arts and Sciences lectures, blogs and even advises filmmakers on their presentation of scientific concepts. He’s provided his expertise on episodes of Nova, The Universe, Fail Lab, the upcoming season of Marvel’s Agent Carter and even Screen Junkies, where he has evaluated the physics of Interstellar and Fantastic Four.

His latest project is a mashup of physics and pop culture, which he hopes will engage a general audience. Johnson is writing a book that explores contemporary science using graphic-novel storytelling — comic-book style images that convey a narrative — which he’s not only writing but drawing himself. Dialogues on the Nature of the Universe: A Graphic Book is slated for 2017 publication by World Scientific.

Tell us about your interest in bringing science to mainstream audiences.

It’s part of what I consider my work beyond teaching physics the traditional way in the classroom or what I share with the world through my research. Science is part of this wonderful network of culture that we have as human beings. For one reason or another, it kind of got pushed off to the side in people’s minds as something that a very narrow group of people understand or partake in. I’m trying to put science back into the culture where it belongs.

Why did you decide on a graphic book as the format for your project?

The graphic book is really an attempt to do something different in the sphere of popular science books, which tend to be — at least in my field — a very particular kind of thing that has a very particular audience that is predisposed to read a science book. I really wanted to broaden that audience and the ways in which we communicate science at the popular level. 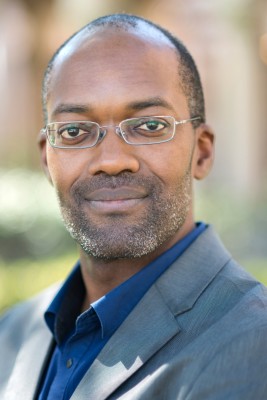 I was also thinking about how scientists in my field present ideas to the general public. We tend to clean them up, leaving out the visual elements of our process. That’s not how we think about things. We will scribble on a page, use diagrams, figures, equations, etc.

It’s hugely important to talk about the way, as scientists, we come up with our ideas. That doesn’t come up much in popular-level books about science. It’s like someone just wrote a rulebook and here are the rules, but science isn’t about that. It’s this wonderful process by which you discover truth about the universe. So I talk a little bit about the process in the book as well.

In the book you present scientific concepts as a series of dialogues between pairs of people. What influenced that decision?

There is a long history of dialogues used to educate. For instance, Galileo wrote dialogues as a way of illuminating ideas in the public sphere. His discoveries and thoughts about how the solar system worked were in that format, and they were the popular books of their day, at least for the people who could read. It was a great way of communicating ideas.

With the conversational aspect, I wanted to bring out the beats of the conversation around an idea — including some of the wrong turns, the dead-ends. I feel that makes learning about science more accessible to people because it’s an ordinary human exchange as opposed to this beautiful symphony that came out of the heavens or from some expert in an ivory tower.

How did you select which scientific concepts you will explore in the book?

There are a number of topics in science that people are just interested in again and again — how the universe began or how time works. What is a black hole? Exactly what do we learn from relativity about how the universe works? What’s the science behind the idea of the multiverse? Those are some of the hard-core scientific questions that I’ll look at in the book. But I’ll touch on others, too, and in some cases intertwine them with familiar things from everyday life.

You’ve decided to create the artwork for the graphic book yourself. How did you go about preparing for such a large undertaking?

I’ve always scribbled and sketched over the years, like many people. But there’s a world of difference in doing that and producing a 300-page book with dozens of interconnected drawings per page. In order to tell a cohesive narrative, I needed to be able to consistently do those kinds of drawings. I put in a lot of time practicing. I’ve found the best way to learn to draw is just to draw.

When you start sketching, you realize the entire world is full of opportunities to sketch things, and you actually see the world differently. You look at how everyday things are really put together and how they connect to each other. At first it’s daunting, but it’s also kind of wonderful. There’s a metaphor here between learning to draw and many people’s approach to science. They say, “It’s not my talent and therefore I cannot do it,” and they never try. That’s a huge mistake and a missed opportunity.

Has this project in any way influenced how you present information to students?

I think people who know me and my style of approaching physics would probably say that it makes sense I’m creating a book like this. At USC, I teach at all levels, so I’ll teach freshmen one semester, upper-division undergraduates in another and sometimes special topics graduate classes. Being hands-on with visualization is something I try to bring to all those classes. I think it’s fun and important to me to keep finding different ways of explaining things to different levels of audiences, including people who just want to learn about the science but don’t necessarily want to become a professional scientist. I love doing that. I also love training the next generation of scientists.

USC is home to one of the most advanced microscopes in the world — a device that pushes beyond what was once believed to be the boundary of visible light imaging.

The films and the bees

Why should we adopt altruistic behavior rather than act out of self-interest?