They are among the most sought after students in the country – the low-income, high achiever.

They include Lauren Mullarkey-Williams of Pittsburgh, who found USC through the university’s partnership with QuestBridge, an organization that “connects the world’s brightest low-income students to America’s best universities.”

“It’s difficult for students coming from low-income families,” said Mullarkey-Williams, a freshman in the USC Price School of Policy. “For USC to seek us out and let us know there are options and they want to help us succeed — that is very important.”

Turns out there are many students just like Mullarkey-Williams at USC, where nearly one in four comes from a low-income family. Most Pell Grant-eligible students have family household incomes of less than $50,000.

With nearly 24 percent of its undergraduates eligible for a Pell Grant, USC has a far greater share than at almost every other private, highly selective university.

It isn’t an accident that USC has so many students who come from community college and financially diverse backgrounds.

“It isn’t an accident that USC has so many students who come from community college and financially diverse backgrounds,” said USC Provost Michael Quick, a first-generation college graduate from a family of limited means who put himself through college working in construction.

“USC has been given a tremendous privilege. With that privilege comes responsibility,” Quick said. “We aim to be the great private research university that takes on the most intractable, difficult, multifaceted problems of our time, which includes access to higher education.”

Only Columbia and Emory universities at 21 percent come close to USC among top-25 private universities. The median is 14 percent. 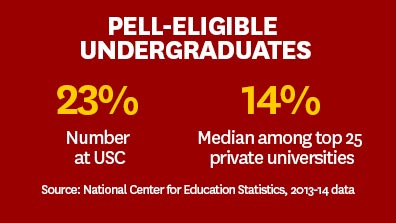 Many top universities have had high-profile struggles — played out in The New York Times and The Chronicle of Higher Education — in their attempts to find more low-income, high-performing students.

“At some similar institutions, like the University of Southern California, Pell Grant recipients make up more than 20 percent of undergraduates,” reported the Chronicle of Higher Education in a story titled “A Distinction Washington U. Wants to Lose: Least Economically Diverse.”

How does USC do it?

“The truth is, we work harder,” said Katharine Harrington, USC vice president of admissions and planning. “This is a priority for us.”

USC employs an all-in approach that combines early preparation and national recruitment with an eye on results.

USC recruiters visit nearly 2,000 high schools in every U.S. state every year. And those recruiters are actually USC assistant directors of admissions who later make recommendations on which students — many of whom they have met personally — will be admitted to the Trojan Family.

The recruiters’ 500 annual visits throughout California include well-known private schools, but many are also in communities where schools are overcrowded and underfunded.

Foshay Learning Center, a nearby South Los Angeles K-12 public school, is now one of USC’s top feeders. That’s where Tristan Baizar graduated from high school in 2013. Baizar came to the United States from Belize with his older sister and single mother when he was 4 years old. Now he’s an accounting sophomore at USC.

“At USC, quality equals diversity,” said USC Dean of Admission Timothy Brunold. “Some think it is a low return on investment to send a recruiter across the country. For us, it is an opportunity. Students sit up and take notice when we walk in — one of the most selective institutions is coming to call and picking the best students.

“We want to be on their list,” Brunold said. “We are trying to send signals about USC’s values.”

It wasn’t long ago, USC would visit only a handful of high schools on the East Coast, and the results were reflected in the pedestrian 16 percent Pell Grant rate in 2008. USC worked to increase that by nearly 50 percent in the eight years since.

Recruiting as a priority

Over the last decade, dozens of colleges have proclaimed that recruiting a more economically diverse student body was a top priority. Many of those colleges have not matched their words with actions, reported The New York Times in a story titled “Generation Later, Poor Are Still Rare at Elite Colleges.”

In addition to travel and recruiting costs, attracting Pell Grant-eligible students is expensive because Pell Grants max out at $5,775 this year. The New York Times estimated that “sustaining one poor student who needs $45,000 a year in aid requires $1 million in endowment devoted to that purpose; 100 of them require $100 million. “

But USC fights well above its weight by that metric as well.

While USC failed to crack The Chronicle of Higher Education “25 Richest Colleges by Endowment Dollars Per Undergraduate” it does compare favorably to No. 1 through 5 on the wealth list for recruiting low-income, high-achieving students. 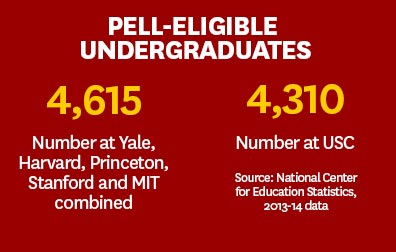 “USC is a private research university that looks like a public — we are a larger institution that achieves a high level of socioeconomic diversity with a smaller endowment per student.” said Thomas McWhorter, USC’s dean of financial aid. “That is another way how USC is different.”

Preparation: Creating the USC scholar in the sixth grade

In addition to scouring the nation’s high schools, USC has developed its own pipeline for high-achieving, low-income students to realize their dreams.

As a result, the entire Garcia-Nava family will be changed forever. Wendy Garcia-Nava grew up the youngest of six in a one-bedroom house near USC – without a home computer. Now she and two of her brothers are at USC after graduating from the USC Neighborhood Academic Initiative.

USC created the college prep program and offers a full-financial aid package to all who are accepted to USC. The program just expanded and will eventually be enrolling more than 1,000 children.

Top colleges differ markedly in how aggressively they hunt for qualified teenagers from poorer families, how they assess applicants who need aid and how they distribute the available aid dollars, reported The New York Times, in a story titled “Efforts to Recruit Poor Students Lag at Some Elite Colleges.”

Ramirez, who graduated in May, was a standout student in the USC Roski School of Art and Design — after spending five years juggling classes with as many as three jobs at Citrus College in Glendora.

At USC, one of every six students started at a community college. At other selective private institutions, it’s one of every 1,000 students.

[USC] has been leading the way by widely recruiting and admitting transfer students from two-year community colleges.

And once those students enroll, they are given personalized treatment, whether it be identifying specific students at risk of dropping out because of a lack of funds or flagging students for counseling who might not be taking the right classes to graduate on time.

The six-year graduation rate of Pell-eligible students is 91 percent — on par with their peers — and they have less student debt than the national average.

But why is diversity worth such an effort?

“With race-based affirmative action losing both judicial and public support, many have urged selective colleges to shift more focus to economic diversity,” stated New York Times higher education reporter Ricardo Perez Peña last year.“This is partly because students are more likely to graduate and become leaders in their fields if they attend competitive colleges. Getting low-income students onto elite campuses is seen as a vital engine of social mobility.”

Or put another way: “Diversity is something that our students desire and, actually, something that we consider to be part of our core mission,” McWhorter said. “Access to higher education is a mandate. Finding that many students is not easy.”

Can California close its education gaps?

Antonio Villaraigosa, USC Price discuss the creation of an educational system for the 21st century.

The future pharmacists cover disparities in local communities with help from USC faculty.