Guided by the inspiration of a legendary animator, Heather Blodget ’07 is living her dream by working at Walt Disney Animation Studios. The USC School of Cinematic Arts alumna charts her creative growth since graduation, discusses her dream job and advises students to be open to all opportunities.

How has being a USC alumna impacted your career?

Probably the biggest impact is that I actually applied for my internship with Disney because of a fellow SCA student. She handed me a flyer she’d found and said, “ Hey, I saw this and know you love Disney — you should check it out.” What felt like 15 interviews later, I started my journey with Disney.

In what ways do you hope your work touches its audience?

I always hope that the films I’m part of inspire and uplift our audiences. There’s so much negativity in our world and in the media these days, and I think people want to escape and leave the theater feeling better than when they walked in. Movies are so powerful and have the ability to reach so many people — I want to send messages of positivity and hope.

Which films have been the most influential to you and your filmmaking path?

Definitely the films of Walt Disney — and I’m not just saying that because I work there now. I actually remember introducing myself on the first day of class at USC, saying I wanted to make films that were uplifting and that appealed to the young and old alike. That was very much inspired by Walt Disney, someone I grew to admire after a yearlong research project in high school. Crazily enough, it never really occurred to me I could work for Disney Animation, but it’s funny how things work out.

Talk about your start with Walt Disney Animation Studios.

I started just about eight years ago as a production assistant on an early version of Tangled, then called Rapunzel. I began working in the editorial department, prepping for recording sessions, attending editorial reviews and taking notes. After a year, I moved to the story department, scanning story sketches and attending story meetings. I then moved into other production departments, making my way down the animation pipeline, which really gave me a good overview of the animation process. All in all, I spent about three years on Tangled, and it was amazing to see the whole process from beginning to end. And now to walk into the parks and see Rapunzel in the parades and hear the music in the fireworks show is an incredible feeling. 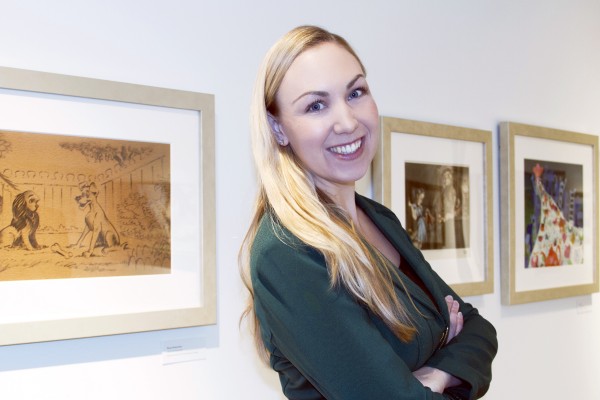 “I think people want to leave the theater feeling better than when they walked in,” Blodget says. (Photo/Megan Archer)

Thus far, what is the most memorable project that you have worked on?

All the projects I’ve worked on with Disney have been truly memorable. Frozen was a particularly memorable experience for me, especially since it was my first role as a production supervisor.

Early on the development process, the story and editorial departments work together to put up “screenings” of the film to see how the story is working and to get notes from the “brain trust” — a creative collective of directors, producers and executives. It was my job to manage this process and make sure everything was boarded, cut together, recorded and reviewed in time for the screenings. It was so amazing to watch these artists put their heart and soul into preparing one of these screenings, and then to receive notes (which often ripped the film apart) and then to watch them react gracefully and collaborate to come up with solutions together. For me, the greatest takeaway is to not be precious with your art and to be open to constructive notes that can come from anywhere. The result is always more satisfying.

What advice do you have for current SCA students?

Always be open to notes, especially story notes, no matter how far you’ve gotten with a script or a project. I didn’t realize it at the time, but SCA’s focus on story, and having other students give notes on your work, was the best preparation for stepping into Hollywood. When I got to the studio and watched this process, it felt normal to me because that’s exactly how SCA classes were structured.

Also, focus on training the skills you want to foster instead of worrying about the job you want to have. I had no idea production management for animation existed when I started film school, and it ended up being my dream job. There are so many unique jobs out there and the industry is changing so fast, it’s impossible to nail down exactly what you’ll end up doing. Be open to the possibilities and what you discover along the way. Don’t be afraid to take that flyer from a fellow student about an opportunity.

After wrapping up after two years on [the upcoming] Zootopia, I am going to take a much-needed vacation. When I get back, I’ll start my next project — a film I can’t talk much about yet, but it’s sure to be another exciting ride. In the meantime, I’m going to take all my friends and family to see Zootopia. I can’t wait to see their reactions — watching them fall in love with the world and characters make all the hard work worth it.

The director, writers, editors and composer give students the inside story on the hit film.

USC School of Cinematic Arts goes Back to the Future

Co-star, screenwriter and production designer turn out for a screening of the film trilogy.