Tom Garrison was four hours away from camp — headed into the city down a bumpy jungle road to get treated for poisonwood exposure — when he got a call from his co-director Edwin Román.

“You need to get back here right now,” Román declared.

Back at El Zotz, a ruined Maya city hidden deep within Guatemala’s Maya Biosphere Reserve, one of his archaeological teams had hit paydirt — a burial chamber in the Five Temples section of the site that could contain the remains of royalty.

He turned the truck around.

Garrison, an assistant professor (teaching) at the USC Dornsife College of Letters, Arts and Sciences, is the principal investigator running the archaeological exploration of El Zotz, an isolated and overgrown Maya ruin to which he returns each spring.

At 6-feet-3, he’s an imposing man with an impish grin and an impressive knack for being able to recount any detail of Maya language or history on command.

Garrison refers to El Zotz in the royal “we” — as in, when describing its turbulent past, he describes how “we invaded Tikal” — and for that matter, has an appropriately antagonistic take on El Zotz’s more famous big brother to the east.

Tikal is like the Los Angeles to El Zotz’s Pasadena — so large, impressive and close that it tends to eclipse its neighbor in the public eye. But El Zotz has proven to be a font of information for archaeologists, helping them to piece together an understanding of the region’s changing political dynamics, and by extension, the Maya people.

A freshman in the field

Garrison discovered archaeology as an undergraduate at Connecticut College, when he enrolled in an intro course as a freshman. His love for the field was kindled during a junior-year study trip to Oaxaca, during which he visited the Maya site of Palenque.

He now works to inspire the same love of exploration into the past through his course offerings at USC and through two “Problems Without Passports” courses (“Maya Resilience” and “Field Research in Maya Archaeology”), both of which allow him to take USC undergraduates on explortions of Maya ruins in the jungles of Guatemala.

El Zotz, his home and office every spring, spreads out over roughly two square kilometers of jungle, which includes a massive royal palace and temple on a hill overlooking groups of temples and smaller dwellings in the valley below. Its name is a modern appellation, taken from the Maya word for “bat” — hundreds swarm the skies every evening and then sleep in a nearby cave where the Maya believed that the sun dwelled when not illuminating the world.

During the time of the Maya, it was known as “Pa’chan,” meaning “fortified sky.”

When the Maya inhabited it 1,500 years ago, they had deforested the whole region, offering the royals above a commanding view of their subjects. Today the jungle has reclaimed the valley, obscuring it with a thick canopy of trees and vines — much of it sprouting within the old Maya structures.

With mere days left in the excavation season — before heavy rains transform the already-muddy roads that lead to El Zotz into an impassable sludge — Garrison and his crew had to work around the clock to excavate the tomb. The team also faced the ever-present threat of looters, endemic in the world of Maya archaeology. 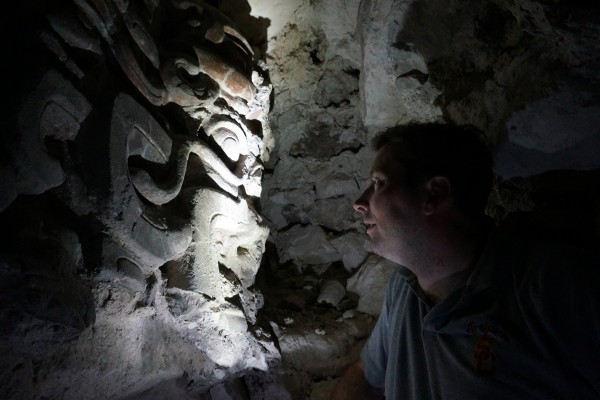 Garrison comes face to face with a mask inside one of the site’s pyramids. (USC Photo/Robert Perkins)

El Zotz alone has 230 trenches and tunnels cut into the site’s pyramids and other structures by cunning, unscrupulous diggers who make a slim profit selling cultural artifacts on the black market.

Often rich with bowls, figurines and other valuable goods, tombs are a tempting trove for looters. Even with the archaeologists camped near the site and soldiers guarding the biological preserve where it sits, any open tomb is vulnerable once word of its existence gets out.

Atop the royal hill

In 2010, Garrison and his colleagues — at the time led by Brown University’s Stephen Houston, a living legend in the Maya archaeology community — brought international attention to El Zotz when they uncovered the intact tomb of a Maya king beneath the Temple of the Night Sun in a pyramid known as “El Diablo” perched atop the royal hill across from the Five Temples.

The 40-foot-tall pyramid is the highest point in the city, offering an eye-straining view of the Tikal pyramids that peak above the jungle to the east. The team’s excavators make regular pilgrimages to Diablo’s eroding crown — not for the view but for the cellphone service.

The 2010 discovery occurred just beyond the end of a looter’s tunnel in El Diablo — if the looters dug a little deeper, all that would have been left for Garrison’s team would have been an empty void. Instead, the team found what National Geographic would later name one of the “discoveries of the year.”

“It smelled like death,” Garrison said of the tomb. Literally. Unpleasant but a good sign that the tomb had miraculously managed to remain sealed over the centuries.

That ignited a race to complete the excavation before looters descended. Upon finding the tomb, Garrison and Houston promptly had a conservator flown from the United States to Guatemala to help properly extract and preserve the artifacts. In a taxi on the way to the airport to pick her up, the taxi driver — who recognized Garrison from a previous trip to Guatemala — smiled and said, “I heard you guys found something.”

Somehow, word of the discovery had already reached people in Flores.

“That’s never what you want to hear this far out,” Garrison said. Ultimately, he and his crew found bowls of human fingers, wood carvings, bejeweled teeth, sacrificed infants and more.

Based on the design of other contemporary Maya temples, it was theorized that there might be a second tomb in front of the original chamber; Garrison spent the first part of the field season in search of a second tomb in El Diablo, though an excavation of its theorized location ultimately found nothing. 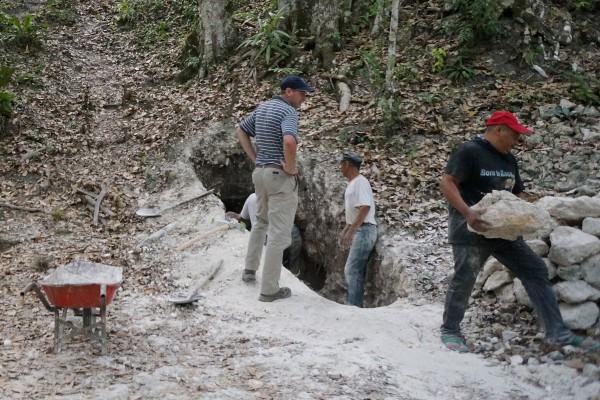 The team reopens a tunnel into one of the main pyramids at the El Zotz site in Guatemala. (USC Photo/Robert Perkins)

As in 2010, the tomb discovered this summer was found when least expected: Guatemalan archaeologist Jose Luis Garrido was cleaning off a low platform when it gave way, opening a small void. Although untouched by humans, its contents had been looted … by rats.

Tree roots had stretched and pressed through the tomb’s walls, giving the rats passage. The furry intruders consumed and destroyed anything organic but left intact four beautiful polychrome bowls. One bore the name of a king: Bakab K’inich, which translates roughly as “The sun god who is first in the land.”

With the clock ticking, Garrison and his team documented the tomb, preserving its contents with mere days to spare until the end of the field season.

A team of USC Dornsife archaeologists and students help to preserve a part of history at Hollywood Park.

When paintings came alive at twilight

USC historian plays with the pieces of an ancient puzzle

An expert on the Ptolemaic dynasty broadens her studies of Hellenistic Egypt.

When in Rome, undergraduates dig into history

USC students on an archaeological adventure learned about art, ancient Roman history and a few surprises.