This story was originally published in December 2015.

Traditionally the worst thing badly behaved American children have had to fear during the holiday season was reaching into their Christmas stocking and pulling out a lump of coal. And even if exasperated parents still occasionally toss out the coal threat, few — if any — actually carry it out (although those on Santa’s naughty list beware — lumps of licorice “coal” are now widely available as novelty items on the candy aisle in American stores).

But for children in some central European countries, the story is very different. For centuries, disobedient children in Austria and other Alpine countries have faced a truly terrifying Christmas consequence for their misbehavior — a dreaded visit from Krampus. 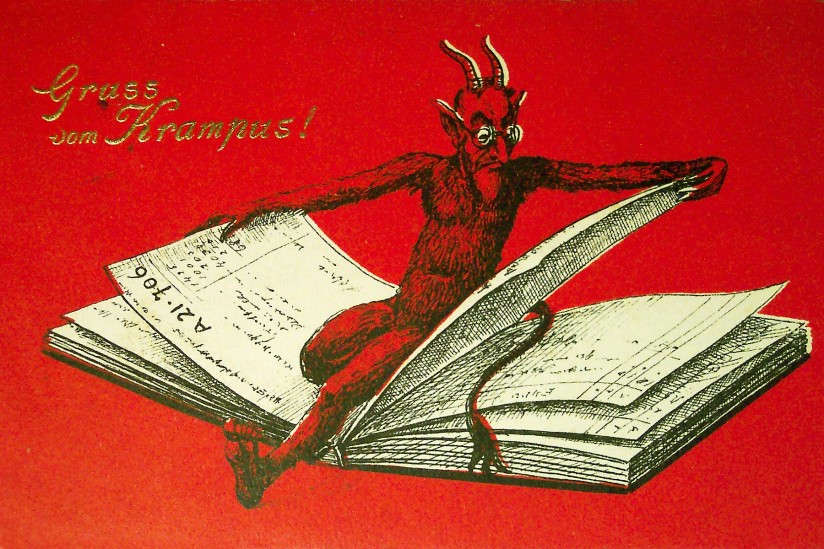 Krampus is seen in this vintage postcard. (Photo/Courtesy of USC Dornsife)

With his curving horns, towering, hairy body, one cloven and one human foot, lolling long, red, pointed tongue and grimacing features, Krampus is a mythical figure dating back to at least the Middle Ages and possibly earlier.

Apparently created to strike terror in the hearts and minds of small children — and quite a few adults, too — Krampus traditionally carries a ruten bundle, or birch rod, to whip those who have misbehaved and chains to bind those who have strayed from the straight and narrow.

Strapped to his back is a leather bucket or woven rush basket to carry away naughty children, and around his waist is a stout leather belt to which are attached several large cowbells.

The fact that the Krampus can be heard before he can be seen makes him even more frightening — replacing the joyful sound of sleigh bells with something far more sinister: the menacing clanking of rusty chains accompanied by the eerie tinkling of cowbells.

Banned by the Nazis

“It’s a very old custom,” Bothe said. “We know Krampus dates back to before the Inquisition because it was banned then. Anyone caught dressing up as a Krampus faced the death penalty because it was perceived as a devil figure.”

Interestingly, the Nazis also banned Krampus for its pagan origins. More recently, concerns have been expressed in Austria about whether the tradition is appropriate for children. However, the huge popularity of Krampus lives on and is now enjoying a resurgence.

Coming soon to a town near you

Formerly familiar only to inhabitants of Austria, the Bavarian region of Germany and countries of the former Habsburg Empire, Krampus has now made his debut in America. This year’s holiday horror flick Krampus — the story of one American family’s battle to win back their Christmas spirit from the fiendish figure from Alpine folklore — is enjoying considerable success at the box office this holiday season.

In addition to the new movie, the horned beast has inspired a comic book series. Los Angeles hosted a Krampus Ball and its third consecutive Krampusnacht festival in the streets of downtown this year, and for the first time many other U.S. cities followed suit. This year, the L.A. Krampusnacht featured a troupe of more than a dozen Krampuses sporting traditional animal-hide costumes and hand-carved, horned masks who flew in specially from Austria for the occasion.

And it’s not just America that is embracing Krampus creepiness. Krampus festivities — popular in Bavaria and the Tyrol region of Austria and Northern Italy for generations — are catching on throughout Germany, Austria, Slovenia, Hungary and the Czech Republic. Krampus is being celebrated as far away as France and Finland.

A whole gang of Krampuses

Krampus has its origins in pagan traditions in Germany where, the legend goes, he was originally one of the sons of Hel, Norse god of the underworld.

In Alpine towns and villages, young men traditionally disguise themselves as the mythical creature and parade through the streets in an ancient pagan ritual known as the Krampuslauf, or Krampus Run, that is meant to disperse winter’s ghosts.

In Austria and Bavaria, Krampus Day takes place Dec. 5, when Krampus accompanies St. Nicholas as he makes his rounds.

“In Germany, children put their shoes or boots outside the door on the evening of Dec. 5 and hope St. Nicholas, the patron saint of children and the basis for our Santa Claus, will fill them the next morning with sweets, nuts and other goodies,” Bothe said.

In most parts of Germany, St. Nicholas is accompanied by his counterpart, Knecht Ruprecht, who punishes naughty children.

“The Krampus is a different take on this tradition in which Knecht Ruprecht is replaced, not just by one — far more terrifying — Krampus figure, but by a whole troupe of them,” Bothe said.

In some towns you have Krampus runs with a hundred Krampuses running around in the street. They are wild and it can get pretty boisterous.

“In smaller towns St. Nicholas may appear with a small gang of four or five Krampuses. In some towns you have Krampus runs with a hundred Krampuses running around in the street,” she said. “They are wild and it can get pretty boisterous.” In 2008, more than 1,000 Krampuses participated in one of the biggest Krampus runs, in St. Johann, Austria.

Krampus is reminiscent of the bogey man and also of traditional German fairy tales, Bothe said, citing the tales of Brothers Grimm, Struwwelpeter, and Max and Moritz.

“All these gruesome tales feature wild children who come to a very bad end. This theme of the bogey man who punishes misbehaving and immoral children runs through the centuries and was widely told to keep children in line,” Bothe said.

The Krampus tradition also has an element of establishing social order, Bothe said: “It wasn’t until the 17th century that it evolved to become more focused on children. In its earliest incarnations in pagan societies, if adults were greedy, indecent or too strict, they were also visited by Krampuses, so it definitely had an underpinning of general social control.”

A certain freedom from social constraints

So why is Krampus enjoying such renewed appeal and why are Americans adopting this Alpine tradition?

Halloween has never been a tradition in continental Europe but now people have started celebrating it there, albeit on a much smaller scale than in the U.S.

One reason Bothe mentions is the globalization of traditional festivals. “Let’s not forget it’s a two-way street,” she said. “Halloween has never been a tradition in continental Europe but now people have started celebrating it there, albeit on a much smaller scale than in the U.S.”

Krampus, used for centuries to promote social and parental control, also offers a brief window of escape from modern societal constraints. Bothe suggests this is a large part of Krampus’ modern-day appeal, comparing Krampus festivities both to traditional European carnivals and to Halloween, where people have an opportunity to dress up, mask their identities and run wild.

“People delight in having a day or evening spent outside regular social norms,” she said. “Dressing up and disguising your appearance represents a kind of freedom, a liberty to do certain things that you wouldn’t usually do, especially when you feel safe in the knowledge that no one can recognize you.”

Ghosts, ghouls and skeletons have become synonymous with Halloween. A USC Dornsife scholar and folklorist explains how Halloween continues an ancient Celtic tradition of the celebration of the dead.

One hundred years ago, the excavation of King Tut’s tomb brought us a mummy with a “pharaoh’s curse.” Our fascination with mummies goes back much farther, however. USC Dornsife scholars explain why we’re still so wrapped up in these eerie remains.