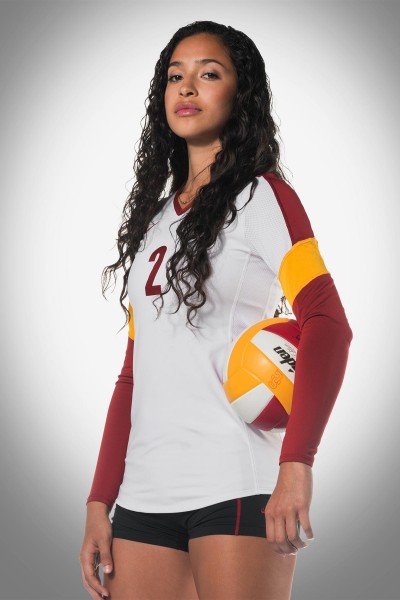 Samantha Bricio is the AVCA National Player of the Year. (USC Photo/John McGillen)

A first-team AVCA All-American and the Pac-12 Player of the Year, Bricio now receives the single highest honor for a volleyball student-athlete to complete her four-year career with the Women of Troy.

The coveted award was presented to Bricio at the AVCA All-America/Players of the Year Banquet in Omaha, Neb., as part of the 2015 AVCA Annual Convention.

Bricio, from Guadalajara, Mexico, is the seventh USC player to receive AVCA All-America honors three times in her career and was a four-time AVCA Pacific South all-region selection. She is the third Trojan to receive all-region honors four times and joins April Ross (2000-03) and Jasmina Marinkovic (1995-98). This season, she led the nation in points (803.0), points per set (6.18 pps), service aces (89) and aces per set (0.68 saps).

Bricio will graduate in May with a degree in psychology from the USC Dornsife College of Letters, Arts, and Sciences.

The Women of Troy claimed a share of the Pac-12 title with an 18-2 mark in league matches and received the No. 1 overall seed in the 2015 NCAA Division I Women’s Volleyball Championship. Head coach Mick Haley was named the Pac-12 and AVCA Pacific South Region Coach of the Year and led the Trojans to a 33-3 overall record with a fifth appearance in the NCAA Regional Championship match in six years.