USC officially opened construction on the USC Michelson Center for Convergent Bioscience — soon to be the largest building on campus and perhaps the catalyst for a biomedical research corridor in Los Angeles.

The center was made possible by a $50 million gift from philanthropist and retired orthopaedic spinal surgeon Gary K. Michelson and his wife, Alya Michelson. It will add 190,000 square feet of laboratories and offices for key researchers to the southwest quadrant of the University Park Campus. There, engineers and scientists will work together to tackle grand challenges in health and related fields.

The greatest advances in human history occur not merely when the sciences collaborate, but when they converge on a particular problem with strategy and purpose.

“The greatest advances in human history occur not merely when the sciences collaborate, but when they converge on a particular problem with strategy and purpose,” USC President C. L. Max Nikias told the standing-room only crowd.

Collaboration to come in shared spaces

Once it’s completed in 2017, the center will house about 25 to 30 investigators working in shared lab spaces that encourage collaboration.

Michelson underscored the importance of building momentum behind discoveries in engineering and the life sciences. Los Angeles is creating much-needed transportation and other infrastructure for its people, but Michelson called on the region to also focus on investment that could ease suffering and save lives.

“We have to get our government, on behalf of us collectively, to act — to invest catalytically in building out the infrastructure for a vast, medical research ecosystem that would be nucleated around the vision of this man,” Michelson said, indicating Nikias, “and this university and a commitment to medical research.”

Noting that USC is an engine for entrepreneurs, Michelson predicted Los Angeles will be the next hotbed for biomedical ventures. USC has long advocated creating biomedical research clusters that would foster new businesses and boost the economy. 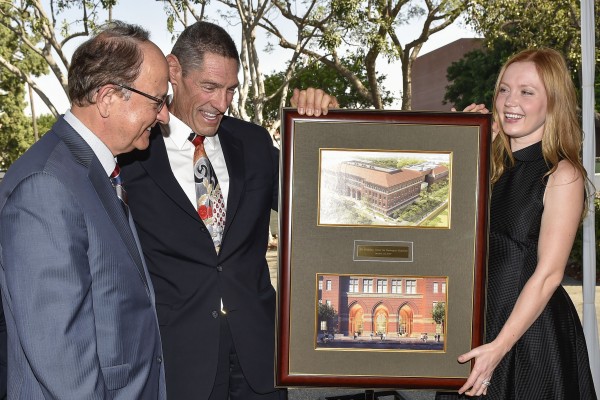 “Los Angeles should become to medical research what Silicon Valley is to information technology. We owe it to the world. We owe it to LA. We need to invest in this,” he said.

Michelson, whose own innovative work generated more patents as a sole author than Thomas Edison, has initiated life-changing research as an inventor, surgeon and philanthropist.

The center that bears his name lays the foundation for a new collaboration between the USC Dornsife College of Letters, Arts and Sciences and the USC Viterbi School of Engineering. Appropriately, it will be nestled between facilities for both schools — just west of the Dornsife Neuroscience Pavilion and north of the Olin Hall of Engineering.

Michelson’s transformative gift, announced in January, pushed USC past the halfway mark in its campaign to raise $6 billion or more in private philanthropy to advance the university’s mission of academic excellence and to advance research and scholarship that will address society’s most pressing challenges. As of the groundbreaking, the Campaign for the University of Southern California has raised $3.71 billion in more than three years.

Stevens is a pioneer in high-throughput structural biology, combining big-data computing with classical research techniques to explore the origins of cellular behavior. Kuhn, co-leader of the NIH-funded Southern California Physics Oncology Center at USC, is the inventor of a method for detecting cancer cells through a minimally invasive and inexpensive blood test.

“Having the right combinations of scientists and engineers — without silos, without barriers — we will make one of the biggest impacts on translational research efficiency as well as understanding the human body since the time of Leonardo da Vinci 500 years ago,” Stevens said, describing scientific forays since the famous polymath’s time as divergent and ever more specialized — something the USC Michelson Center is being built to overcome.

Together, Stevens and Kuhn will bring a cohort of about 50 researchers to the university. Also slated to lead efforts at the new facility are Steve Kay, dean of USC Dornsife, and Scott Fraser, Provost Professor of Biological Sciences and Biomedical Engineering with joint appointments at USC Dornsife, USC Viterbi and the Keck School of Medicine of USC. 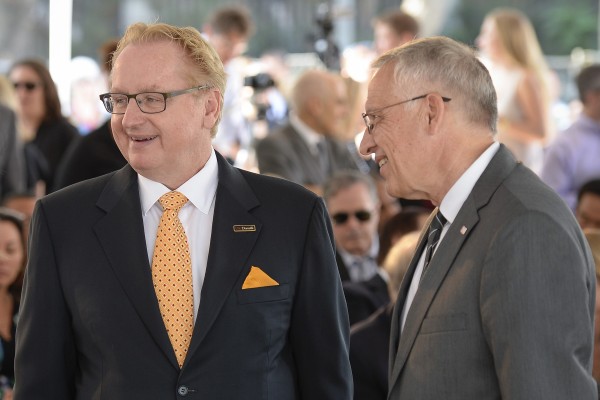 Kay said he’ll be honored to set up his lab in the building, noting he is “excited for my team to begin collaborating so closely with engineers to devise innovative diagnostic devices and treatments for diseases we now consider incurable.”

The center will house flexible labs, the Center for Electron Microscopy and Analysis, a nanofabrication facility and a suite of microscopy imaging technology. Equipped with the latest and best tools, researchers will attempt to fast-track the detection and curing of diseases.

“USC Michelson will be a world-class center of the accelerating convergence between the biosciences and engineering,” said Yannis C. Yortsos, dean of USC Viterbi. “Its outstanding faculty will conduct cutting-edge bioscience and bio-engineering research that will lead to breakthrough innovations for advancing human health.”

The scientist’s work has influenced studies on the interaction between nitrogen and the global carbon cycle.