Hundreds gathered to officially break ground on USC Village, a 1.25-million-square-foot residential and retail center that will reshape the university and its residential life.

“In the past four years, we have been privileged to break ground on a number of new projects at USC. But this village is an especially historic moment for USC, for our neighborhood and for Los Angeles as a whole,” USC President C. L. Max Nikias declared on Sept. 15 as Los Angeles civic leaders, students, faculty, staff and members of the community applauded at the ceremony, held on the leveled ground of what was once University Village just north of campus.

A living-learning home for students

Scheduled for completion in 2017, the USC Village will include a market, drugstore, a fitness center, a Trojan Town USC store, restaurants and outdoor dining, plenty of parking and a community room. 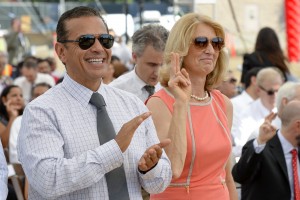 Tree-lined entrances will lead to a central plaza surrounded by outdoor dining and community-serving shops and cafes, along with a fountain and a statue of the female counterpart to Tommy Trojan — Hecuba, the queen of Troy.

A cluster of five-story residence halls and a clock tower in the Collegiate Gothic architectural style will rise above USC Village, housing up to 2,700 of USC’s top students under the mentorship of senior faculty masters.

“We are not merely building ‘buildings,’” Nikias said. “We are building, for our own time, the best and most timeless kind of human community.” 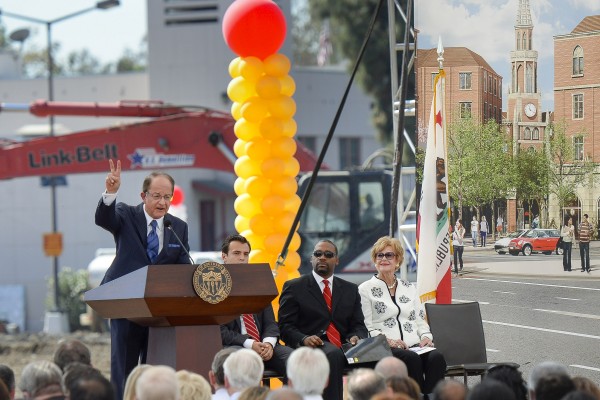 USC Village, which will increase the number of students in USC-owned housing by nearly 40 percent, further cements USC’s transition to a truly residential university, Nikias noted.

One of the people instrumental in making that happen attended the groundbreaking ceremony. USC Trustee Kathleen Leavey McCarthy and the Leavey Foundation donated $30 million last month to create the Thomas and Dorothy Leavey Foundation Honors Hall at the new USC Village.

The Leavey Foundation’s gift significantly boosts the Campaign for the University of Southern California, a multiyear effort that seeks to raise $6 billion or more in private philanthropy to advance USC’s academic priorities and expand its positive impact on the community and world. Three years after its launch, the campaign has raised more than $3.65 billion.

Development for the neighborhood

USC Village will replace the nearly 50-year-old University Village and will sit on 15 acres of land the university has owned for several years.

Lupe Garrido was one of hundreds of community members to attend meetings through the years in support of USC Village as the project was conceived. And she was there in 2012 when the Los Angeles City Council voted unanimously in favor of the USC Specific Plan.

“I am a witness to the beginning of this project and of USC’s commitment to our neighborhood,” said Garrido, whose son graduated from the USC Neighborhood Academic Initiative before earning his degree at the university. 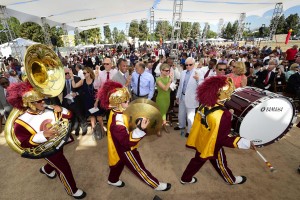 The Spirit of Troy roused the crowd at the official groundbreaking of USC Village. (USC Photo/Gus Ruelas)

The university will build USC Village without any public subsidies or taxpayer funds. USC also will provide more than $40 million in community benefits, including up to $20 million to an affordable housing fund managed by the city. The university will upgrade Jefferson Boulevard and fund construction of a new fire station, other roads around campus, a law clinic, a small business adviser and ombudsmen.

The project is expected to create thousands of permanent jobs and temporary construction jobs at USC, already the largest private employer in Los Angeles. USC has a project labor agreement and plans to fill at least 30 percent of the construction jobs locally.

“This is about an investment in the human infrastructure of this community,” Ridley-Thomas said. “Break ground and fight on.”

For USC Provost Elizabeth Garrett, the value of the university’s residential colleges isn’t a theory: It’s a firsthand experience.